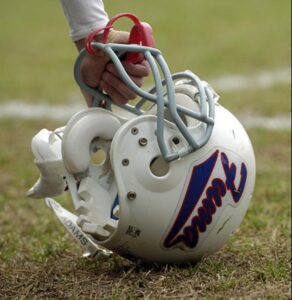 One of my favorite times of the year is after Thanksgiving. That is when the playoffs for the Virginia High School League football championship thunders into overdrive. For fifteen years I had one of the best seats for high school football as the public address announcer for Briar Woods High School in Loudoun County. The Falcons were always ready to tackle the very best teams from across the Commonwealth. From 2010 to 2013 Briar Woods had four appearances and three victories in state championship finals. Briar Woods sent many student athletes on to play collegiate football and two went on to play professionally. This led me to wonder which high school or prep school in Virginia has produced the most professional football players.

The answer can be found in the rolling countryside of Fluvanna County: Fork Union Military Academy. Since 1899, the all-male military school has produced a staggering 117 professional football players. It all started when FUMA graduate John Lascari moved on to play college ball at Georgetown and then pressed on to play ten games for the New York Giants in 1924. Lascari caught three passes and one touchdown.

Since then, the Blue Devils have produced some of the very best professional players of the past forty years. Back in 1980, Al Testaverde drove from New York to Fork Union with his son Vinny to explore the possibilities of a post graduate prep year. After a tour of campus and meeting with coaches Al turned to his son and said:

“Son you are going there.”

The highly talented quarterback was in need of  preparation for life, improved grades, and a chastening for personal conduct in order to pursue the dream of a college football career.

Years later, Vinny Testaverde said, “It was the best decision my father ever made for me.”
His experience at FUMA unlocked the doors to a scholarship at the University of Miami, the 1986 Heisman Trophy, becoming the number one pick in the 1987 draft, 46,000 passing yards, and a 21-year professional career.

Another Heisman winner who donned the blue and red jersey of Fork Union was running back Eddie George. Three seasons of the spartan military life of Fork Union ushered in a legendary career at Ohio State, franchise records for the Tennessee Titans, and the start of a college football coaching journey at Tennessee State. Eddie George had this to say about FUMA:

“This was the cornerstone for where I am today. That’s how much Fork Union means to me.”

The honor roll of alumni from Fork Union Military Academy who have played professional football is indeed impressive. Many are familiar and legendary names and others only briefly ascended the heavenly pantheon of the gridiron.

Fork Union’s record of preparation for a football life is unmatched. In Virginia, the next closest school is Fork Union’s arch-rival, Hargrave Military Academy in Chatham: 31 Tigers moved up to the NFL. In the realm of public schools only powerhouses such as Hampton or Highland Springs can amass double digits in pro football players. Two hundred and forty Virginia schools have sent at least one player to the pros for a total of 669 paid athletes. According to Pro Football Reference, no other school in the United States has sent more players to the National Football League than the Blue Devils.

Sports journalist Adam Kramer chronicled daily life for the student athletes of Fork Union in an article entitled “Last Chance High.” I couldn’t help but notice a former student of mine that I had often wondered about. He was a singular athletic talent for Briar Woods High, but outside influences had derailed his high school athletic dreams. Fork Union brought this young man back from the shadows and sent him on to Norfolk State University. As a backup quarterback, he received no Heisman trophies, but did earn a college degree and a promising start on a new life.

The Fork Union alma mater best captures the spirit of preparing the Body, Mind, and Spirit.

“All Cadets, past and present … FUMA men are we.”

Some of the best football in Virginia can be enjoyed this coming Saturday and the next. It is likely in your own hometown. Head out and celebrate the achievements of student athletes as they compete for the Virginia High School League championships.

This entry was posted in Education (K-12) and tagged football, Fork Union. Bookmark the permalink.