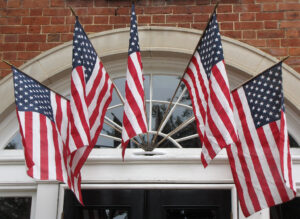 On March 3, 2021, the Fairfax County Planning Commission recommended
against adopting proposed regulations governing the number, size and
setbacks of flags and flagpoles.

“This was a solution, looking for a problem,” said Planning Commission
Vice Chairman John Ulfelder. “I suspect, based on a lot of comments we’ve
received, a lot of other people perceived it the same way. If it ain’t
broken, don’t fix it.”

On March 9, 2021, the Board of Supervisors held approximately five hours of testimony, in which the decision was made to defer the decision for two weeks until 4:30 p.m. March 23. It’s not clear the board will see things the same way as Ulfelder.

“This proposal didn’t come from nowhere,” said Board Chair Jeffrey C.
McKay. “If you had only watched some of the media conversations about
this, you would think Fairfax is the only jurisdiction that has enacted
rules like this before. The public discussion about the zoning change got
off the rails in a way that’s unfortunate.”

As I reflect upon McKay’s vacuous statement, the words of George Orwell’s
“Politics and the English Language” come to mind. Orwell deplored sloppy
and careless rhetoric — “lack of precision,” “inflated prose,” and
“mixture of vagueness and sheer incompetence.”

“Political speech and writing are largely the defense of the
indefensible,” he wrote. “Political language has to consist largely of
euphemism, question-begging and sheer cloudy vagueness.”

We can break McKay’s statement into three distinct thought fragments: (1)
the flag proposal didn’t “come from nowhere,” (2) neighboring districts
are doing it, too, and (3) the discussion got off the rails. Using Orwell
as a guide and inspiration, I will illuminate the sloppiness of each.

Where did the proposal come from? The Zoning Ordinance Modernization project (zMOD) kicked off in 2018 to modernize the 1978 ordinances. With regard to flags, the Planning Commission stated, “As a result of recent inquiries related to flags, staff researched the standards applied to jurisdictions.” The document then recited the zoning ordinances of the City of Fairfax and Arlington County.

The proposed zoning ordinance states as its purpose and intent: “The
Zoning Ordinance is intended to promote the health, safety, and general
welfare of the public and to implement the Comprehensive Plan for the
orderly and controlled development of the County.”

Just how does regulating flags and flagpoles promote health, safety or the
and general welfare? What societal harm stems from the display of flags? Given the self-evident abridgment to property rights, freedom of
expression and the rights of the people enshrined in the U.S.
Constitution, there must be a clear and compelling reason to restrict
their display. But McKay’s verbiage provides no clue what that might be.

Neither does the background information disseminated by the county. The
regulations appear to be arbitrary, capricious, and an abuse of
discretion. Citizens should insist that laws, statutes, and ordinances
have clear, logical reasons for enactment. The whim of public officials
does not suffice.

Neighboring districts are doing it. The Board staff didn’t explain why
neighboring jurisdictions enacted flagpole regulations. We all remember
our parents telling us, “Just because everyone else is jumping off a
bridge doesn’t mean you have to, too.” This justification is indefensible.

The discussion went off the rails in an unfortunate way. I take this
reason to mean, “It’s unfortunate the public is meddling in our business
of doing what we want to do, whether it’s justifiable or not.” Just because the Board has the power to regulate flagpoles doesn’t mean that it should. The Board needs to articulate a reason for doing so. McKay’s explanation, to borrow from Orwell, is lazy, inflated, question-begging prose.

As elected officials, board members have a duty to explain why they are
busy concocting flagpole regulations at a time that Fairfax County is
beset with so many challenges.

Fairfax County Public Schools are struggling. Research reveals
students sliding backward thanks to online learning, with the most
vulnerable students the most affected. The Immigration Reform Law Institute ranked Fairfax County (tied with Montgomery County, Maryland) as seventh in its list of America’s Ten Worst Sanctuary Communities based on crime
statistics and details of particularly egregious crimes. Meanwhile, the
Board is grappling with transportation congestion, affordable housing,
declining sales tax receipts, a host of environmental issues, and what
the 2021 Strategic Plan describes as “the sudden inability of many of
our residents to meet their most basic needs and support their families.”

Regrettably, we have arrived at the point where our public officials no
longer think they have to provide us reasons for doing what they’re doing.
We need to utilize Orwell’s tools to hold our local officials to account. When we hear something that doesn’t add up, don’t brush it aside. Demand clarity, precision, logic, and answers to discrepancies. This is the way we can effect change and maybe curtail the further erosion of our rights.

This entry was posted in Land use & development, Property rights, Regulation and tagged Guest contributors. Bookmark the permalink.