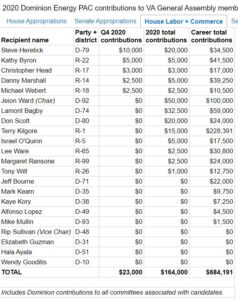 Click for clear view. Dominion Energy Virginia donations to legislators on the House Labor and Commerce Committee, compiled by Energy and Policy Institute from VPAP reports.

The first major showdown over last-ditch efforts to change the rules on the coming Dominion Energy Virginia rate case occurs Monday in a subcommittee where six delegates received a total of $80,000 from the utility in 2020, and four received $67,500 from its self-appointed watchdog Clean Virginia.

The chair of the subcommittee, Del. Richard “Rip” Sullivan of Arlington, received $15,000 from Clean Virginia, but the chair of the full Labor and Commerce Committee, Del. Jeion Ward of Newport News, might sit in the meeting, as is within her authority. Dominion contributed $50,000 to her campaign in 2020. Both are Democrats. (If Ward is there, the total Dominion donations in the room will reach $130,000.)

There is a useful tracking table on an Energy and Policy Institute web page. Look about half-way down. It provides donor information on Dominion (but not Clean Virginia) for several key committees. It doesn’t report on Clean Virginia’s money because I presume it shares the common misconception that while Dominion’s money is tainted, Clean Virginia’s is virtuous. Both corrupt the process.

This of course is a major reason why these well-intentioned folks who claim to love Virginia’s energy consumers always founder. Clean Virginia’s efforts to match Dominion’s dollars are also now cited as the main excuse for the annual ritual of killing any and all bills seeking to limit the amount of campaign contributions from utilities.

Two 2021 bills that would have limited contributions from utilities and other public service corporations, here and here, are already dead. One of the patrons, Sen. Chap Petersen, D-Fairfax, also submitted a bill to impose campaign donation limits on any support for a statewide candidate, also already dead.

The other problem groups like Clean Virginia face in these debates — and several of the environmental groups have the same problem — is they don’t consistently favor restoring the State Corporation Commission’s full traditional authority.  Any bill to do that would also strip out all the provisions that declare billions in coming solar and wind projects to be “in the public interest” and all but mandatory.

That point was raised Wednesday as the first of these “rate case reform” efforts was crushed in a Senate energy issues subcommittee The bill from Senator Jennifer McClellan, D-Richmond, altered the formula for Dominion customer refunds, on the unlikely chance any such refunds are ordered.  (McClellan, Clean Virginia, $105,000 in 2020.)

After various environmental groups endorsed it, two Republican members pointed to their inconsistent position on SCC autonomy.  Watch here, the first bill up.

That subcommittee’s donation pattern?  Dominion donated $180,000 to the five senators during 2020, and Clean Virginia nothing.  Include the chairman of the full Commerce and Labor Committee, Senator Richard Saslaw, D-Fairfax, and the score is $230,000 to nothing.  All Clean Virginia has accomplished is to drive up legislative donations and heighten the impression of corruption.

The debate in the Senate subcommittee will probably exactly parallel what happens Monday morning.

Defenders of the utility law status quo will argue that as Dominion enters this huge building phase to comply with the Virginia Clean Economy Act, beloved of Democrats, it has based its plans on the current financial rules.  Change those rules and it will ripple to Wall Street, raising capital costs or harming company stockholders.  Wall Street analysts do watch this.  One calls me sometimes.

Somebody pointed out that Dominion itself has brought legislation that changed the rules on a pending rate case, always making its position stronger and weakening consumers.  A good example was 2013, when the rules were changed for accounting for storm damage in the wake of the Summer 2012 derecho.  That tweak prevented the SCC from finding that the utility had earned excess profits, always the key issue in these cases.

That bill followed “a year of stakeholder work,” responded Dominion VP and lobbyist Bill Murray in the meeting.  Absolutely false.  The 2013 bill was worked out behind closed doors, with consumers locked out, between Dominion and then Attorney General Ken Cuccinelli.  Cuccinelli had become a critic of the rate statute earlier in the year, and took comments from consumer groups, but then allowed nobody else at the negotiating table.

In what has since become a pattern with these things, the bill was then revealed at the last minute and Cuccinelli had endorsed it before the rest of us had even read it.  Game, set, match to Dominion.  It was not nearly the big consumer win he claimed.

In this session, Dominion is seeking a high dollar change in how it will account for ratepayer money it spent to pay off overdue electric bills.  Senator George Barker, D-Fairfax, has a budget amendment that deals with that, and it is not favorable to the average consumer.  So, complaints from the utility about late-minute changes are bogus.  (Barker, Dominion, $10,000 in 2020)

Most of the ideas contained in the various bills on Monday’s subcommittee docket are valid and might help consumers a bit if enacted.  The best are two that run through the statue changing “shall” to “may” in several references to SCC discretion.  It is even possible some of them will survive to pass the House, only to reach that Subcommittee of Death on the Senate side.

But do not be surprised if they all get tabled or passed by on votes of 6 to 4, and as to why, I refer you back to the first paragraph.