WaPo Ratchets Up Assault on VMI

After accusing the Virginia Military Institute of maintaining an environment of “relentless racism” and implying that VMI’s commandant is a racist, The Washington Post now is targeting the military academy’s honor code as archaic, excessively harsh, and discriminatory against minorities.

In an interview this week, interim Superintendent Cedric T. Wins said he doesn’t intend to change the honor code, which forbids lying, cheating and stealing, WaPo staffer Ian Shapira wrote. “Instead, he is evaluating the student-run justice system that enforces that code.” Shapira went on to criticize the “single-sanction” penalty, expulsion, describe how other service academies have abandoned the single sanction, and highlight “startling” racial disparities among the cadets being punished.

The VMI Board of Visitors took the remarkable step yesterday of releasing a full transcript of that interview.

The board was fully justified in making that decision. Shapira’s reporting has been disgracefully one-sided. Perhaps the worst was a hit piece published a week ago that insinuated that the retirement of Commandant of Cadets William “Bill” Wanovich was tied to an investigation of racism at VMI.

Character assassination. There was no connection whatsoever between the announcement of Wanovich’s planned departure at the end of the academic year and the investigation called for by Governor Ralph Northam in response to previous Washington Post allegations of institutional racism — and Wins reiterated that point during the board meeting yesterday.

A VMI graduate, Wanovich served several years as commandant before announcing his retirement to the previous Superintendent J.H. Binford Peay III.  The commandant is in charge of the cadets’ military training, which includes overseeing the infamous “rat line,” an adversarial system resembling basic training in which older cadets have license to make the young “rats” miserable in order to remold them into cadets. The commandant must strike a balance between upholding the tradition and ensuring that the older cadets don’t carried away. Just last year, a federal judge heard a case in which five cadets were alleged to have bound and gagged two rats, waterboarded them, forced them to strip off their shirts, and then wrestle one another. It was not a sanctioned activity, and Wanovich was involved with investigating the incident and disciplining the older cadets. (They were suspended.) The commandant has to deal with unhappy students, unhappy parents, and the occasional lawsuit. It is a tough job, a draining job. And Wanovich served in the position longer than most — the third longest of any commandant in VMI’s 150-year history.

Wanovich gave notice in September that he would serve out the year and then retire. The Post published its first story — “Black Cadets still endure relentless racism” — Oct. 17, long after Wanovich gave notice. There was no reason to rush the announcement of the commandant’s departure, but VMI got around to sending out a press release Jan. 22. His youngest daughter, Grace, was going to graduate in June, the press release noted, which meant that Wanovich and his wife would become empty nesters. “Bill and Tina look forward to spending more time with their families and enjoying their grandson Finley,” the announcement said.

The story kicked off this way:

The commandant of the Virginia Military Institute, William “Bill” Wanovich, who came under scrutiny for posing in a photo mocking Hispanics at a campus Halloween party three years ago, is retiring at the end of the academic year, the college announced Friday.

Writer Ian Shapira then proceeded to recount allegations raised in those stories, including a 2017 incident in which Wanovich “posed in a picture taken at the cadets’ annual Halloween costume party alongside students dressed in cardboard boxes as ”Trump’s Wall.’ The words ‘Keep Out’ and ‘No Cholos,’ a slur against Mexicans, were scrawled on the students’ costume.”

He then recounted an incident involving a first-year black Hispanic student, Rafael Jenkins, who was “threatened with a lynching by a White student” in August 2018. (Shapira’s brief account in the Wanovich article omitted important context: that Jenkins was in the rat line at the time of  the incident, that the older white student was engaging in hyperbolic “drill sergeant” rhetoric that no one took literally, and that VMI subsequently suspended him anyway.) Jenkins’ father told Wanovich that he wanted the white student expelled. Wanovich responded by saying that many of VMI’s cadets had grown up in racist homes and that he hoped the college could change them. Shapira did not explain how such a sentiment is racist. (For the record, Wanovich told the Post he recalled the conversation differently.)

Only by the 11th paragraph did Shapira get around to quoting VMI spokesman Bill Wyatt as saying that Wanovich’s decision to retire had nothing to do with the controversy over the Trump border-wall picture or the state investigation into racism. Wrote Shapira: “He said Wanovich had been planning the move since September and wanted to spend more time with his family.”

No cholos. Shapira’s propensity for slanting stories was on full display in his description of the Halloween costume party incident. His most detailed account appeared in his first article about VMI:

VMI administrators have been among those involved in racist incidents. In 2017, Col. William Wanovich, the school’s commandant of cadets, appeared in a Halloween photo of cadets dressed up in boxes as President Trump’s border wall with the words “Keep Out” and “No Cholos,” a slur against Mexicans. Wanovich, a member of the Class of 1987, didn’t return a message seeking comment. At the time, VMI said the costume was “in poor taste” and “offensive” but has since declined to reveal whether Wanovich was ever disciplined.

Context is everything, and Shapira did not provide it. The traditional Halloween costume party is a chance for the strictly regimented cadets to blow off steam. Hundreds of students in costumes were wandering around the VMI grounds and having fun. Consumption of alcohol is prohibited, but college kids are college kids and they sometimes do stupid stuff. It was the commandant’s job to patrol the grounds and make sure everyone was behaving themselves. Students took hundreds of pictures during the celebration, and Wanovich appeared in many of them.

Here’s the photo in question, which was posted on a Latino Rebels website: 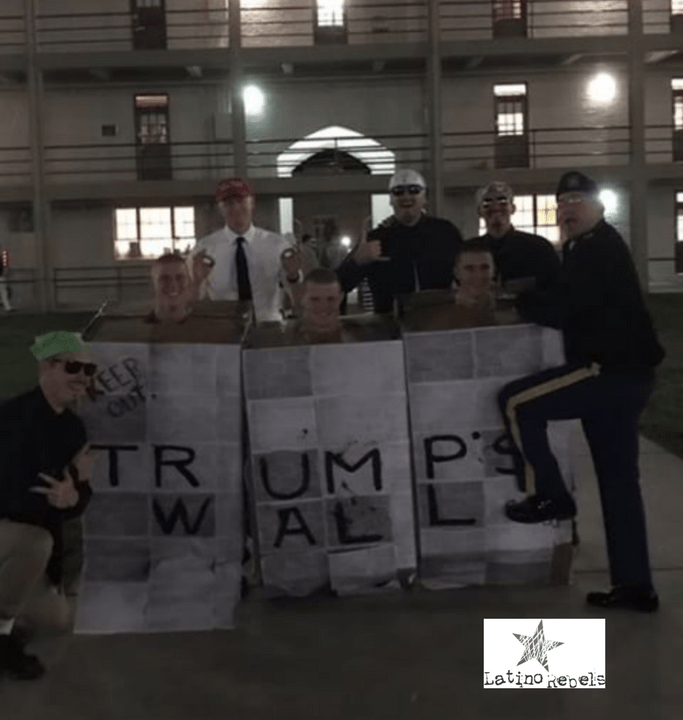 The words “Keep out” are visible in smaller letters. “No cholos” is not. (The phrase may be covered by Wanovich’s foot.)

For the edification of Bacon’s Rebellion readers who might never have heard the term before, Britannica.com defines “cholo” this way: A cholo is “a young person who participates in or identifies with Mexican American gang subculture. The term, sometimes used disparagingly, is derived from early Spanish and Mexican usage and denotes marginalization. The cholo subculture originated in the barrio (neighborhood) street gangs of Southern California.”

In mugging for the camera by posing as if he is trying to crawl over the wall, one could argue that Wanovich was making a light-hearted political statement regarding border policy. But Shapira presented no evidence that Wanovich endorsed the use of the ethnic term “cholos” — or even that he noticed it. Yet this is one of the dozen or so incidents highlighted in Shapira’s indictment of VMI as a “relentlessly racist” institution, which prompted Governor Ralph Northam to appoint a state investigation.

An assumption of racism. In the latest article, Shapira also suggests, based on the high percentage of African Americans and other minorities who have been convicted of violations, that the VMI honor code is racist.

Shapira raised the issue of racial disparities in his interview with Wins, who himself is African American. He did not see fit in the latest article to provide Wins’ response. Here is the exchange:

Shapira: I reported back in December that honor code violations, that minority students and Black students have been disproportionately expelled by the honor system, and I wanted to ask you specifically, does this concern you?

Wins: Yeah, so I appreciate that question because the numbers we provided to you were numbers that I had asked for. And so I see that when you look strictly at the numbers, there is a disproportionate appearance of the numbers, and so there’s no denying that. What I’m most concerned with here at VMI is whether there’s a causal relationship that would suggest that given those numbers, that there is some inappropriate type of targeting or something like that that would occur. The other point I would make is that when it comes to honor court cases, Ian, the numbers on a year-to-year basis are extremely low, less than 1 percent of the students who are asked to leave VMI are the result of honor court cases. And furthermore, the majority of honor court cases typically come about through the reporting of faculty with respect to the suspicion of cheating by a cadet.

Shapira can conceive of no other explanation for a disparity in convictions than racism. Wins, by contrast, is not rushing to pre-judge. Indeed, his last sentence  — the majority of honor offenses are for cheating, and they are reported by professors — leads to a possible alternative explanation.

While African Americans comprise only 6% of the cadet corps, they are disproportionately numbered among the student athletes. VMI publishes no data on the breakdown of SAT scores among its athletes, but it is possible — it certainly has occurred at other universities — that athletes have lower academic aptitudes on average, are more likely to find themselves floundering in class, and face greater temptation to cheat. There are no cupcake courses at VMI. The Institute maintains higher, unforgiving standards for everyone. While we do not know this to be the reason for the disparity in honor code outcomes, it is a plausible alternative explanation. Racism cannot be assumed.

Cultural upheaval. Shapira brushes up against the truth when he describes the debate over the honor code as “part of a cultural upheaval engulfing VMI.” Clearly, cultural values are changing nationally, including attitudes toward lying cheating and stealing. Cultural relativism and situational ethics prevail today. VMI is the old guard that upholds the old standards.

The Post’s assault on VMI’s reputation should be seen in the light of the larger culture wars raging in the United States. The cultural Left has vanquished and occupied almost every higher-ed institution in the country. Only a few handful of institutions reflecting traditional values remain. VMI is one of them. Therefore, it must be crushed.