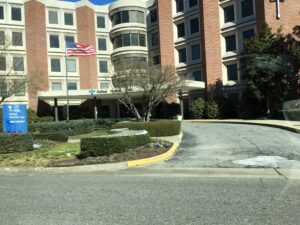 Not too long ago, before the decline of the malls and COVID, the healthcare community coined what they called the Nordstrom Rule.

The meaning was that if you wished to optimize profits in your healthcare business, build it close to a Nordstrom. The theory was that Nordstrom had already done the market research to identify concentrations of wealthy customers.

I wrote yesterday about the Sisters of Charity and Bon Secours, Catholic charities both. The Sisters were not in it to serve wealthy patients. They purposely located their hospitals among the poor. So 19th and 20th century of them.

The Virginia Department of Health brokered the closing of Bayside in 2008 under the cover of the Certificate of Public Need (COPN) process that fatally wounded DePaul, allowing Sentara to relocate the Bayside beds to the new Sentara Princess Anne, far from the minority citizens of Bayside.

The closest hospital for many residents served by Bayside was then, you guessed it, DePaul. No longer.

More about that legendary and devastatingly unfair and anticompetitive COPN decision next time.

Today we’ll talk about the gleaming cornerstone of Sentara’s Hampton Roads monopoly, Norfolk General Hospital, and until now its only competitor in Norfolk and Virginia Beach, Bon Secours DePaul Hospital, which announced this week it was closing as an inpatient hospital and emergency room.

Sentara is now unopposed in the hospital markets of Virginia’s two largest cities. I hope the sommeliers at Sentara headquarters in Norfolk were prepared for the surge in demand.

If you drive near DePaul hospital, either you live there or DePaul is likely your destination.

The surrounding area is mostly low cost and assisted cost apartments, very small but neat working class houses and low end strip malls. Granby High School is there, as are a few churches and a synagogue, but those do not define the area. Economically disadvantaged families and DePaul Hospital do.

It is easy to see, if you know the history of the area, what the Sisters of Charity saw at the end of the Great Depression with the coming of WW II.

They saw the mass migration of tens of thousands of people, their personal fortunes ravaged by the Depression, moving to Norfolk seeking work in the expanding shipyards, naval bases and port. They built their new DePaul hospital to serve those workers where they were settling. DePaul opened in 1944 in a section of the city then about half white and half black between the Elizabeth River and Norfolk Naval Base.

Most patients of the new DePaul in 1944 could not pay, or could only pay a little if they had found those jobs, but that is what today we would call a feature not a bug to the Sisters. There was no Medicaid, no Medicare. Just the Sisters, their mission and the Catholic church that funded their efforts.

DePaul has failed for a number of reasons including in no particular order:

It worked. DePaul as a hospital and emergency center is dead. COPN and Sentara together (which is perhaps an unnecessary qualifier) have a kill. The physicians practices that DePaul leaves behind in Norfolk have nowhere else to go but Sentara for hospital privileges.

Stuffing and mounting DePaul on the wall is the only thing that will escape them.

The cornerstone of the Sentara empire, Norfolk General Hospital, in direct contrast to DePaul is located in the exact center of the money and power in Norfolk. A drive from DePaul to Norfolk General is a ride through nearly every level of economic success, starting among the poorest citizens and arriving at the doorsteps of Norfolk’s wealthiest and most powerful people.

Norfolk General’s gleaming towers overlook the Elizabeth River, the mansions of the Hague and Ghent, the Chrysler Museum, the Harrison Opera House — you get the idea.

I wager that few who live in that area could find DePaul Hospital on a map. The right people are not interested in such places. DePaul would certainly not make for proper conversation at Ghent cocktail parties. They are only woke to a point that the consequences do not reach their doors.

And yes, Nordstrom located its Norfolk emporium near Norfolk General Hospital 20 years ago. In this case, flipping the old saying, Sentara had already done the market research for Nordstrom.

I am going to try to postpone the Sentara celebration by offering for consideration a use for the massive DePaul infrastructure.

I strongly recommend the sale or gift of the DePaul complex to either Mayo Clinic or Cleveland Clinic to serve as their mid-Atlantic campus.

A campus of a world-class health system will serve patients near DePaul but not depend upon the cash flows they generate. Such a facility, like every other Mayo and Cleveland Clinic campus, will be a huge draw for medical tourism. The property is just off I-64 and very close to the airport. The new tunnel will make access much quicker from the west.

Mayo and or/Cleveland Clinic may very well find this appealing if it is marketed and incentivized properly. It is what they do, and neither has a mid-Atlantic campus.

There are at least four distinct benefits to such a course of action for the Commonwealth and Hampton Roads:

I hope the Governor, Virginia’s Health Commissioner (final decision authority on COPN), Norfolk’s Mayor and City Council and every politically-connected individual and interest group in Hampton Roads will get behind this effort.

They certainly owe us one.