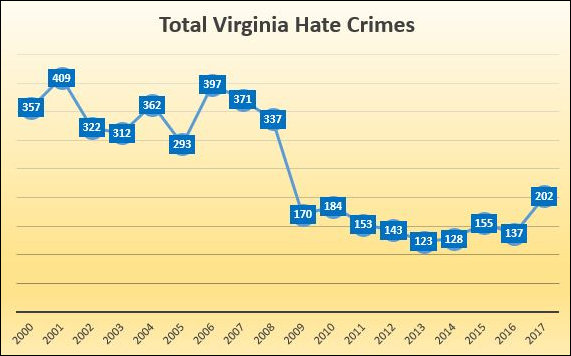 “Hate is turning deadly with frightening frequency in America,” wrote Virginia Attorney General Mark R. Herring in an anguished Washington Post op-ed last month. In building his case, he cited the 11 Jews slain recently in Pittsburgh; the killing of two African-Americans in Louisville, and Dylann Roof’s murderous rampage at the Emanuel African Methodist Episcopal Church in Charleston, S.C. No litany of hate crimes would be complete without mentioning the white supremacist rally in Charlottesville last year that resulted in the death of counter-protester Heather Heyer.

“It is well past time for us to acknowledge the real, growing and deadly threat posed by hate and white supremacist violence,” Herring wrote. “In Virginia and around the country, we have seen far too many alarming reminders that we cannot dismiss this growing wave of hate as a harmless fringe element. … The threat is real, and the consequences can be deadly.”

To back up his claim of a white-supremacist threat, he cited Virginia State Police data indicating that “hate crimes are up 64 percent in Virginia since 2013.”

Then, to promote a legislative package seeking authority “to prosecute hate crimes and … better protect our citizens from violence and intimidation by white-supremacist militias, gangs, and organizations,” he took his act on the road. In Loudoun County he kicked off what the local newspaper described as a “roundtable tour to combat hate crimes and white supremacist violence.”

There’s only one thing wrong with Herring’s case: almost everything.

There is no wave of white-supremacist hate crimes in Virginia. Herring is peddling pure fantasy. By stoking fears, he only makes racial and ethnic tensions more fraught. His rhetoric is reckless, and it needs to stop.

First, the 11 Jews slain in their synagogue lived in Pennsylvania, not Virginia. The two African-Americans were killed in Louisville, Ky., not Virginia. Dylann Roof committed his atrocity in South Carolina, not Virginia. And James Allen Field, being tried for the murder of Heather Heyer, may have committed his crime in Virginia but he, like nearly all of the white supremacists attending the Unite the Right rally, came from out of state. He grew up in Kentucky and resided in Toledo, Ohio. And by the way, he was just convicted of first-degree murder and sentenced to life in prison plus 419 years.

While Herring hypes the white supremacist threat, others have concluded that it is receding. Since Charlottesville, white supremacist rallies have been a bust. The movement has fractured, found a recent Wall Street Journal investigation. “Infighting, lawsuits and a social-media crackdown are hampering white nationalist and other right-wing groups,”

“The Alt-Right appears to be falling apart,” writes Jason Wilson in the Leftist Guardian newspaper, who credits militant anti-fascist groups like Antifa for its decline. “It seems that the white supremacist alt-right will not survive the Trump era as a coherent movement.”

Just as Herring has hyperbolized white supremacist activity, he has exaggerated the prevalence of hate crimes Of the 4,555 hate crimes reported to the Virginia State Police since 2000, only five were homicides. Two of those occurred in 2017, but there had been zero during the six previous years. That compares to 412 murder/homicides across Virginia just last year. Of the 1,894 forcible rapes last year, only one was deemed a hate crime. Of 10,092 aggravated assaults, only 14 were classified as hate crimes.

The overwhelming majority of crimes that Herring has ginned up into a threat of “violence and intimidation by white-supremacist militias, gangs, and organizations” hate crimes in 2017 fell into one of three categories: vandalism, simple assaults and intimidation. Ninety-three were acts of vandalism – many of which likely consisted of spray painting. Eighty-four involved “simple assaults” and “intimidation,” categories of charges that rarely result in actual physical harm.

Second, while Herring is technically correct to say that the number of hate crimes in Virginia has risen in the past five years, he is cherry-picking data. According to Virginia State Police annual crime reports, the number of hate crimes did increase from 123 in 2013 to 202 last year. But Herring selected the year with the fewest hate crimes in the past 18 years as his baseline for comparison. A longer-term look at the VSP data, displayed in the chart above, shows hate crimes bouncing around between 300 and 400 yearly until 2008 – coinciding with the election of President Obama  – at which point the number dropped precipitously and bounced around between 100 and 200 yearly. The year 2017 did see a mini-spike. Any uptick is cause for concern but it is too early to conclude that was the beginning of a trend, not an aberration. 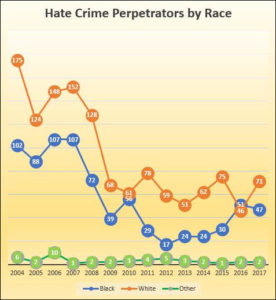 Third, you would never imagine it from Herring’s rhetoric, not all hate crimes are caused by white supremacists. Of the hate crimes in which the perpetrator’s race was known, 37 percent were committed since 2000 by people identified as black and 2 percent by  those identified as belonging to other races. In 2016, more blacks committed hate crimes than whites.

I share Herring’s view that white supremacists are a blight and abomination on American society. They deserve no sympathy or compassion. But the last thing Virginia needs is for the attorney general to create hysteria about “white-supremacist militias, gangs, and organizations” the existence of which in Virginia he has not offered a shred of evidence. The truth is, hate crimes have declined dramatically since 2000. This, by any reckoning, should be treated as good news and a positive trend in a free and diverse society.

To view graphs displaying 17 years of data on hate crime victims broken down by race, click on “Continue Reading.” 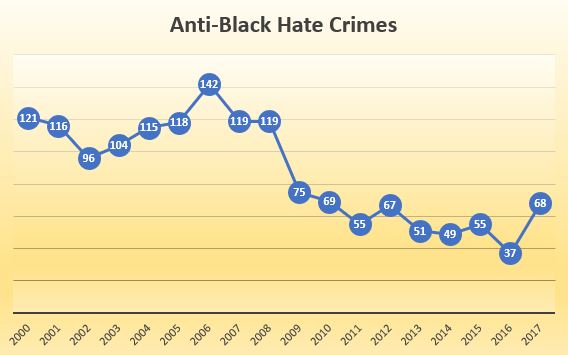 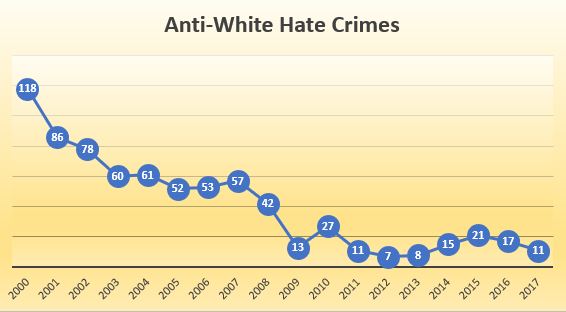 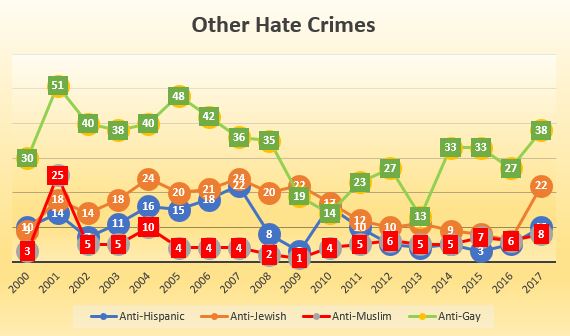 Note: “Anti-Muslim” hate crimes do not include “Anti-Arab” crimes, which were common after the 9/11 terror attack. The Virginia State Police stopped tracking anti-Arab crimes as a separate category several years later.

This entry was posted in Crime , corrections and law enforcement, Individual liberties and tagged James A. Bacon. Bookmark the permalink.