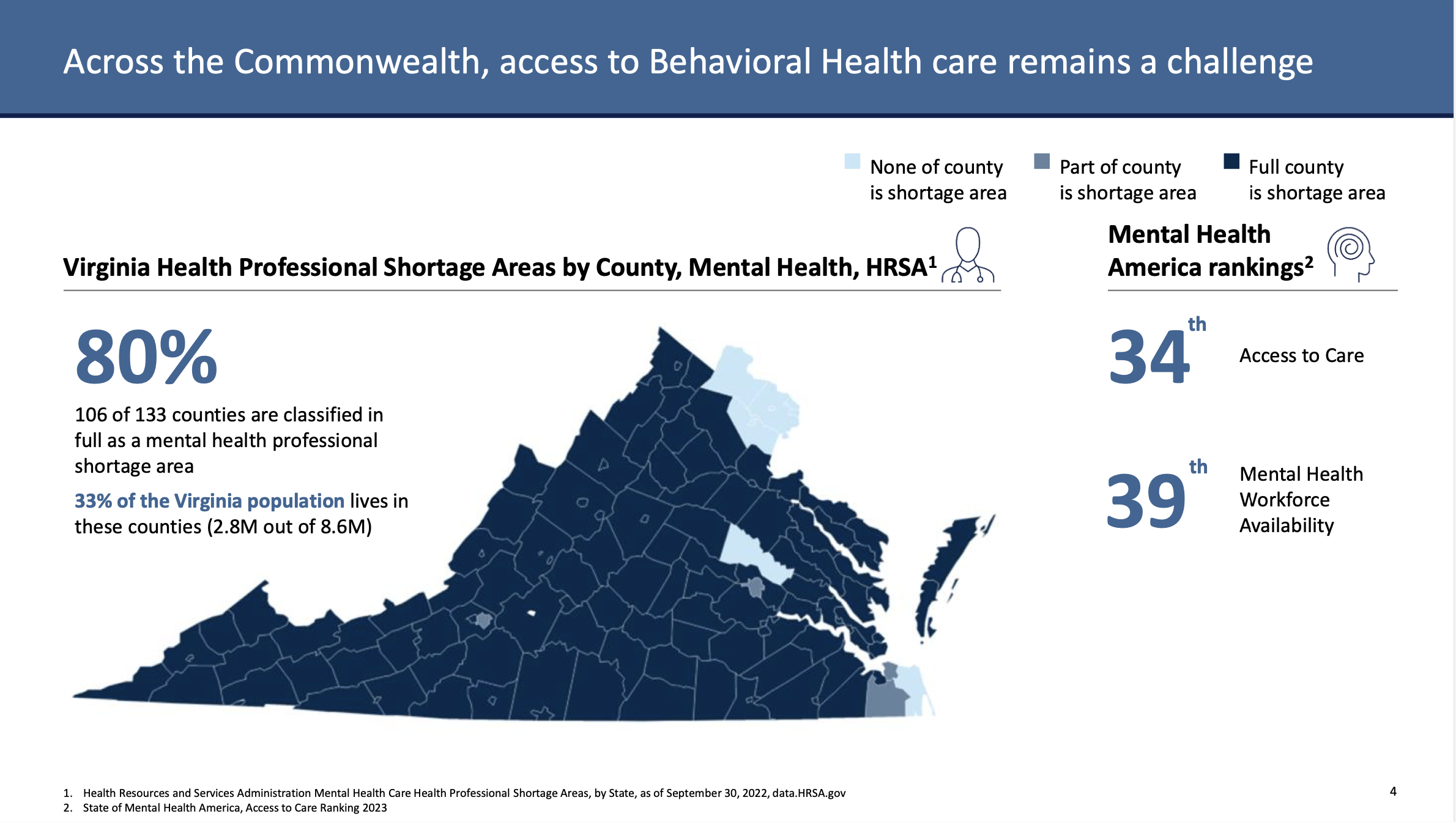 There is fundamental agreement in Richmond over mental health services.

From the Richmond Times-Dispatch:

Virginia’s forecasts of long-term budget surpluses mean this year’s General Assembly has a chance to catch up with years of under-funding Virginia schools and the state’s behavioral health system, General Assembly Democrats say.

To govern is to choose. “Democrats” may wish they had used different words than “years of underfunding,” considering who had control in Richmond in 2020 and 2021.

But it is actually helpful that they now think even the governor’s proposal for a 20% increase in the mental health budget approved last year is not enough. If (a big if) more money can be spent efficiently and effectively.

The governor has proposed a $230 million increase in behavioral health program spending over what was approved last year.

So, as the old saying goes, they are just discussing price.

Let’s look at the behavioral health situation to see why.

Agreement on causation of the crisis. Dr. Dan Carey held Secretary Littel’s job for Ralph Northam. Governor Youngkin and Secretary Littel listened to his statement in May of 2021, nearing the end of the school shutdowns in many districts:

We continue to address the impact of the COVID-19 pandemic in the commonwealth.

We know, of course, that the virus has affected the physical health of hundreds of thousands of Virginians, but less visible has been the ways in which this public health emergency has influenced the mental health of Virginians.

This is particularly true of children who often internalize the anxieties and stress brought about by the disruptions to their normal lives. I would encourage parents to seek help from their child’s medical provider for any mental health concerns.

So, “the impact of the COVID-19 pandemic” caused the surge in demand for youth mental health services. Indeed, that was the specific reason given by Dr. Carey when he encouraged “parents to seek help from their child’s medical provider for any mental health concerns.”

But the increased demand overwhelmed the existing system.

Shortages of trained professionals. I don’t know if more money than is being asked for by the administration can be efficiently and effectively spent. Maybe. Maybe not. The Governor and Secretary Littel, who proposed that increase, will answer that.

But we do know that mental health support in Virginia has been severely constrained by lack of trained professionals.  See the opening figure above.

We also know that, by the beginning of this decade, mental health care for children and adolescents had borne the brunt of those shortages. 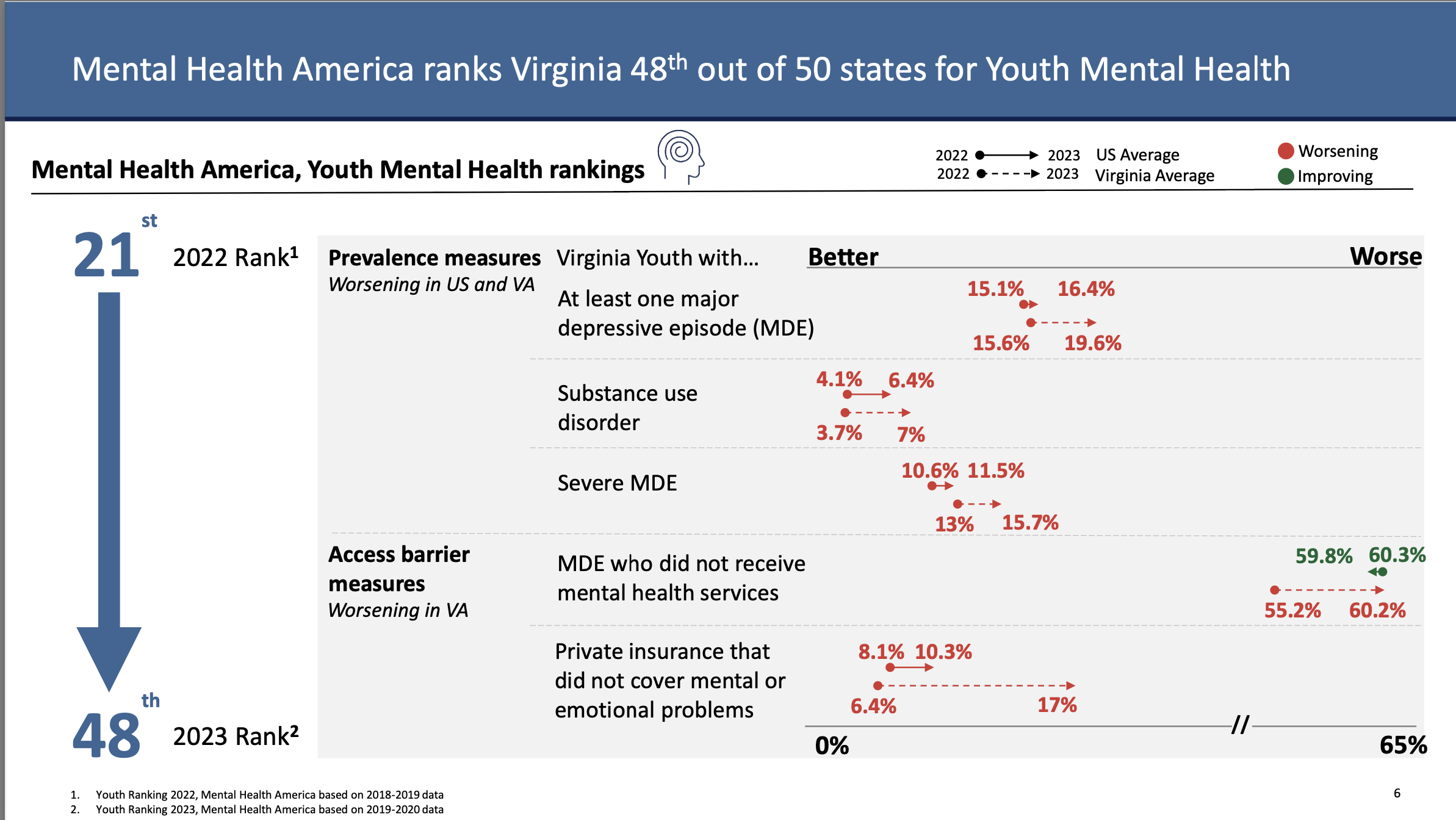 At which time, the disruption in the lives of children and adolescents by the extended school shutdowns drove up demand against the backdrop of that severely constrained supply.

I am sure that the administration will study whether more money than the Governor has asked for can be usefully spent.

But we can be glad there is political agreement on both the fact and the cause of the surge in demand and that both parties are in favor of addressing it.

The Governor wants among other initiatives to address the shortages of professionals in the dark areas shown in the opening figure.

That will be very hard to do with money alone. Those professionals set up their practices in high population regions for a multitude of reasons that are not driven exclusively by money, but also by the lifestyles they want.

That presents a very tough problem to solve when there is a severe shortage of mental health professionals nationwide and they can live wherever they wish.

Bottom line. The administration is working to address the mental health crisis with a transformative plan for behavioral health they developed and are passionate about.

They are rolling it out in phases because they need the building blocks in place for each phase, not necessarily because they considered funding a driver of its pace. Sometimes increased speed can cause chaos.

But if more money will move that forward, I am sure the Governor and Secretary Littel will consider it.

The General Assembly is poised to help. In a perfect world both sides can look for savings in what is funded for less important things to make up the difference.