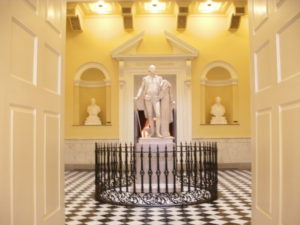 The coming Special Session of the General Assembly will be narrowly focused but filled with controversy, based on the legislative wish list just released by House of Delegates Democrats. Only two bills listed fall outside of the major categories of “COVID-19 Relief” or “Criminal Justice and Police Reform.”

Under the heading “COVID Relief,” the Democrats wish to reopen their drive for employee paid leave and. as predicted. want to designate COVID-19 as a workplace disease.

The Senate Democrats have their own list, released in June and reiterated in a more recent news release. The release claims that one of the bills is ready for public viewing, but provides no link and the bill mentioned is not yet available through Legislative Information Services. Neither caucus has yet revealed any thoughts on how to amend the state budget, a task where Governor Ralph Northam naturally takes the lead.

Here is the list from the House Democratic Caucus, with some thoughts following:

A Virginia-specific mandate for employee paid sick leave was a hard-fought issue during the 2020 session, in which a House-passed bill ultimately failed in the Senate. Since then, one of the first Congressional responses to COVID-19 created a federal mandate, but only for the period of the emergency. How this proposal meshes with that will be a key issue.

As predicted, Democrats will push for a presumption that if a first responder or teacher gets COVID-19, the disease was contracted at work and the workers compensation system will be responsible for medical care, lost wages, and perhaps even permanent disability or death benefits. That is the camel’s nose, of course, for full workers compensation coverage for all employees for COVID-19.

Added workers compensation coverage for teachers, police and fire are new bills for taxpayers to pay. If private employees are given the same coverage, then the employers face the higher premium costs, which get passed along in pricing. The real issue comes when somebody asks why COVID-19 is the only respiratory infection covered, when influenza can also disable or kill?

A bill that might prove popular with the business community provides some protection from lawsuits if the entity being sued has been following “health guidance.” Whether that means anything will depend on the actual bill. All of these are just bullet point summaries, not actual bills.

Missing from the House list of criminal justice issues is any proposal to end the felony punishment for simple assault on a police officer, which has been pushed by Senate Democrats. It is also not highlighted on the Senate list in their newest release. Perhaps the ardor for that fades as polling indicates most voters are feeling quite sympathetic with law enforcement these days.

Without doubt, a wide range of other issues were proposed, and it may be that Speaker Eileen Filler-Corn shot them down as outside the scope of issues she will allow for consideration. The parameters of the Special Session will be set by a resolution, also yet to be seen. How it will actually work with no face-to-face interactions remains a mystery.