“But, It’s Not a Perfect Bill. I Can’t Support That” 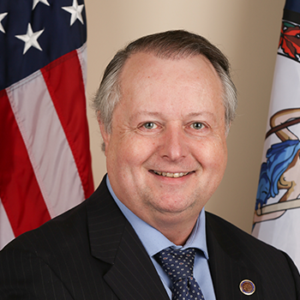 Once again, the General Assembly has killed legislation that would prohibit politicians from using campaign donations to cover personal expenses. It is easy to express outrage at this almost annual occurrence, but, in doing some background research on the subject, I encountered some details that, on the one hand, provide a fuller picture of this this struggle, but, on the other hand, make the opposition even more perplexing, if not hypocritical.

Upon the filing of a final report of campaign donations and expenses and disposing of surplus funds, the law prohibits “any person to convert any contributed moneys, securities, or like intangible personal property to his personal use or to the use of a member of the candidate’s immediate family.”  However, a “final report” needs to be filed only in any of the following circumstances: “when (i) a candidate no longer seeks election to the same office in a successive election, (ii) a candidate seeks election to a different office, or (iii) the candidate is deceased.”  Thus, as long as a member of the House or Senate continues to run for re-election for his seat, he can keep his campaign books open, filing only the required periodic reports.  There is no law that prohibits using donations for personal use during that time. Several years ago, the Associated Press reported on several instances in which legislators were clearly using campaign donations to pay for personal expenses. END_OF_DOCUMENT_TOKEN_TO_BE_REPLACED

Virginians have been assured forever by the hospital lobby that the non-profit regional monopolies established and protected by COPN nearly everywhere but Richmond:

Well. The median operating margin for Virginia’s 106 hospitals in 2020, the latest year for which data are available, was 9.2%. Nationally, that margin was 2.7%.

Virginians paid over $1.5 billion more for hospital visits than they would have if our hospitals had cumulatively posted a 3% operating margin, which has been at or near the national median  for years. END_OF_DOCUMENT_TOKEN_TO_BE_REPLACED

I can’t hear you.

Because we do, an out-of-state organization is by far the biggest donor to Virginia Commonwealth’s Attorneys races in elections of local prosecutors.

Justice and Public Safety PAC, based in Washington D.C., utterly dominates support to the campaigns of progressive district attorneys in Virginia.  That PAC receives most of its funding from billionaire George Soros and his Democracy PAC. END_OF_DOCUMENT_TOKEN_TO_BE_REPLACED

Money in politics matters for a lot of reasons. Most of them are unsupportive of a republican form of government.

The majority of the Virginia political class is addicted to unlimited campaign donations, a powerful incumbent protection mechanism. They do not blush when they contend that transparency is all that is required when they oppose funding limits.

They avoid the fact that massive donations are transactional.

Dominion Energy’s enormous giving to Virginia candidates over the years has been pretty evenly split between the parties. Let’s call it what it is, a balanced investment portfolio. The ROI has been spectacular.

The Virginia Public Access Project (VPAP), enabled by Virginia’s Campaign Finance Disclosure Act of 2006, is our primary resource for shedding light into the dark corners of the money flows.

This report singles out donations to candidates for the House of Delegates in the past two years. We can see where the money comes from and assess for ourselves what the donors may expect in return for their largesse. END_OF_DOCUMENT_TOKEN_TO_BE_REPLACED

An Unmistakeable Odor of Corruption 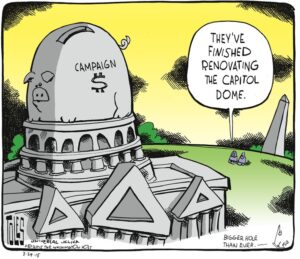 The data offered by the Virginia Public Access Project in Money in Politics have long left a perception that privileged access to Virginia elected officials is for sale.

Perception matches reality. It is for sale.

No one denies that:

Some may think that large donations are only given to kindred spirits, legislators who favor the causes of the donors.

I am sorry to inform them that many large contributors give to each of two opposing candidates to secure influence on the winner. Or they give to the winner immediately after the election if they supported her opponent during the campaign. Or both.

What could go wrong in a system like that?

Yet, as Dick Sizemore-Hall reported earlier today, legislators from both parties have just voted in the Virginia Senate Committee on Privileges and Elections to sustain it. END_OF_DOCUMENT_TOKEN_TO_BE_REPLACED

Hands Off My Donations!

This does not bode well for Petersen’s headliner campaign bill that would ban campaign contributions from public utilities (SB 45). The legislation is obviously aimed at Dominion Energy. Petersen has called on the Governor to support the bill. It will be instructive to see if (1) Youngkin comes out publicly in support of the bill and (2) if he does, whether that will be enough to sway enough senators, Democrats and Republicans, to vote for the bill. 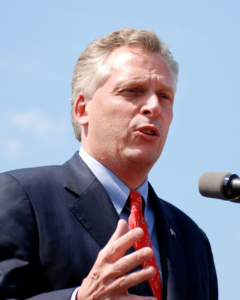 Terry McAuliffe demonstrated as governor that he will fight public charter schools.

He will oppose them regardless of the lifelong costs to the students of some truly pitiful Virginia public schools, many with majorities of minority students.

When governor, he vetoed a major attempt by the General Assembly to help those kids.

Indeed, not a single charter school has been approved by the Virginia Board of Education since the McAuliffe administration took office in 2014. Two, subject to reauthorization by hostile Boards, have closed.

He and his supporters in the unions and the ed schools consider the children be acceptable collateral damage to their policy preferences. END_OF_DOCUMENT_TOKEN_TO_BE_REPLACED