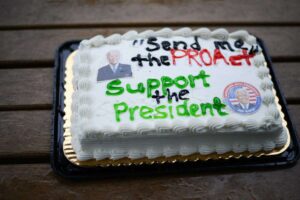 Washington Post photo of a cake delivered to Virginia Senator Mark Warner in May, encouraging support for the pending PRO Act. Elements of the PRO Act are also included in the BBB omnibus.

Virginia small businesses, job creators, and workers were wary of what the U.S. House passed in BBB, specifically some provisions mirroring parts of another disastrous piece of legislation called the Protecting the Right to Organize Act.

However, it was not just those who would be affected who need to worry. Virginia politicians may have also had worries of the electoral consequences of voting for these bills.

If you are a small mom and pop business with only a few employees but no labor attorney on retainer, you better get one if the Senate votes for the PRO Act or if the Biden Administration continues to push the provisions in future “must pass” legislation.

Employers could be fined $50,000 for what is known as “unfair labor practices” (UPL).  Repeated violation could cost the employer $100,000 each time. But these fines would not be limited to just the company. Build Back Better and the PRO Act say that officers and directors could be personally liable if a company makes a mistake.

These provisions strike at the heart of family businesses and threaten the network of job creators America must depend on for its economic recovery.

James Sherk, Director of the Center for American Freedom at the America First Policy Institute and a senior fellow with the Institute for the American Worker writes UPLs include actions  “that many non-lawyers could assume are unobjectionable. For example, an employer facing a union drive generally cannot ask workers how they feel about the union. Such ‘interrogation’ is a ULP… Neither may employers ask workers why they are dissatisfied and what they would like to see changed. ‘Soliciting grievances’ is also a ULP … So is giving workers an unannounced raise during an organizing drive.”

For Virginia’s politicians around the commonwealth and in Washington, D.C., the consequences for supporting these special interest provisions over workers and businesses could be dire.

November’s elections showed that voters do not reward politicians that support these policies.

Commentators have noted many reasons why Terry McAuliffe lost his bid for governor including labor stances such as siding with teacher unions over parents and also his opposition to right-to-work.

In August, Fox News reported that McAuliffe “got $500,000 from the Laborers’ International Union of North America (LIUNA). Fox News previously reported on the $2 million influential labor unions gave his campaign after he said he would sign a repeal of the state’s right-to-work policy.” After historically supporting right-to-work, McAuliffe flipped during his campaign for governor and said he would repeal the law if given the chance.

Virginia’s right-to-work law currently protects 89,000 unionized workers, saving them an average of $550 a year if they choose not to join a union. However, 3.1 million Virginians could be forced to pay a union if they were organized and if federal legislation such as the PRO Act kills right-to-work.

According to a recent poll in Virginia “70% of voters are concerned about the PRO Act abolishing state right-to-work protections, forcing workers to pay union dues or risk losing their jobs”

Groups protecting workers already smell blood in the water for politicians who side with special interests over workers and job creators. Americans for Prosperity, for example, is “launching a seven-figure ad blitz targeting vulnerable House Democrats who voted for the reconciliation bill (BBB)” according to Politico. This includes Virginia Congresswomen Rep. Abigail Spanberger and Rep. Elaine Luria.

While Reps. Spanberger and Luria have already voted for Build Back Better and the PRO Act, the Senate did not take up the bills and because of Manchin’s stance, BBB will not be taken up. This gives Sens. Mark Warner and Tim Kaine, who have not had to vote on either bill some relief. However, if either the PRO Act or its provisions do come up for a vote, they may want to take a lesson from Terry McAuliffe when deciding who to put first.