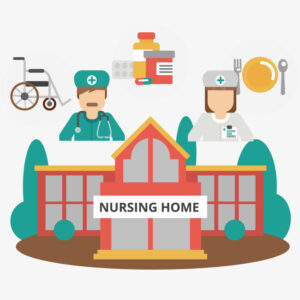 Seventy percent of those in Virginia are for profit. They are run not by doctors but registered nurses with physicians on call.

Nursing facilities very widely in size in Virginia, from the 300-bed Mulberry Creek Nursing and Rehab center in Martinsville to facilities of less than 30 beds, especially the long-term care units of a few mostly rural hospitals.

Insurer mix and staffing costs are keys to profitability.

Many of these businesses are worth what they get paid, but many are not.

Insurance. The vast majority of nursing homes depend on Medicaid and Medicare revenues. SNF services are far less expensive than recuperating in a hospital. So, all insurers want the transfer as soon as it is safe.

Medicaid pays for the majority of long-stay NF residents. It’s common for people to pay for nursing home care privately until they’re no longer able to afford it, which is when they can qualify for Medicaid.

One sure thing about Medicare and Medicaid, they demand unbelievable amounts of data. I will use those data to illustrate the issues.

Profitability. The average pre-COVID profit margin for most of these businesses in the U.S. was between 3% and 4%. Those margins in normal times vary widely depending on:

COVID effects on the business. Many nursing home businesses are foundering under COVID-related stresses  COVID has brought business pressures, but also federal dollars.

COVID has driven up nursing facility costs and driven down their occupancy rates.

The number of patients in Virginia nursing homes dropped by 13% in the 15 months from the end of 2019 through March 31 of this year. That represents a loss of 3,602 patients. Statewide nursing home occupancy rate dropped from 86% to 75% over that same period.

Yet even with the drop in patient populations that reduce staffing requirements, filling jobs with quality people remains a difficult problem across the system. Nursing homes face the same shortages of skilled and unskilled workers that all businesses must overcome.

The personnel problems for many have proven unmanageable, even if they want more workers. Some prominent chains are reported to have used understaffing as a business model well before COVID to drive higher margins.

The best find good people, but the worst are well known to professionals and quality staff simply don’t want to work there.

COVID Money. Nursing homes have gotten federal COVID money, but I can find no reliable data to trace that money to individual homes.

More money is on the way, but it is hard to tell how the financials will wash out in the near or long term. The process for actually delivering the money to those for whom it is intended through the federal and then state bureaucracies is broken.

It is more money than the government agencies can handle. Literally.

Once the money helicopter is grounded, the nursing homes will want higher Medicare and Medicaid reimbursements, and will probably need them to meet the new challenges and costs.

Counterintuitively, nationwide, for-profit nursing homes are more likely to be found in poor neighborhoods than are non-profit ones, thus have a larger share of Medicaid patients.

Marketing vs. reality. Unsurprisingly there are major differences between badly performing nursing home marketing and the facts seen in federal nursing home data.

Envoy of Williamsburg is in the government’s data the worst nursing home in Virginia. It is on the CMS “Special Focus Facility” watchlist, a rare designation, and has been cited for patient abuse.

Go to that facility’s web page and you will find that “Envoy of Williamsburg is a place to get better, a place for living.” Sort of.

Envoy of Williamsburg, bucking state trends, has actually increased its daily patient occupancy in the past two years. A success in marketing and sales at least.

Perhaps the Health Commissioner could have stopped the nursing home from taking in new patients until it fixed its problems. Didn’t happen.

Perhaps the Attorney General could have sued for violation of the Consumer Protection Act.

That didn’t happen either.

What’s next? Next, I will report on nursing homes in South Hampton Roads.  With some honorable exceptions, they may be the worst in the state.

I will continue the series until readers can view the data for all 286 statewide.

Then you can decide how badly we need regular inspections and assess the impact of the campaign money-driven refusal of successive state administrations  and General Assemblies to fund the inspectors.