A Virginia Department of Education press release issued yesterday contained a vitally important message: Virginia’s school accreditation standards are failing to do their job. Despite unprecedented learning losses during the COVID epidemic, the percentage of Virginia public schools meeting the standards fell from 92% pre-COVID to 89% post-COVID, a decline of only three percentage points.

“These ratings call into question the effectiveness of our accreditation standards in identifying schools where students are struggling to achieve grade-level proficiency,” stated Superintendent Jillian Balow. “Frankly, the ratings we are releasing today fail to capture the extent of the crisis facing our schools and students.”

And how did the legacy media treat this story?

The Washington Post ignored it. Instead, it published a story headlined, “Youngkin’s rules for trans students leave many teens fearful, despondent.” As far as I can tell from the round-up of clips in the VA News aggregator, not one of Virginia’s major metro dailies covered the announcement. The (Charlottesville) Daily Progress, the (Harrisonburg) Daily News Record, and WSLS (Roanoke) and WTOP (Washington) were the only legacy media outlets to mention it. Only the two TV stations included the Balow quotes in the body of their stories.

WTOP balanced Balow’s statement with a quote from former Secretary of Education Atif Qarni: “This Governor ran on a manufactured narrative that Virginia schools are failing, and since the new ratings don’t fit his narrative, he wants to manufacture an alternate realty.” Nothing wrong with getting the other side of the story. But instead of going into he said/she said mode, how about recounting the evidence that Balow presented in the press release to back her side of the story?

Under the accreditation system adopted by the state Board of Education in 2017 and implemented the following year, explains VDOE, schools are evaluated on quality indicators grouped in three categories: academic achievement, achievement gaps, and student engagement and outcomes. Performance on each indicator is rated at one of the following levels: 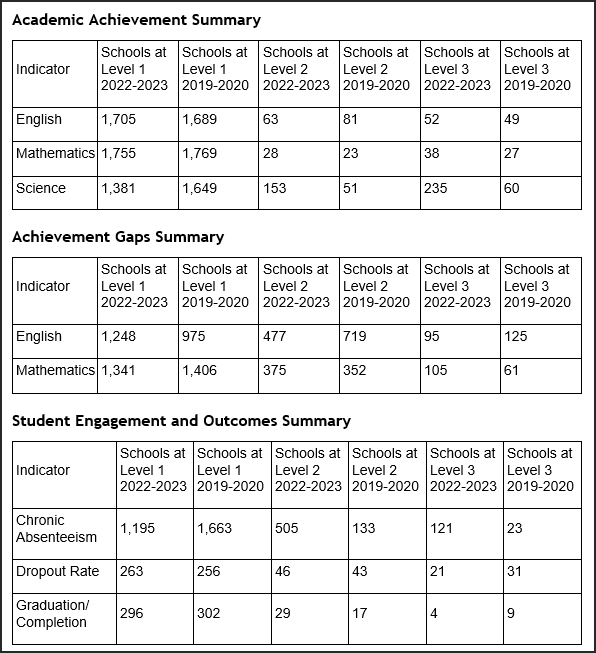 “The school quality indicator data and the overall school ratings are skewed by several factors that obscure the impact of the pandemic and school closures,” Balow said. “For example, in English, lower expectations on the reading tests introduced in 2020-2021 and how growth is factored into accreditation resulted in more schools achieving at Level 1 in English than before the pandemic. This masks the catastrophic learning losses experienced by our most vulnerable students.” (My italics.)

Most people don’t understand this: To maintain accreditation, it doesn’t matter how many students in a school fail the SOL tests as long as it can be shown that enough show “growth” in their understanding of a subject.

Prior to the pandemic, the number of students statewide who failed an SOL reading test but showed growth — and therefore counted toward their school’s accreditation rating — ranged from 19,000-20,000. With this latest round of accreditation calculations, the number has more than tripled to 61,000.

Similarly, the number of students who failed a math SOL test before the pandemic but showed growth and counted toward their school’s rating was about 20,000. This year the number has quadrupled to more than 88,000.

Balow didn’t say it, but I will: the student “growth” measure is a scandal. In many schools, it might even be outright fraud. The determination that a student has demonstrated growth is a highly subjective decision by the teacher, and it is subject to brow-beating by administrators who want to improve their numbers. Standards of Learning tests have elaborate processes to prevent cheating. There is nothing in place to prevent school administrators from fudging the student “growth” data.

The reality is that many students who are said to have shown “growth” have learned almost nothing.

Far from “manufacturing” a narrative, as Qarni claims, the Youngkin administration is shining a spotlight on Qarni’s massive malfeasance during the Northam administration.

If Team Youngkin has done anything wrong here, it has been to understate the depth and breadth of the problem and, perhaps in an effort to avoid sounding partisan, to hesitate calling the malfeasance in bald-faced terms what it really was: the greatest learning loss in modern Virginia history.

This entry was posted in Education (K-12), Media and tagged James A. Bacon, SOLs. Bookmark the permalink.