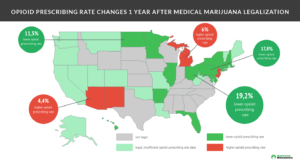 The lesser of two evils. The ongoing 2020 Virginia General Assembly session has generated a lot of debate over gun control. Proponents of stricter firearms regulation cite reduced gun violence as a goal. While gun-related deaths (including murder) are a real problem, those deaths are less frequent than fatal opioid overdoses. In 2017, there were 455 murders in Virginia versus 1,241 drug overdose deaths involving opioids. The number of fatal opioid overdoses in Virginia rose from about 500 in 2010 to over 1,200 in 2018 while the number of gun related deaths (of all types) rose from 868 to 1036 over the same period. While it’s fair to say that Virginia has taken many steps to deal with the opioid crisis there is one step that has not been taken: legalization of medical marijuana. Recent studies point to the fact that most states adopting legal medical marijuana see an immediate reduction in opioid prescriptions after medical marijuana is legally available.

The road to hell … is paved with good intentions. While illegal opioids like heroin have been used and abused in America for years the recent spike in opioid abuse has a legal genesis. In the early 1990s pharmaceutical companies held out a new generation of opioid medicines almost as a panacea for pain relief. It was said that these new medicines would relieve pain without becoming addictive. Based on these assurances, opioids were legally prescribed for a spectrum of relief from significant pain. Once used almost entirely to treat cancer-related pain, by 1999 86% of patients using opioids were using them for non-cancer pain. In some communities opioid prescriptions became the rule, rather than the exception, for pain relief. Two Virginia localities, Norton and Martinsville, topped the list for per capita opioid pain pill distribution from 2006 to 2012. Over those seven years Norton saw a distribution of 306 pills per person while Martinsville checked in at 242. The “average” resident of Norton was taking one pain pill every eight days for seven years. In reality, the distribution was skewed to a subset of the population which was taking pain pills at a much faster rate. People started to overdose. People started to die.

As the problems with opioid prescriptions became obvious the pills were made harder to legally obtain. This caused the second shoe to drop when it became obvious that opioids were, especially for some people, highly addictive. An illegal secondary market for legally prescribed pills started as opioids were transferred from those to whom they were prescribed to others. After that secondary market dried up, the opioid-addicted turned to heroin — an illegal opioid-based drug. Deaths due to heroin-related overdose increased by 286% from 2002 to 2013.

The latest chapter in this tragedy involves illegally manufactured fentanyl, a potent synthetic opioid that is 50 to 100 times stronger than morphine. Fentanyl is sometimes sold on the black market as fentanyl and sometime mixed with heroin or cocaine to increase potency. This mixing is very unscientific and can result in extremely potent doses. Deadly doses. Starting in about 2006, accidental fatal overdoses of illegal fentanyl spiked in the U.S.

Finally, some will say that medical marijuana has not gone through the rigorous approval process required by the FDA. Tell that to the families of the thousands of dead Virginians whose loved ones lost their lives in a fatal process that started by taking FDA-approved opioid pain killers. Once again: Nobody has ever died of a marijuana overdose.