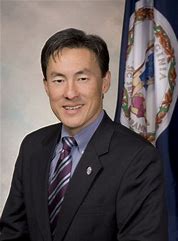 Delegate Mark Keam, D-Vienna. He voted against a bill eliminating SCC oversight on an $8 billion wind investment, then abstained to save the bill. Watch it here.

Dominion Energy Virginia’s massive $7.8 billion offshore wind project received a tepid 5-4 endorsement late Thursday night in a House subcommittee, after legislators were told it would add $13 per month to typical residential bills starting in 2027. In stark contrast to a similar hearing in the Senate Wednesday, both the State Corporation Commission and Office of the Attorney General staff spoke forcefully.

That 5-4 vote to report the bill came on a second try, as the first roll call was scrambled by legislators changing their votes before the chairman closed the roll. At times on the first roll call the proposal was failing by 6-3 or on a 5-5 tied vote, but that roll call was discarded. The final vote was 5-4, with Delegate Mark Keam, D-Vienna, abstaining. He had voted “nay” before but can be heard on the video tape saying he didn’t want his vote to kill it.

The basis for his abstention, normally used when a legislator has a conflict of interest, was not stated.

The bill in question is Chesapeake Democrat Del. Cliff Hayes’ House Bill 1664 but pay no attention to the introduced bill.  There was a substitute.  It was a dream bill for Dominion’s plans, once again dictating to the SCC that “all costs” of the project would be “deemed to be reasonably and prudently incurred.” Those are the magic words one opponent labeled “a blank check.”

The substitute went further in seeking creative ways to harvest votes, promising (the first time I’ve seen this) not to charge any of the capital costs of the project to “low income residential customers,” with some vague definition that referenced their dependence on various benefit programs. Dominion lobbyist William Murray told the subcommittee the idea was to find some way to set out those customers without “having to redetermine their eligibility.”

Excluding the hundreds of thousands of such Virginia households from paying for the project, of course, just bumps up that SCC estimate of $13 per month on everybody else. It is the very definition of cost shifting. The new language also forces any large industrial customers who don’t use Dominion to pay a share of these costs over the decades to come. The residential cost is only part of the story and not the only path to picking people’s pockets.

Unlike Wednesday, SCC utility division Director Kimberly Pate did not wait to be asked but went to the committee podium and volunteered to share her residential cost estimate. Her brief handout noted that if the project goes bust, or produces less electricity than promised, the cost to customers remains. Given the variability of wind output, the utility has proposed additional gas peaking plants to maintain reliability, an additional customer cost not in her estimate.

Senior Assistant Attorney General Meade Browder zeroed in on the “deemed to be reasonably and prudently incurred” phrase as removing important oversight authority at the SCC. Given the size and novelty of this proposal, the only utility-owned project in North America, the Attorney General considers that oversight important.

Browder noted that the capital cost of this one project was equal to the entire current capital rate base of the utility’s generation fleet, with a parting shot that offshore wind is two to three times as costly as other non-carbon alternatives, such as solar and onshore wind. He noted that his boss Attorney General Mark Herring does support offshore wind development, but not with this bill as written.

There were several party-line votes during the three-and-half hour energy subcommittee meeting (another post topic, perhaps), but on this one Del. Terry Kilgore, R-Scott County, supported the bill with four Democrats despite the emasculation of the SCC. He has been patron of similar bills in the past, and Dominion’s long-term capital plans also include a pumped storage facility in Southwest Virginia, far from Dominion’s territory but close to his home.

Before Pate dropped her bomb, the substitute bill had been endorsed by Governor Ralph Northam, through Secretary of Natural Resources Matt Stickler and others. A line of environmental activists stood in favor, but in a rare break one environmental group spoke against the bill because of how it guts consumer protections. (This morning we read the glowing economic development projections for the project are now being questioned by prominent Hampton Roads economist James Koch.)

Subcommittee members Keam and Alphonso Lopez, D-Arlington (watch his vote on the tape) challenged Browder and Pate with questions.

Keam wanted to know if the bill, as drafted, only allowed Dominion to develop the project off Virginia Beach or if other companies could also build in the designated area. He never got a clear answer to that, but here it is: Only Dominion gets the favorable treatment at the SCC dictated by this bill, as this is written, and another developer would not. That is the important point.

Lopez went after Pate for using Dominion’s own $7.8 billion capital estimate, 25-year pay back period, and the allowed 10.2% return on equity in her calculations.  Those add $6 billion more to the all in cost.  That was the question at hand: What will it cost customers if Dominion builds this project using the rules outlined in this bill? Without question, if a smaller project is built or the construction bill comes in lower, that lowers the cost to consumers. The construction bill could also be higher.

The only other media in the room was Virginia Mercury, and its reporter stayed later than I did, according to Twitter. Her story today ignores this dust-up and instead covers bills dealing with the Regional Greenhouse Gas Initiative. Her story on Wednesday’s similar Senate subcommittee meeting also ignored the offshore wind bill and focused on a failed bill to expand retail choice. It is all about what you choose to cover.