Why the Need to Slant Stonewall Jackson’s Legacy? 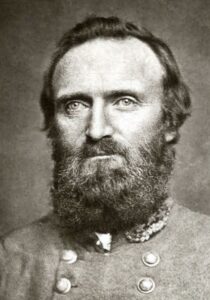 Thomas “Stonewall” Jackson’s mixed legacy — slaveholder, educator of slaves, rebel against the United States, and one of the greatest military commanders in U.S. history.

If you were asked to describe Stonewall Jackson in just a few words, what would you say? Apparently the Washington Post would say — an enslaver of six people.

Ian Shapira, a member of the Washington Post’s Metro section, is the paper’s most prolific writer on the ongoing controversy at VMI over allegations of systemic racism and controversies over Confederate symbols at the school. The Post’s biography of Shapira credits his work for having “prompted,” among other things, “the removal of the campus’ 108-year-old statue of Confederate statue Gen. Stonewall Jackson.”

Shapira has mentioned Jackson frequently. But, if you relied on his reporting to give you the information that you’d use to develop your perception of Jackson and his legacy, you’d end up with a shallow, one-sided view. What’s worse — and actually more troubling — your knowledge of the general would be missing some of the most important aspects of his life and legacy.

Shapira has used the phrase “an enslaver of six people” to describe Stonewall Jackson in his reporting in seven different articles, since September 9th of last year. (He also referred to Stonewall as an “enslaver” three times.)

The only one of Jackson’s major battles Shapira mentions is Chancellorsville –and only to point out that Jackson was shot by his own troops. He also points out Jackson’s less-than-stellar performance as a teacher.

Here are the things that the primary reporter on an important subject, working for a newspaper that is widely regarded as an institution in American journalism, left out of his coverage of Jackson and his legacy.

It is inexplicable that this information about Stonewall Jackson wasn’t covered in the Post’s reporting. Mr. Shapira is a Princeton graduate. It beggars belief that he, and his editors, didn’t know these basic things about Jackson and his legacy. Any credible biography of Jackson, like S.C. Gwynne’s Rebel Yell, would tell them. Is it possible the Post felt that, while the Virginia community reevaluated and reckoned with the legacy of Jackson over these past few tumultuous months, this information about him was irrelevant? That it had no place in the ongoing public discussion?

If the Washington Post was trying to inform its readership of all major aspects of Stonewall Jackson’s legacy so readers could make a reasoned, well-grounded determination of what that legacy should be — then these omissions make no sense.

If, however, the Post was trying to shape its readers’ impressions, and lead them to favor the side that wanted to see Jackson’s statue removed and all other signs of his legacy downgraded (or completely erased) at VMI, then the omissions do make sense. Mentioning the good points about Stonewall Jackson may have been inconvenient, in that respect.

I e-mailed the Washington Post last week, and asked to communicate with Mr. Shapira about his reporting on Stonewall Jackson, in relation to VMI.  The Post’s reply: “We do not have anything to share beyond what we’ve reported.” So, seeing that the Post has nothing more to say, it’s time to draw our own conclusions, based on the evidence we do have.

In my opinion, this explanation makes the most sense: the Washington Post approached the story of the Stonewall Jackson statue and Jackson’s legacy at VMI with the mindset of an activist, instead of a reporter. It appears likely, if not probable, that the Post’s goal was to influence specific changes and actions at VMI instead of objectively chronicling everything it learned and laying all the information out for the readers to decide.

It wouldn’t surprise me if many Virginians and DC-area residents who aren’t thrilled with Confederate symbolism look at those of us who defend Stonewall Jackson’s legacy and wonder what we’re thinking. They probably see Stonewall as just some Confederate general who was a bad teacher and owned slaves.  There’s a very good chance that those Virginians and D.C.-area residents know next to nothing about Jackson’s greatness as a general, his worldwide fame and his Sunday School for slaves. If they relied on the Post’s coverage, they probably wouldn’t know.

Those of us who defend Jackson’s legacy, on the other hand, look at Stonewall’s critics and wonder how they could ignore his greatness as a general and his Sunday School for slaves. To us, their reasoning can appear shallow, even petty. But, it’s possible that Jackson’s critics don’t know the full story of his legacy.  They most likely didn’t learn it in school, and the Washington Post’s coverage of the VMI controversy overlooked it — or deliberately chose not to print it.

It’s hard to take the Washington Post seriously now, as an objective, fair reporter on events in D.C .and Virginia. The folks at the Post must have known what they were doing. They must have known that anyone with a basic level of knowledge of Civil War or Virginia history would see the one-sidedness of their reporting. They must have known that, for longtime Virginia residents, especially those of us with ancestors who fought with Jackson in the Valley Army, that Stonewall’s legacy and theirs are intertwined. They certainly knew that many of us would think less of them for their slanted coverage of him. And yet, they did it anyway.

Congressman Dan Crenshaw, in a recent podcast with Jonah Goldberg, remarked that many of his colleagues seem more motivated to foster controversy and stir up passions, than to solve problems. It’s great for fundraising and media exposure, Crenshaw explained. Perhaps the Washington Post is thinking the same thing.

If so, it’s not only unfortunate, it’s poor citizenship on their part. Does the Washington Post want a Virginia united under a common, agreed-upon and respectful understanding of our shared past. Or does it want clicks and awards?

In an episode of M*A*S*H, Trapper John asked Henry Blake for a favor. Trapper told Henry that, if he refused, he and Hawkeye would tell everyone in camp that his brother was in jail  “My brother is a warden!” protested Henry. “We won’t say that part,” said Hawkeye.

Perhaps the Washington Post took its cue from Trapper and Hawkeye in its coverage of Stonewall Jackson’s legacy at VMI. It printed what it wanted to print. And, as for the other historical information, information that might cast a more favorable light on the general, it chose not to say those parts. If that’s what happened here, then that’s not journalism; that’s activism. That’s not reporting; that’s manipulation.

Donald Smith is a graduate of the University of Virginia who closely follows events at VMI.

This entry was posted in Culture wars, Media and tagged Donald Smith. Bookmark the permalink.