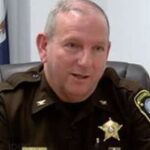 Southwest Virginia, long the most consistently “red” in its voting patterns, has become downright scarlet over the past year with the switch of three county sheriffs from the Democratic Party to the Republican Party.

The most recent of the three defectors, Sheriff Chip Shuler of Smyth County, filed a formal membership application two weeks ago with the Smyth County Republican Committee, reports The Center Square. He followed the lead of Buchanan County Sheriff John McClanahan and Tazewell County Sheriff Brian Hieatt, both of whom jumped from Dem to GOP last year.

“I am changing to the Republican Party because of the relentless attack on law enforcement by Democrats in Richmond and Washington,” said Shuler in a press release. “My deputies work hard to serve and protect the citizens of Smyth County.”

The big question: Do these defections signal widespread voter wariness of criminal justice reforms whipped by by the “defund the police” movement in Virginia’s major population centers, or are they unique to the peculiarly conservative small-town political culture of Southwest Virginia?

Clearly, the emphasis on law and order plays well in Southwest Virginia. Dismay over bills submitted by Democratic politicians in Richmond — banning no-knock warrants, limiting the offenses for which officers can stop people for driving, restricting the type of weapons and equipment police can use, establishing a process for partially defunding departments found to have engaged in ‘biased policing’ — is widespread.

West of the Blue Ridge, the widely publicized case of David Allen Simpkins has done little to restore faith in Democratic Party crime policy. Simpkins, released early by the state parole board despite prior 56 convictions, was arrested again for robbery last year. Since his release on parole, Simpkins racked up another 30 charges for alleged crimes up and down the Interstate 81 corridor.

Criminal justice reform in Virginia’s major metros is driven largely by the politics of race in the aftermath of the George Floyd killings. But the politics of race don’t loom large in Southwest Virginia. The 9th congressional district is 91% white. While 5% of the population is black, there are no large swaths of segregated schools and communities as there are in Northern Virginia, Richmond and Hampton Roads.

“As sheriff, it has been difficult to watch my deputies try to move forward during this unprecedented assault on our profession,” Sheriff Shuler said in a press release. “We remain an honorable profession and should not be judged by the bad acts of a few.”

Southwest Virginia has economic challenges and social pathologies aplenty. Corporate investment is low, unemployment rates are high, and economic opportunities are limited. Family structures are eroding. The opioid epidemic has shattered communities. Social disintegration is following a path similar to that of inner-city Black communities with a time lag of 20 or 30 years. The social preconditions of crime are omnipresent. But there is one big difference. When the vast majority of criminals are white, get-tough-on-crime measures can’t be portrayed as aimed at Blacks, as they are elsewhere in Virginia.

Southwest Virginians support tougher anti-crime measures and stronger law enforcement because they don’t like crime in their communities, end of story. It’s totally unconvincing to portray tough-on-crime sentiment as motivated by an animus against minorities.

After two decades of declining rates of violent crime in the U.S., shootings and murder rates have spiked in major U.S. cities over the past two or three years. Crime has re-emerged as a big electoral issue in cities like Chicago and New York. In Virginia Republican candidates are likely to push the theme that Democrats, overreacting to the George Floyd protests, have endangered public safety. Whether such charges resonate with urban and suburban voters, who are more ambivalent about the racial justice/public safety tradeoff than Southwest Virginians, is another matter.

We’ll get a better sense of things when we see the Crime in Virginia 2020 report, which is scheduled for publication next week. If the Democrats’ criminal-justice reforms coincided with a spike in violent crime last year, Democratic candidates could suffer at the polls. If Republicans’ fears of increased criminality prove unfounded, Democrats will feel vindicated.