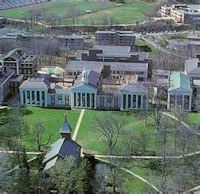 In a 22-to-6 decision, the Washington & Lee Board of Trustees voted today to keep the Lee in its name. There is no consensus in the W&L community regarding the name change, said the board in a statement. But the board explicitly repudiated racism, apologized for the university’s past veneration of the Confederacy and the “Lost Cause” narrative, and expressed regret for the fact that the university once owned slaves.

The statement also expressed the Board’s commitment to “free and critical inquiry, civil discourse, and developing students with honor and integrity.”

The private university has been sharply divided on policies relating to race. A movement to delete the last name of Robert E. Lee from the university was especially polarizing. Some members of the W&L community denounced the Confederate military commander as a slave holder and a traitor to the United States. Others defended retaining the name on the grounds that Lee was widely admired for his character, he played a critical role in reunifying the country after the Civil War, and he rescued the institution, named after George Washington, University from oblivion.

The naming controversy was part of a larger reappraisal of the university’s past as an institution enmeshed in Virginia’s history of slavery, Jim Crow, and segregation — a reappraisal that many believe has gone too far.

Controversy is sure to continue. The Lee Chapel will be renamed the University Chapel. Founder’s Day, traditionally held on Lee’s birthday, will be discontinued. Meanwhile the university will continue to expand board representation of “women and people of color,” form a Board committee on Diversity, Equity & Inclusion, and lead an examination of campus residential and social institutions to increase “accessibility, inclusivity, and choice for all students.”

The culture wars will shift to the nuts and bolts business of hiring deans and faculty, reshaping curricula, and forging a new campus culture. The controversy over Lee’s name was a highly visible one that all members of the VMI community could readily understand and agree or disagree with. Implementing diversity, equity & inclusion will entail hundreds of small decisions, many of which will occur outside the public eye.

The new battlefield will favor W&L’s administration, as conservative parent, students and alumni focus on other matters. But the balance of power has changed in one important regard. Alumni are paying attention now, and they have created an organization, the Generals Redoubt, with the institutional staying power to track proposed changes at the university, make them an issue, and mobilize opposition when necessary.

The culture war controversies are not going away.

The W&L Board of Trustees full statement

Response from The Generals Redoubt

This entry was posted in Culture wars, Education (higher ed) and tagged James A. Bacon, Washington & Lee. Bookmark the permalink.