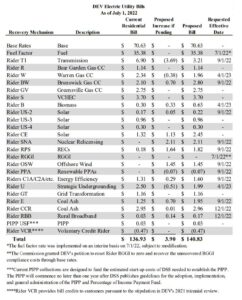 Residential customers of Dominion Energy Virginia will soon be paying 55% more for electricity than they were when the Virginia General Assembly took over micromanaging utility regulation in 2007. The Western Virginia customers of Appalachian Power will have seen their electric bills rise by 92%.  Underlying inflation for the period has been about 43%.

If that customer uses a steady 1,000 kilowatt hours per month, buying that from Dominion costs $600 more per year than it did in 2007 and buying it from Appalachian costs $736 more.

The figures come from an annual update by the State Corporation Commission staff, posted on its website Sept. 1. Since passage of the landmark 2007 legislation, the Commission has been directed to file updates on its implementation. Of course that original law has been changed so often that only shards of it remain, but the report continues.

It was the 2007 legislation that laid the groundwork for the proliferation of individual rate adjustment clauses or “RACs” you can see on that illustration of Dominion’s bill elements. Even that is not the full list as there are actually four different RACs for energy efficiency, which the staff consolidated. Most of those details do not appear on individual monthly bills, at least not for residential users.

It is impossible for the lay person to keep up with all the moving parts, and this consolidation by the staff is useful. Some of the charges go up and some down regularly, but the steady trend is clearly on the upside. 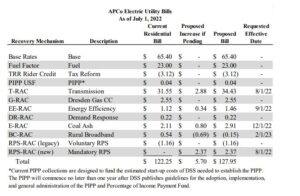 Residential bill elements for Appalachian Power customers in Virginia, as of July 1 and with pending increases. Source: SCC  Click for larger view.

RACs on the Dominion bill that we know are going to grow rapidly include the new charge for offshore wind (unless the company pulls the plug on the project because of the performance requirements), the coming Percentage of Income Payment Plan (PIPP) where all customers pay to subsidize bills for low income Virginians, and the continuing expansion of solar and battery storage projects.

The Dominion RAC for the carbon tax imposed by the Regional Greenhouse Gas Initiative was also slated to grow, but the company decided to withdraw its request for an increase when new Governor Glenn Youngkin (R) promised to rapidly withdraw the state from the RGGI compact. Then Dominion withdrew the separate charge entirely, asking to move the expense into its base rates. You are still paying this.

Much of this is directly tied to efforts by the General Assembly, with many (but not all) of the bills actually instigated by the utility. From the Virginia City coal plant to offshore wind to the coal ash removal programs and programs to bury residential distribution lines, these are expenses that before 2007 would have been subjected to the traditional reasonable-and-prudent standard for utility regulation. The SCC’s authority has been gutted.

At the very end of the report, the SCC gently reminds the legislature of a huge risk it has created. The legal morass that is the Virginia Clean Economy Act removed the SCC’s oversight on utility reliability. The law allows the utilities, and only the utilities, to ask for permission to keep a fossil-fuel generator online if closing it creates reliability risks. It writes:

The Commission appreciates the General Assembly’s awareness of the importance of reliability and security of electric service to end-use customers. That said, the above provisions leave it to the utility’s discretion whether to seek relief from VCEA requirements. The utility still has the ability to decide to retire and/or impair generating units even though customers may still be required to pay for such units. An after-the-fact review or finding of harm to reliability and/or security of electric service would leave the Commission with few options to protect customers.

If the General Assembly intends to leave this discretion solely in the hands of utilities, that is what the current law accomplishes. The General Assembly may wish to consider a required update or analysis from the Commission in close proximity and prior to unit closure.

Let’s translate the legalese: The day is quickly coming when it will be obvious to all that solar and wind power need reliable baseload backup, but we the official regulators have no authority to preserve that backup. Unless you restore that to us, legislators, the failure is on you.

Given that the legislature has been substituting its political decisions for the regulators’ independent and professional approach for fifteen years now, the warning may be ignored.

The report also touches on the financial condition of the utilities. Neither faces a full rate case again for a while. Last year, 2021, was the first year in Dominion’s three-year review period, and by its own reporting it earned about $150 million beyond what its allowed 9.35% return on equity would be. No need in reviewing again here how the legislature has acted to 1) protect Dominion’s excessive base rates from reduction; and 2) offer the utility numerous ways to avoid making refunds. Moving the RGGI tax into base rates furthers both goals.

Appalachian, on the other hand, is falling below its authorized return on equity. But recently the Virginia Supreme Court gave it a fresh chance to raise its base rates by overturning an SCC decision in the last review. The utility wanted to charge off the expense of coal plant retirements in one rate cycle, and the SCC ordered it to amortize the costs for several cycles. The Virginia Supreme Court looked at the anti-consumer Code of Virginia sections approved by our legislature and agreed with the utility.

Watch that 92% APCo increase over the past 15 years now convert into an actual doubling of the residential rate. Don’t complain to the utility. Don’t whine at the SCC which ruled for you. Call your local legislator and ask them if they voted for it (that 2018 bill had bipartisan support). The politicians want to be in charge, so they should explain.