When I Was “Canceled” at UVa 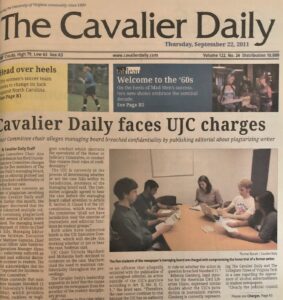 Cancel culture has been a hot topic in 2020. Most recently, it’s become a discussion point among those concerned about the state of academic freedom and intellectual diversity at my own alma mater, the University of Virginia.

The strongest critique of cancel culture at UVA emerged in October when alumnus Joel Gardner published an open letter to University President Jim Ryan imploring him to “strongly condemn the ‘cancel culture’ practice” and “focus on the real diversity that is important on college campuses–diversity of thought–rather than diversity of race, ethnicity and gender which has proven to be divisive.”

Reading Gardner’s letter and follow-up column for the James G. Martin Center for Academic Renewal, I was reminded of my own brush with cancel culture as a student newspaper editor at UVA almost a decade ago. Recalling that tumultuous time inspires within me the same concern that Gardner and others have expressed about the threat of intellectual intimidation within our campus communities.

Yet my experience also illustrates a problem with Gardner’s conclusion that “the main culprit behind these problems has been the purposeful politicization of our college communities” and his recommendation that UVA should “emphasize the traditions and values that have bound Wahoos together for decades — most especially honor and trust.”

Contra Gardner and others who consider the “woke mob” to be the primary driving force behind cancel culture on campus (1), my near cancellation as a student newspaper editor shows that traditionalists can pose an equal risk to intellectual freedom and diversity. In fact, “woke” ideology around racial and social justice might actually provide a useful intellectual counterbalance to the hegemony of traditionalist ideas that have governed large parts of campus life and American society for decades.

My close encounter with cancellation began early in the fall semester of my third year at UVA. While serving as the Executive Editor of The Cavalier Daily student newspaper, I faced a situation that every editor dreads: a staff member had committed repeated acts of plagiarism.

When we discovered the issue, my fellow editors and I were obliged to take three actions. First, we reported the plagiarism to the University’s Honor Committee. Second, we removed the writer from our staff and retracted the affected articles from our website. And third, we published an editorial informing our readers of the incident and our response.

The latter two steps were in accordance with journalistic best practices. The first step was required to uphold a commitment we had made to one of higher education’s most rigorous honor systems.

The UVA Honor System goes far beyond merely prohibiting lying, cheating, and stealing. Honor is a way of life at UVA. Upon entering the University, every first-year student gathers on the Lawn and signs a pledge stating they will comply with the standards of Honor throughout their four years. During our time at the University, students are regularly reminded that an Honor Code infraction is met with only one punishment: expulsion. And upon graduation, we are said to have worn “the honors of Honor.”

Most of the time, the Honor System works as it should. It inspires within some UVA students a strong sense of solidarity and pride. For others, it serves as a useful deterrent to behavior that might degrade the quality of our community and academic experience. But in some cases, Honor can devour its own — as happens with any system of norms that is so ironclad that a dissenting opinion or mere difference in interpretation might be deemed too dangerous to tolerate.

In my case, it was the latter that brought the wrath of the Honor System upon me and my fellow editors. Because we had included one line in our editorial acknowledging that we reported the plagiarism incident to the Honor Committee, the Committee chair filed charges against me and my fellow editors for allegedly being non-compliant with the Honor System’s confidentiality rules. The penalty for violating those rules was potentially as severe as the sanction for violating the Honor Code itself: expulsion.

However, there were two obvious reasons why the Honor Committee chair had erred in bringing these charges against us.

First, my fellow editors and I had taken care not to identify the plagiarist who would be a part of the Honor proceedings, meaning we were actually compliant with Honor’s goal of protecting student privacy.

And second, the student judiciary committee that would hear our case had specifically stated in its constitution that it lacked jurisdiction over journalistic groups including The Cavalier Daily. (2)

Although these facts were obvious enough that we could determine within days (and with the help of some excellent lawyers) that our defense was rock solid, the case dragged on for more than a month before all of the charges were finally dropped. It led to many sleepless nights spent researching the history of Honor and student media while drafting petitions to dismiss our case. It created more than a few awkward encounters with University administrators attempting to broach a compromise that would resolve our case. It generated local and national press attention. And it became the defining experience of my third year at UVA.

But more importantly, it showed me how easily facts and rights can be swept aside in the pursuit of upholding such a powerful set of traditions, customs, and historical values. Throughout our entire ordeal, we were instructed to refrain from discussing our case with anyone except our University-appointed counselor. Initially, it was not even clear whether we could seek advice from family members or outside legal counsel. When we pointed out the student judiciary committee’s lack of jurisdiction and our compliance with the goal of protecting student privacy, our arguments were ignored. And while this played out, we were threatened with additional litigation when our staff chose to report on this inherently newsworthy case.

Our story is hardly unique, as UVA’s Honor Committee has faced many controversies surrounding its approach to student rights and the proportionality of its punishments. Yet I believe our case in particular highlights a difficult truth that must be acknowledged in the discussion around cancel culture:

There has always been a limit to the type of viewpoints and perspectives that are welcome in American society and higher education, and historically these limits have protected traditionalists. (3)

As my experience shows, merely voicing in one sentence of one editorial a different interpretation of the customs and values surrounding the UVA Honor System nearly led to my expulsion.

There are several reasons why I consider my experience with the UVA Honor System to be a textbook example of cancel culture’s traditionalist roots and the risk they pose to the free exchange of ideas.

First, this was the only concrete threat I ever faced to my status as a student during my four years at UVA. I never faced a comparable risk from expressing contrarian opinions in the classroom and the pages of the newspaper that challenged progressive rather than traditionalist ideas. (4)

Second, the threat that I faced from Honor as a relatively prominent and protected member of the UVA community paled in comparison to the graver risks that a less privileged student would have faced in a similar situation. Imagine the self-censorship and conformity that would be required of an undocumented student or Pell Grant recipient who was unfairly accused of violating the Honor Code — they might not have had the luxury of conferring with pro bono lawyers or publicizing their own situation in defiance of guidelines from University administrators.

And third, my encounter with Honor only hints at the type of dissenting opinions and ideas that have likely been muffled by powerful systems that protect tradition and custom. In the specific scenario I described, my fellow editors and I didn’t even express a controversial opinion or criticism of the Honor System — we merely happened to interpret the System’s values slightly differently from the person in charge of the Honor Committee. Far more progressive reinterpretations of traditional customs and values have likely been suppressed throughout American history because they directly challenge established power structures that control so much of our lives.

The point of my story is not to minimize the threat of excess from those on the Left who would seek to delegitimize any pushback against emerging ideas such as police abolition or critical race theory. To be clear, we can and must have rigorous debates about the usefulness of these ideas and the tactics with which certain elements of the Left are pursuing them.

But we should not look solely to our traditions, customs, and historical values for examples of how that debate should be conducted. Instead, we must take the better elements of higher education — an emphasis on critical thinking, logical reasoning, and clear communication — and combine them with an enlightened sense of fairness, justice, and equity to facilitate the free exchange of ideas that will be necessary to solve challenges on and off campus in the years and decades ahead.

Thank you to Jason Ally and Andrew Seidman for reviewing this post.

Matthew Cameron, a member of the UVa Class of 2013, lives in Evanston, Ill. He serves as president of the Cavalier Daily Alumni Association, but his views are his own. This column was published originally on his personal Substack newsletter.

This entry was posted in Culture wars, Media and tagged Guest contributors. Bookmark the permalink.