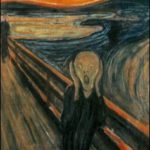 Including other types of mental illness, the Community Foundation estimates that, all told, 750,000 Northern Virginia adults, or 39% of the adult population, have mental health needs. An estimated 370,000 want therapy or counseling but the region’s 5,100 mental health professionals can’t come close to meeting the demand. And they charge so much — around $215 per 45-minute session for self-pay — that many people can’t afford them anyway.

Let those numbers sink in. Northern Virginia is one of the most affluent metropolitan regions in the country, yet nearly two out of five residents suffer from mental illness. Anxiety and depression are endemic. There’s a lot to unpack here. 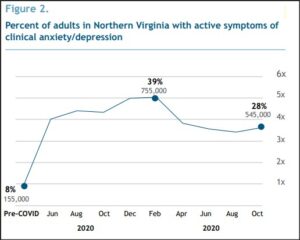 The Community Foundation report, “Finding Our Way Back to Mental Health: the need for affordable treatment in the midst of collective trauma,” makes no effort to analyze why mental illness is so prevalent. The report focuses mainly on how accessible help is, how much it costs, and what the community needs to do about it.

When two out of five adults are suffering from mental illness of one sort or another, something is seriously wrong. The Spanish Flu of 1918 to 1920 was far deadlier on a per capita basis than COVID-19, but none of the historical reports of the time indicated that American society experienced a collective nervous breakdown. People were more inured to hardship and misfortune. They were also more stoic. They cultivated the virtues of resilience and self-reliance.

My thoughts on this matter are influenced by a book I’ve almost finished reading, The Coddling of the American Mind, by Greg Lukianoff and Jonathan Haidt. The authors start off asking what’s going on at college campuses — why are there so many snowflakes? (They don’t use that term, which is derogatory, but the crybully phenomenon is what they’re examining.) They trace the origins in large part to changes in American culture, especially what they refer to as “safetyism,” or the fixation on reducing not only physical harm but harm to feelings. Parents don’t want their children to feel bad. They have abandoned the traditional wisdom that moderate levels of adversity build character. As a consequence, children are slower to mature than ever in U.S. history, and they are more emotionally fragile. (College administrators reinforce this fragility, the authors argue, but that is tangential to my main argument here.)

The U.S. reaction to the COVID-19 epidemic was safetyism in action. (This is me speaking now, not Lukianoff and Haidt, who published the book before the epidemic began.) Public policy was geared to reducing the identifiable, measurable risk of COVID-19 without regard to unintended and hard-to-measure consequences, such as the negative impact of social isolation upon mental health. The Community Foundation of Northern Virginia report shows how extensive that impact was. Anxiety and depression soared to unprecedented levels. We can debate how much mental illness resulted from the social isolation and how much arose from media- and government-generated COVID hysteria, but clearly the impact was massive.

The Community Foundation report says that cultural and socio-economic factors influenced the spike in mental illness. The rate of mental disorder for Blacks and Whites is roughly the same, about 30% of the adult population. It is higher for Hispanics (37%) and lower for Asians (24%). Loss of income and “difficulty in paying expenses” was a significant contributor to anxiety and depression. If Hispanics worked disproportionately in occupations shut down by COVID restrictions, it is not surprising that they would experience more anxiety. As for Asians, they are lower on just about every measure of social dysfunction imaginable, not just mental illness. I would conjecture that Asians have stronger family networks and inculcate the value of emotional resilience rather than emotional fragility.

Fortunately, the rate of mental illness was subsiding in October when the figures were compiled, and we can hope that they are lower-still today, a half year later,  as COVID transmission and hospitalizations are in steep decline. But anxiety, depression and mental illness pre-dated COVID-19, and they will be around when COVID is but an unpleasant memory. The Community Foundation response is to increase the number of psychiatrists, therapists and counselors.  I’m not persuaded that’s the answer.

Much counseling is ineffective and a waste of resources. Greg Lukianoff is a believer that Cognitive Behavioral Therapy can increase positive outcomes, and I know people who have had a positive experience with CBT. Instead of hiring more therapists, I’d like to see more focus on the kinds of treatment that are shown to work. In the meantime, I’d suggest we need a revolution in popular culture: resurrect the concept of building character, and making young people more resilient and less fragile.

This entry was posted in Mental illness and substance abuse, Public safety & health and tagged COVID-19, James A. Bacon. Bookmark the permalink.