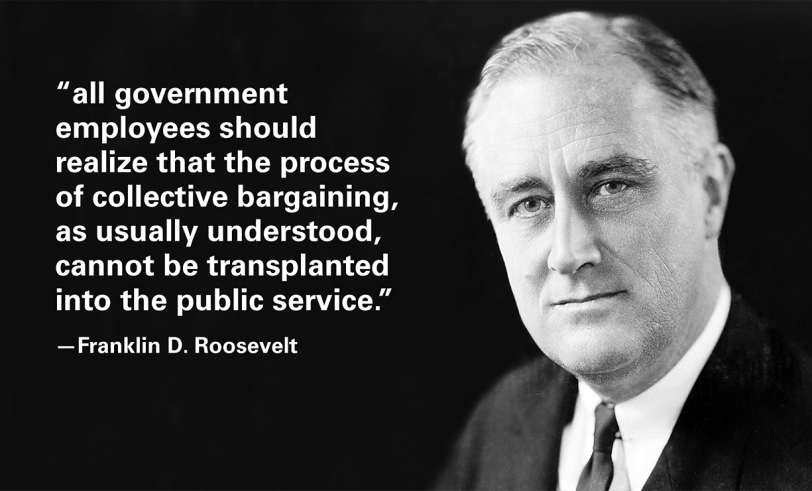 The gulf between what the City of Richmond School Board (RSB) and the Richmond City Council (RCC) on what will be negotiated with their public unions is actually an ocean.

The RSB has authorized the negotiation of virtually everything about how the schools are run. It leaves nothing off the table except the right to strike and the right to negotiate a closed shop (Virginia is still a right to work state), both of which state law still prohibits. But the unions can negotiate what are essentially the work rules of a closed shop.

In contrast, the City Council is poised to pass an ordinance on May 5th from two candidate drafts, one from Mayor Stoney and the other from three Council members. The Mayor’s version states what will be negotiated — pay and benefits. The other states what will not be negotiated with an eleven-point description of the City’s Rights and Authorities.

The City Council drafts, especially the Mayor’s, have it right. They note the City Council’s duties under the laws of Virginia and to the citizens of their city.

Not so the school board. The RSB resolution acknowledges only one stakeholder: its unions.

Unmentioned in the RSB resolution is exactly who is going to represent the city in its negotiations with its unions. Ideally it will be a team composed of City Council (finance) and School Board subject-matter experts. If so the city reps will be operating under two sets of negotiating rules in direct opposition to one another.

I’d buy a ticket, but maybe under the sunshine laws negotiations will be on TV.

I wrote yesterday that the City of Richmond Public Schools (RPS) passed a resolution in December of 2021 that authorizes negotiating control of school policies with its unions.

They include, and I quote:

To see what such a contract looks like, see the 50-page agreement between the Chicago Board of Education and its union, Unite Here, signed in 2017. There is nothing I can quickly find in that agreement that is not on the table in Richmond.

Union representatives to the first negotiations in Richmond will bring a real contract like Chicago’s or an even stronger pro-union document and throw it on the table as their opening demands. If they hired me to represent them, I know I would do that. It would be malpractice to do otherwise.

School board control over those matters is gone unless a lawsuit successfully challenges the right of any school board to negotiate away its responsibilities under the Virginia Constitution and Code of Virginia § 22.1-79.

It is hard to imagine how much fun it will be to be a principal if the teachers set “building level” shop rules like the ones clearly anticipated there. She will spend a lot of her time in formal union grievance conferences. By agreement Unite Here’s union shop stewards are employees of the Chicago BOE. Will one of the AP’s in each Richmond school be a shop steward?

I find nothing in the Virginia statute that authorized collective bargaining with local government unions which authorizes negotiation of the statutory powers and duties of school boards.

It appears to this non-lawyer that neither ordinance pending for May 2 vote in the RCC will necessarily cause the RSB to revisit its epic mistake.

That is because while it must ask the RCC to fund any contract provisions that cost money, the RSB does not need RCC permission to negotiate policies.

So, I hope a lawsuit successfully challenges the RSB resolution.

If not, Richmond parents and other taxpayers, welcome to Chicago Public Schools.