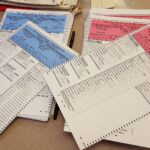 The Virginia State Conference of the NAACP has demanded that Attorney General Jason Miyares immediately replace his recently created Election Integrity Unit with a group to combat voter suppression and increase voter registration.

Many studies have shown that “voter fraud” is virtually nonexistent in the Commonwealth of Virginia and the Washington Post conducted a study that determined that only 31 out of 1 billion votes cast in the United States between 2000 and 2014 were alleged to be potentially fraudulent. The Attorney General should focus on ensuring all eligible Virginians have the right to vote and that all eligible Virginians can vote without threat of intimidation.

It may be true to say that voter fraud rarely rises to the level of changing election outcomes. However, the idea that there were only 31 fraudulent votes out of 1 billion cast is patently absurd. In an article debunking claims of widespread voter fraud, the Associated Press in December 2021 found 475 potential voter fraud cases out of 25 million votes cast. As of May 2020, the Heritage Foundation election fraud database cited 1,285 proven cases in the previous four years.

I’d like to turn the question around. How many cases of voter suppression and/or intimidation in Virginia can the NAACP cite?

Perhaps the NAACP can claim that certain laws encourage lower turnout — off-year elections for state offices in Virginia consistently have lower vote totals — but how many instances of voter suppression in violation of state law can it point to? Remember, the AG’s role is not to write the law but to enforce it.

Here are the numbers of Virginia votes for the past six presidential elections: 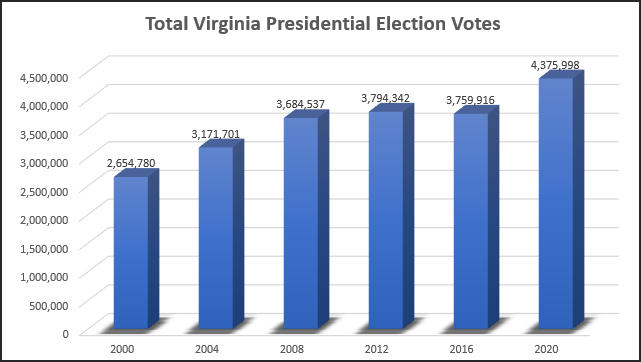 Vote totals increased 65% over 20 years. The state’s population increased only 22% over the same period.

As for the NAACP’s use of the word “intimidation,” I’d like to see the organization document a single incident in the past 20 years of a minority voter in Virginia being intimidated into not voting. If such an incident occurred, the NAACP would have trumpeted it for all Virginia to hear, and the media would have cranked up the amplifier for all the world to hear.

The fact is, Americans are concerned more than ever about election integrity. We live in a hyper-polarized society in which both political parties are utterly convinced that the other engages in systematic cheating. Fortunately, such toxic distrust is not yet pervasive in Virginia. The Miyares initiative seems a small price to pay to keep it that way.