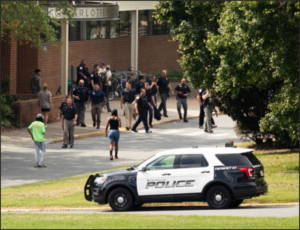 In the latest sign of spreading social disorder, Virginia underwent a plague of school hoaxes yesterday. According to media reports, incidents included:

There’s nothing new about shooting and bomb hoaxes. What is new is the epidemic-like frequency with which they are occurring. Apparently, the practice of reporting violent incidents in school buildings has reached such a critical mass that it now has a name — swatting.

The callers are idiots — they’re easy to track down and bring to account. But it would be interesting to know why they do what they’re doing.

Are there recurring motives or patterns in behavior? Is social media creating a contagion effect?

The hoaxes are highly disruptive. The callers should be punished with the full force of the law. It is important to send the message that actions have consequences.

This entry was posted in Crime , corrections and law enforcement, Discipline and disorder, Education (K-12) and tagged James A. Bacon, Social breakdown. Bookmark the permalink.