Political Damage to Primary Instruments of Improvement in Virginia Schools

We need all the help we can get assessing Virginia schools and producing actionable information to make them better.

The Standards of Learning exams show the results of poor learning, but do not identify actionable causes.

Directed to choose an additional measure of school quality by the federal ESSA (Every Student Succeeds Act) in 2015, Virginia, like most states, chose to use a school climate survey.

Virginia chose a hell of a good one developed in Virginia by University of Virginia scientists for the federal government. It was used here very successfully for several years.

Then Virginia Department of Education (VDOE) functionaries dumped it in 2020 for what were clearly political/philosophical reasons.

I have not seen any evidence that the new survey has been proven valid or reliable, even if one agrees with their woke philosophy. Frankly it could not have been validated in such a short span of time in the middle of COVID.

The new leadership at VDOE needs to return to the original.

It has proven to be an instrument of improvement for those that have acted on its results. There are dozens of studies supporting its validity, the U.S. Dept of Education placed it on its list of approved surveys, and researchers around the world have adopted it.

The results of that survey in 2019 at Walker-Grant Middle School in Fredericksburg were predictive of dreadful chronic absenteeism in that school in 2020-21, and massive learning losses in 2021-22.

Then Virginia stopped using it.

An opportunity to change Authoritative School was provided when VDOE and DCJS in 2020 combined their two existing survey efforts into a single survey instrument and administration cycle.

Richmond bureaucrats scrapped the scientifically developed and validated Authoritative School for a new, untested one they “developed” in the middle of COVID in 2020. They have administered it since 2021.

It is woke, but it also appears useless for the purpose. 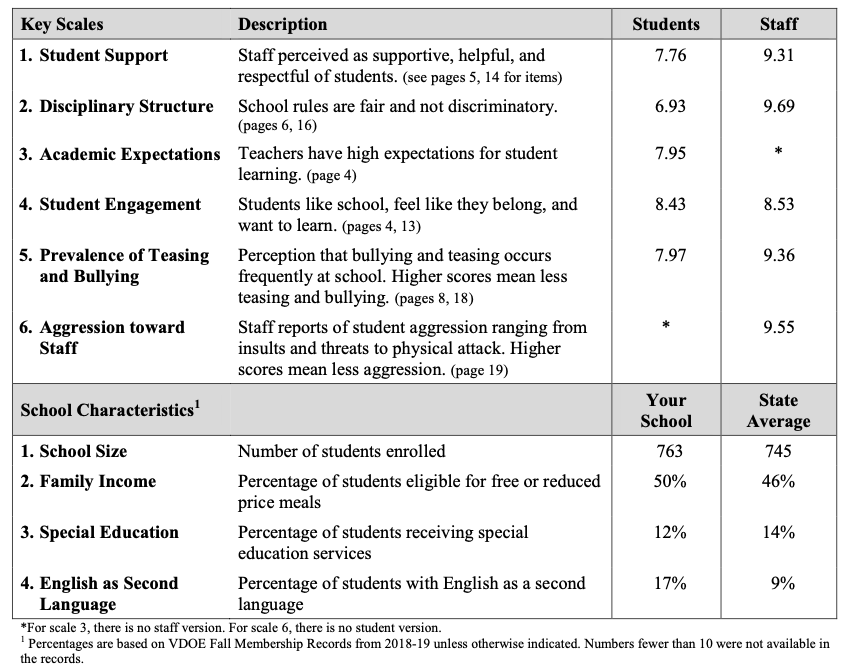 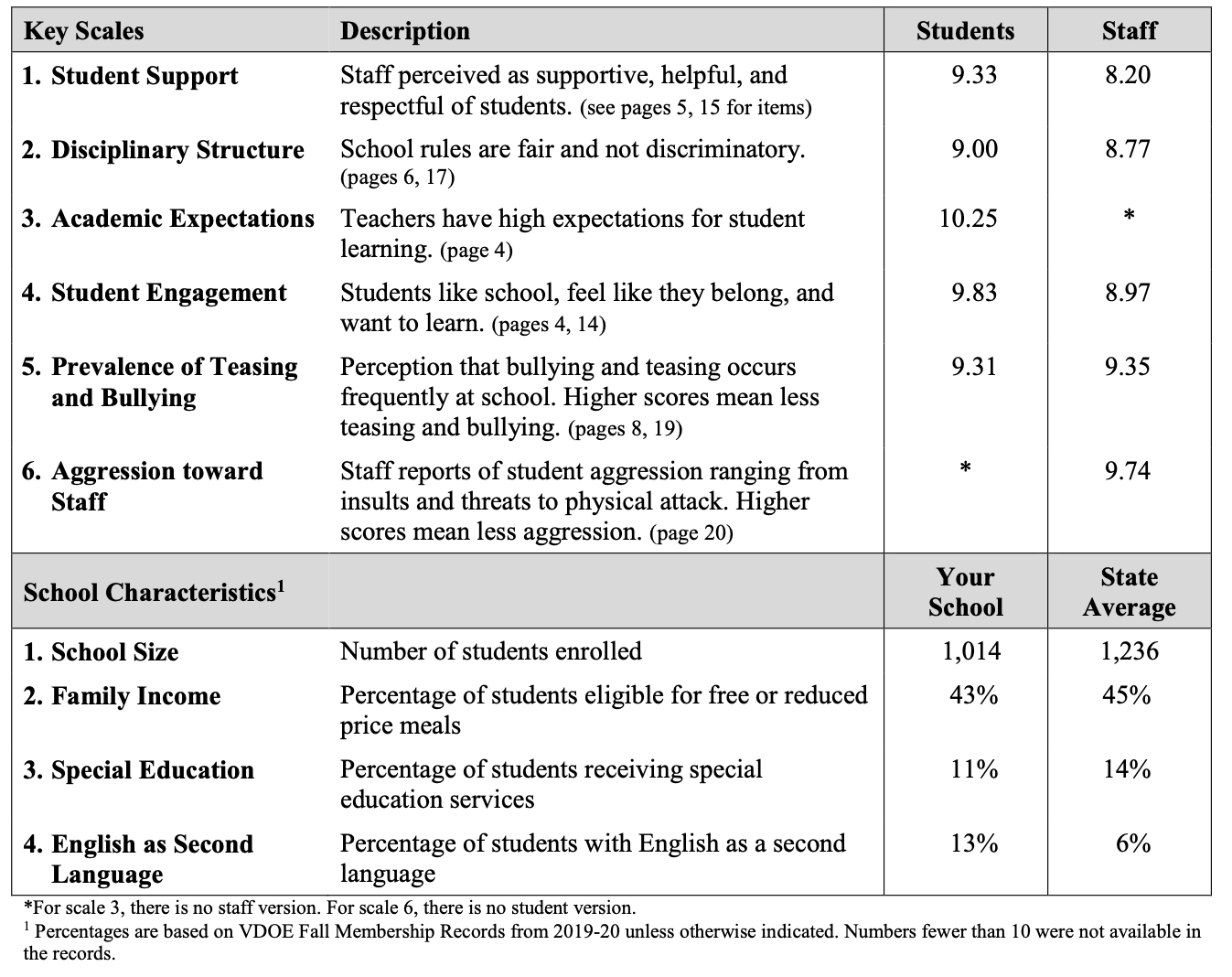 The key scales presented in the reports in Authoritative School are scaled scores designed to make them easier to interpret. For each scale, raw scores for student and staff participants within a school were averaged to create school means for students and for staff. The school means across the state were transformed so that the state average is 10 and the standard deviation is 1. 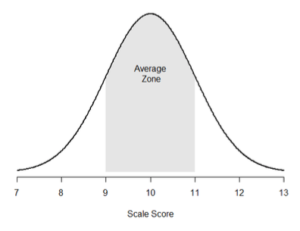 The staff-awarded scores in Walker-Grant Middle averaged 9.28.  At James Monroe 9.0. Both were in the lower quarter of the average zone, but they were in it. So, the staffs were relatively sanguine about their schools. Only those at James Monroe were proven relatively correct.

The huge disconnect between the staff and the students’ opinions of school climate at Walker-Grant was a big deal. The staff was clueless about how the students felt.

And the students were proven prescient in their assessments.

Operational results during and after COVID – same schools

So let’s see if the survey results predicted operational results:

Chronic absenteeism in the 2020-21 school year. The entire division turned in terrible results, but James Monroe was by far the best.

So, there can be no question what happened here.

Walker-Grant Authoritative School results showed that the middle school was in trouble before COVID hit, and that such a weak and chaotic school climate could not sustain the stress of COVID.

The Walker-Grant students nailed the problems there in the 2019 school climate survey. The staff at that school missed them.

The Authoritative School surveys used from 2013 to 2020 had been painstakingly and iteratively developed and extensively assessed as both reliable and valid. And they worked.

The surveys at both Walker-Grant and James Monroe were predictive. They provided actionable information for Fredericksburg schools.

The politics of school climate surveys.

Authoritative School  found a place on the list of climate surveys validated by the U.S. Department of Education.

We have the ability to use those surveys to make informed decisions on which schools need improvement and in what areas, not just from test scores but from excellent school climate assessments.

The Richmond coup. School climate surveys are high-stakes measurements. Careers rise and fall based upon the outcomes. Strengths and weaknesses are exposed. In the best schools and divisions, the information they provide is used to improve the learning climate.

So, the results had better be valid and reliable.

The team that met in Richmond to redefine the climate survey, either from home or masked at work, had no chance during COVID to design and test a survey that measured school climate. So, they just started using it.

They appear clearly to have tried to make the new survey more reflective of progressive values.

The Virginia School Survey questions document eliminated everything from Authoritative School that did not square with their sensitivities. And they added their own questions (items).

The bureaucrats were perhaps carrying water for the administration. And maybe a little of their own. But whatever they were trying to accomplish, they did not do it right.

Let’s examine some of the carnage:

The school rules are fair.

This school consistently has high expectations for student behavior with strict and fair discipline.

You get the point. VDOE and the Department of Criminal Justice Services (DCJS) took away an established tool in the middle of a crisis, showing at a minimum poor judgment and misplaced priorities.

Changing a reliable and valid survey in the middle of the COVID storm means that the schools are deprived of an instrument they could have used to measure the strengths and weaknesses of their schools and know what was needed to improve.

It is more than just unfortunate that we cannot compare the pre-COVID school climate survey results with the new ones administered starting in 2021. But we can’t. Apples and oranges.

The surveys are entirely different. But, also unfortunately, the results can be accessed on the same government web page as if they were coherent.

Like telling Mrs. Lincoln that her husband would be delayed returning from the theater.

Maybe the new leadership of DCJS and VDOE will consider returning to the valid and reliable survey that the feds paid UVa scientists to develop and test — in Virginia.

The one that worked in Fredericksburg.