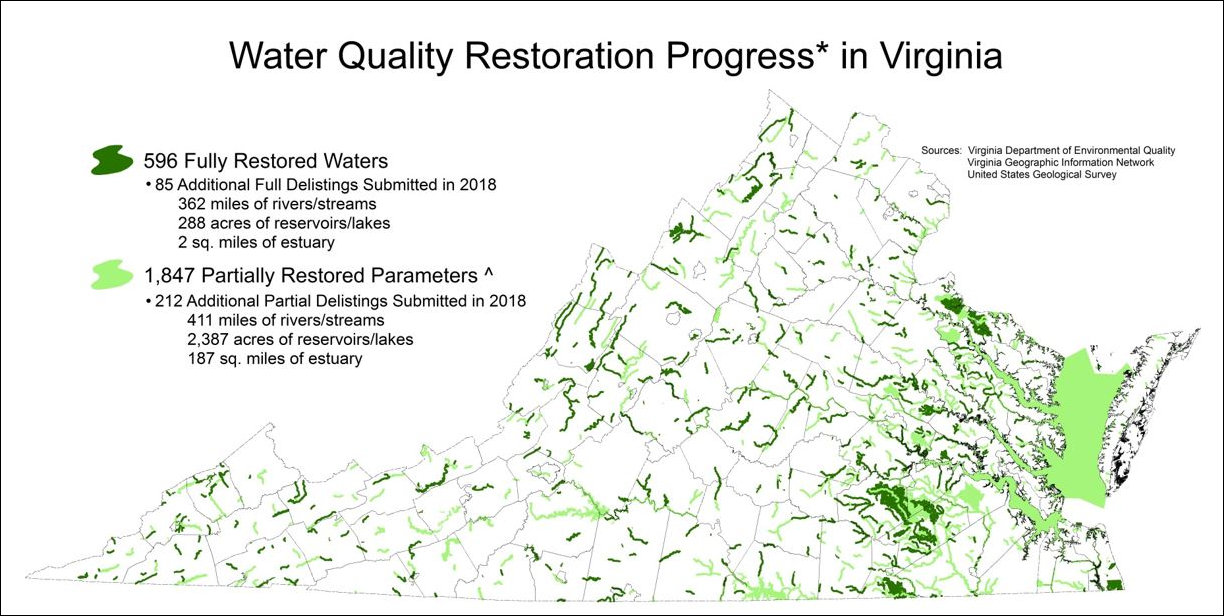 The Department of Environmental Quality has published its draft 2018 Water Quality Assessment Report rating the conditions of Virginia rivers, streams and other waterways. You can read read impenetrable prose of the executive summary here, which is like hacking your way through the dense jungle of a ’30s-vintage Tarzan movie, or you can read Tamara Dietrich’s distillation in the Daily Press. Dietrich’s summary:

Virginia’s waters are by no means pristine, but they’re mostly holding their own or even improving a bit in water quality, despite an influx of 1.6 million people over the last 20 years. … Over the last six years, water clarity in particular shows “significant improvement” overall, the report states, particularly in the Chesapeake Bay. Underwater grasses are surging, hitting 55 percent of the statewide goal, up from 47 percent just two years ago. And several segments of the bay and its tributaries — the James and Elizabeth rivers, for instance — once listed as impaired are showing improvement, particularly in low-oxygen dead zones.

Bacon’s bottom line: One of the more useful aspects of the report is that it shows that impairments to Virginia’s waters are many and varied. Certain issues — such as coal ash disposal — hog the media spotlight, generate public hysteria, seize the attention of lawmakers, and grab disproportionate public funding, while other issues go neglected.

Thus, Dominion Energy electricity rate payers will cough up between $3 billion and $5 billion to dispose of coal in lined landfills to guard against the risk that heavy metals, which can be toxic at high levels, might leak out. An obvious question: For a societal investment of billions of dollars, what other risks to Virginia waterways could be mitigated?

There has been no effort — absolutely none — to weigh the magnitude of risks, benefits and societal return on investment of coal ash disposal compared to alternative water-quality initiatives. He who generates the biggest headlines wins.