When you ask a question you have to be prepared for the answer.

McKinsey Global Institute, in collaboration with McKinsey Sustainability and the Global Energy & Materials and Advanced Industries practices released in January a massive study of the costs to get the planet to net zero emissions by 2050.

The study is “The Net Zero Transition – What it would cost, what it could bring.”

McKinsey’s short answer to the question of cost is $275 trillion globally between now and 2050; $275 trillion is $9.2 trillion per year on average if the entire world participates.

It won’t. Some nations will not or cannot. At what point do we expect China and Russia to pay their share? Or impoverished nations?

McKinsey noted that the increase in costs over previous assessments is $3.5 trillion annually. The increase is “approximately equivalent, in 2020, to half of global corporate profits, one-quarter of total tax revenue, and 7 percent of household spending.” 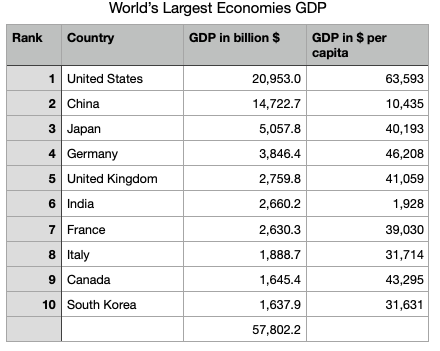 So $275 trillion represents five years worth of the entire GDP of the world’s ten largest economies. Such a bill will never be paid. Especially as the way forward is not agreed upon by major portions of the people of the world. Polarization has been driven by the tactics of the greens, not their goals.

Environmentalists, including those in Virginia, need to reexamine their tactics.

They could most usefully focus their money on helping power and energy companies and startups achieve technical breakthroughs that will massively lower those projected costs to something affordable.

Absent that, they are hurting their own cause.

It perhaps will come as a surprise to the environmental lobby that most conservatives share their goals. Including me. But they are hard to help, and even harder to love.

It will not surprise them that most oppose their tactics as counter-productive, and insulting, which is the same thing.

But they find the very riskiness of those same tactics — driving Virginians to walk a tightrope without a net — to be exhilarating.  That spices up the conversation during cocktails on the veranda.

Investing in politicians, not technology. For example, Virginia’s deep-pocketed greens have spent $23 million over the years on electing Democrats in state elections. What has been their return on that investment once Democrats were in full control of Virginia government?

The legislation left the actual costs open-ended. There are not even legislative targets for those costs.

Dominion Energy Virginia and American Electric Power are regulated utilities. Whatever they spend and those utilities’ state-guaranteed profits are to be paid for by rate payers. The bill pointed to no pacing technologies, their maturity or their risks.

The overall statewide fiscal impacts of this bill are indeterminate.

Undeterred, the Democrat votes alone carried the day. Their bill just said “do it.”

Favored consumers. The bill established the Percentage of Income Payment Program and Fund (PIPP), an attempt to protect poor households from the costs, shifting them instead to the middle class.

The bill provides an exemption to this charge for Percentage of Income Payment Program (PIPP) eligible utility customers, advanced clean energy buyers, and qualifying large general service customers. According to SCC, the number of customers who may qualify for this exemption is unknown.

People like the green investors in that bill with enough money to invest heavily in reducing the amount of electricity used in their homes are protected.

The Fund shall be supported by a non-bypassable universal service fee allocated to retail electric customers of a Phase I and Phase II Utility on the basis of the amount of kilowatt-hours used.

Virginia’s big donor greens have LEED homes, private solar farms, and $100,000 water-to-air geothermal HVAC systems. They think that the failure of others to “invest” the same for their homes is just a lack of social consciousness.

Bottom lines entirely unknown. So we know who pays, but we have no idea how much.  And the bill admitted that the General Assembly did not even know if the goals were technically achievable.

Follow-up study. The VCEA required the Secretary of Natural Resources and the Secretary of Commerce and Trade to report to the General Assembly by January 1, 2022 recommendations “to achieve 100 percent carbon-free electric energy generation by 2045 at least cost for ratepayers.”

It is illustrative of the design of that report project that the lead author was not McKinsey, or any other organization likely to conduct an unbiased, open inquiry. It was rather the Weldon Cooper Center for Public Service at UVa.

The recommendation from the Cooper Center’s modeling of the least-cost strategy:  replace virtually all carbon-producing sources of electricity in Virginia with utility-scale solar.

Given the current available technology, it takes approximately 6 acres of land for each MW of solar capacity. This implies that in 2035, the modeled utility-scale solar deployment would require about 96 thousand acres. This amounts to approximately 1.1 percent of Virginia’s land area. This level of land use change is comparable in size to other land-use changes that have taken place in the past, for example, for roads and urban development, but the solar deployment would occur at a much faster pace.

In the later years of the planning horizon, and especially in the high consumption scenarios, the amount of land required for solar deployment would be considerably larger. As an extreme example, in the high consumption case where only in-state renewable resources were allowed, the land required would account for more than 5 percent of the total land area of the state.

Got it. Nothing to concern us there.

A suggestion. I offer what I hope are constructive suggestions to my green friends.

Finally, and most importantly for your cause, don’t assume citizens are stupid. They are not and it will just make them angry.

Hiring woke academics to “validate” your tactics with preposterous scenarios like using 5% of the total land of Virginia for utility-scale solar will only make you enemies.

You have generated enough.

This entry was posted in Environment, Regulation and tagged Climate change, James Sherlock. Bookmark the permalink.