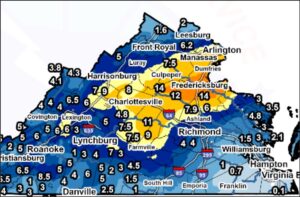 On January 3 and 4 of this year, a winter storm descended upon the Fredericksburg area and closed a large stretch of Interstate 95, trapping hundreds of motorists in freezing conditions for many long hours. The failure of the Virginia Department of Transportation, Virginia State Police and other state agencies to predict, prevent or ameliorate the horrendous conditions seemed an indictment of the competence of state government, and in particular the Northam administration.

Now comes an after-action report written by CNA, an Arlington-based research and analysis group, released by the Youngkin administration.

The conclusion can be summed up this way: Sometimes s*** happens. An unusual confluence of events occurred that day that created a series of cascading effects that overwhelmed state agencies’ ability to respond.

CNA did not draw any conclusions of a political nature. But it’s hard to imagine how state agencies or the Northam administration could have responded much differently, or to any greater effect.

As news reports made clear at the time, the weather conditions were particularly challenging. Rain was falling in the early morning of Monday, Jan. 3, but the temperature plummeted, turning the precipitation to snow. In the blizzard conditions — 11 to 14 inches in and around Fredericksburg — snow accumulated rapidly. Snow plowing commenced around 6 a.m. As the volume of traffic picked up, accidents began occurring. Tractor-trailers jackknifed, blocking multiple lanes of traffic. Trees fell, causing more blockages. Snow plows could not keep up with the blizzard conditions. Meanwhile, the same storm was causing accidents, tree-falls and undrivable roads on alternate transportation routes.

The report adds important perspective to the news accounts.

Rain had been falling in the two days before the snow storm, preventing pre-treatment of the interstate, a critical mitigation measure, and softening the ground. The Jan. 3 winter storm turned out to be the largest snowfall in the area in the previous six years. Moreover, the snow was wet and heavy, weighing down trees in saturated soil, causing far more than the ordinary number of tree falls.

Traffic volume was heavier than normal as well. Airline staffing issues due to the COVID-19 Omicron variant resulted in hundreds of flight cancellations across the U.S., including 200 at the three airports serving the Washington area on Jan. 2; more cancellations occurred Jan. 3. “As a result,” says CNA, “travelers coming back from winter breaks took to the roads in force, with many out-of-state travelers joining Virginians on the road.” Traffic volumes on I-95 around Fredericksburg on Jan. 2 and into Jan. 3 were 65% higher than on the same days in 2019.

In another COIVD-related stressor, tractor-trailer traffic on I-95 had increased 30% since 2019 as supply-chain issues put more trucks on the road and trucking companies spread out their hours of travel. Truck traffic peaked around 2 p.m.

All this — a surge in traffic amid a massive snow storm — came together in the Fredericksburg area, which, CNA noted, was confirmed by INRIX cloud-based traffic analysis as being “the worst traffic hotspot in the United States.”

VDOT mobilized for the snow storm, but could not keep up with blizzard conditions. Adding to the problem, plows and wreckers could not use shoulders as staging areas or to push snow, as many were blocked by work barriers and motorists attempting to drive who then got stuck. Some tractor trailers with brakes and tires not adapted to cold and slippery conditions experienced mechanical breakdowns, adding to the blockages caused by accidents. Reports of downed trees commenced as early as 8 a.m. on Jan. 3.

Cut-and-toss crews — both those that were pre-staged and those that were on standby — responded “but were soon overwhelmed by the sheer numbers of fallen trees, many entangled with power lines (VDOT cannot remove trees entangled with utility lines for safety reasons). More tree teams were called in, but they struggled to get to affected areas due to stopped traffic,” the report said.

Yet another complicating factor: While VDOT districts fulfilled their mobilization requirements, COVID-19 impacts to staffing meant that contractors had fewer resources to call on. And when VDOT could identify additional resources in less impacted areas, those resources could not easily get through the traffic to where they were needed. “For example, five contract trucks sent by the VDOT Hampton Roads District to the Fredericksburg area during the day on Monday, January 3 were seriously delayed by traffic, and six trucks from the VDOT Northern Virginia (NOVA) District arrived late — and only after arranging for VSP escort and taking the express lane.”

In its analysis, CNA asked why VDOT didn’t close the highway sooner. The reason was that there were no alternate routes available. Interstate 64, and U.S. routes 1, 33, 301 and 17 were “all unpassable or barely passable at different times of the day due to car accidents, downed wires and trees, and snow-covered roads.”

Hampering the response to this perfect storm of events, state agencies lost situational awareness, CNA said. Traditional methods of information gathering broke down and alternative methods proved unsuccessful. Traffic cameras stopped operating due to power outages. A state police communications center lost power for 30 minutes, interfering with dispatch capabilities. Drones could not be dispatched due to high winds, and the closest state police helicopter was dedicated to Med-Flight missions.

CNA said it is not useful in incidents like these to assign blame. “In our collective experience, we have never seen an example when one moment — or one person — was solely responsible for what happened during the response to an incident. Without exception, we have found that negative cascading effects during response operations stem from multiple issues with plans, procedures, policies, and preparedness (including training and exercises), not from the actions of individuals or even one organization.”

This entry was posted in Disasters and disaster preparedness, Transportation and tagged James A. Bacon. Bookmark the permalink.