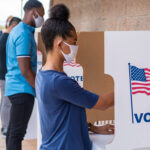 On February 11, 2020, the Virginia House of Delegates passed House Bill 177. If enacted into law, the legislation would have made Virginia a participant in the National Popular Vote Compact (NPV Compact), and would assign Virginia’s Electoral College votes to the presidential candidate who receives a majority of the popular vote in the United States. On February 25, 2020, the Virginia Senate Privileges and Elections Committee voted to defer consideration of the bill to the 2021 legislative session. The General Assembly should not pass legislation to make Virginia participate in the NPV Compact.

Under the Virginia Constitution, the people of Virginia are the sovereigns, not their elected representatives (Article I, Section 2). Important components of the people’s sovereignty are the right to vote, and the right to have a majority vote in an election respected and given lawful effect. Any legislation to make Virginia a participant in the NPV Compact would be an unconstitutional derogation of the sovereignty of the people of Virginia and diminish their voting rights in presidential elections.

Furthermore, the NPV Compact has no mechanism: (1) to protect Virginia from any breach of the Compact by any other participating State; or (2) to deal with a situation in which Virginia ignores the majority of Virginia voters to honor its commitment to cast its electoral votes in favor of the “national popular vote winner” and one or more other participating State(s) then ignore the Compact and cast their electoral votes to elect the other presidential candidate.

By passing House Bill 177, the Democrat majority in the House of Delegates: (1) acted in derogation of the Virginia Constitution; (2) demonstrated a lack of respect for the right of the people of Virginia to expect that majority votes in presidential elections will be honored and applied in the disposition of Virginia’s electoral votes; and (3) showed a lack of wisdom and prudence by passing legislation that fails to protect Virginia if any other participating State betrays its obligations under the NPV Compact.

When the General Assembly meets for the 2021 Session, the House of Delegates and the Senate should not pass another bill to make Virginia a participant in the NPV Compact. And, if the Democrat majority should not see the error of its passage of House Bill 177 in February 2020, then the Senate should demonstrate wisdom, prudence and respect for the Virginia Constitution and the people of Virginia, and refuse to pass such ill-conceived and ill-advised legislation.

Update: This column has been edited to correct an error in the original version mis-stated that the Compact has no mechanism to allow Virginia to withdraw.

This entry was posted in Electoral process, Federal and tagged Guest contributors. Bookmark the permalink.