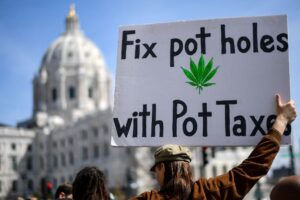 Up for grabs. In about three weeks Americans who haven’t already voted will go to the polls and vote. The presidency, the U,S, House of Representatives and the U.S. Senate are all in play.  Regarding the impact of the legalized adult use of marijuana in Virginia, the U.S. Senate is the key. That belief makes the relatively safe assumption that the Democrats will maintain a majority in the House. The reason the Senate is the key to recreational marijuana use in Northern Virginia involves Washington, D.C. Washington has already legalized the recreational use of marijuana.  However, the implementation of a retail capability to buy and sell marijuana has been thwarted by Republicans using federal appropriations bills.  That thwarting will end if the Democrats control both the House and Senate.

Effective legalization in northern Virginia. Washington, DC’s mayor and city council have been very clear that they would like to see retail marijuana dispensaries in the nation’s capital. D.C. already has medical marijuana so the grow operations and supply chain for distributing marijuana are in place. If national Democrats control both the House and Senate the next appropriations bills will not include language blocking retail marijuana sales in D.C. Last year’s Virginia General Assembly decriminalized possession of relatively small amounts of marijuana with what I consider to be a strong decriminalization bill.  The penalty for possession of up to an ounce of marijuana is a $25 fine. Cheaper, by far, than a parking ticket in Northern Virginia.

Paraphrasing Sarah Palin, many Virginians can see D.C. from their backyards.  Many Northern Virginians work in D.C., commuting there every day. Anybody watching a Washington hockey, basketball or baseball game does so from within the District of Columbia. The opportunity for Northern Virginians to legally purchase marijuana in DC will be limitless. The penalty for getting caught in Virginia with that marijuana will be $25, no matter how many times you get caught. Marijuana will have been effectively  legalized in Northern Virginia.

The cost of intransigence. Colorado has a population of 5.8 million people.  Northern Virginia has a population of 2.5 million people. Northern Virginia has 43% of the population of Colorado. Colorado collected $302m in marijuana taxes in 2019. Adjusting for population differences, that would equal $130m in marijuana taxes from Northern Virginians. There are certainly some variables – Colorado has been at this for years while D.C. would just be getting started, some parts of NoVa are pretty far from DC, etc. However, two things will be true when (not if) D.C. starts retail marijuana sales — Northern Virginians will be buying pot in D.C. and Virginia will be losing out on a very large amount of tax money.  This lost tax money will be collected by D.C., of course. Given COVID-19 and the economic pain imposed by Governor Northam’s shutdowns (intended to protect public health), this is a very painful time to miss out on possibly over a hundred million dollars of tax money.

The depth of delay. Legalization of recreational marijuana occurs in three stages — decriminalization, legalization of medical marijuana, legalization of recreational marijuana. Virginia is at stage one. The big step is from stage one to stage two. Decriminalization is easy. It just needs some words on paper, a legislative vote and the governor’s signature. Legalizing medical marijuana is much harder. A complete grow, distribute, prescribe and sell ecosystem has to be established. Medical marijuana dispensaries have to be opened. Once that ecosystem is built, expanding it for recreational sales is significant work but relatively straightforward. The bottom line is that even if Virginia wanted to legalize the recreational use of marijuana it would take quite some time to get there. During that period of delay, D.C. and most likely Maryland will be collecting taxes from Virginians legally buying marijuana in their dispensaries.