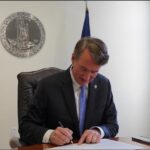 There is lots of interest, and not a little headline hyperbole, concerning the change in Virginia’s model policies designed to assure all children appropriate treatment at school.

Two different world views are apparent in the titles:

Both attorneys and general audiences will find interesting the way the authors of each document interpreted the United States Constitution.

Each referred to the first and 14th amendments. And Virginia laws. The differences in emphasis and interpretation were chosen to support their cases.

That is not surprising, but I think those differences make or break the case for the two policies.

I will let readers decide.

The First Amendment protects freedom of speech and expression. Schools may not prevent students from expressing their identity.

The Department is mindful of constitutional protections that prohibit governmental entities from requiring individuals to adhere to or adopt a particular ideological belief. The First Amendment of the U.S. Constitution guarantees religious freedom and prohibits the government from compelling speech that is contrary to an individual’s personal or religious beliefs.

Equal Protection Clause of the 14th Amendment: This clause guarantees every citizen equal protection under the law. It protects LGBTQ+ youth in schools from unfair or discriminatory school actions.

The Department also fully acknowledges the rights of parents to exercise their fundamental rights granted by the Fourteenth Amendment of the U.S. Constitution to direct the care, upbringing, and education of their children.

A parent has a fundamental right to make decisions concerning the upbringing, education, and care of the parent’s child.

The Code of Virginia reaffirms the rights of parents to determine how their children will be raised and educated. Empowering parents is not only a fundamental right, but it is essential to improving outcomes for all children in Virginia. [Link added.]

Youngkin Model Policies focused on “Privacy, Dignity, and Respect for All Students and Parents,” among whom transgender students are included.

The differences in stated interpretations of the constitution and in citations of related laws tell readers all they need to know about where the two model policies have headed.

The rest is details.

I suspect we will see these differing constitutional interpretations and “related laws” in court.