Regulations and the Costs of Doing Business in Virginia 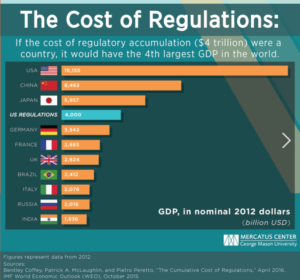 About the only category I found interesting in the “Top States for Business” rankings by CNBC, other than the progressive metrics that are featured in many of the categories, is “Cost of Doing Business.”

Virginia’s worst score among the six categories of metrics is that one. The methodology used for costs of doing business is defined, but vaguely:

As inflation ravages company balance sheets, we measure the strength of each state’s business tax climate. We also measure wage and utility costs, as well as the cost of office and industrial space. And we consider incentives and tax breaks that states offer to reduce business costs, with special emphasis on incentives targeted toward development in disadvantaged communities.

So, in this category, CNBC is grading government-imposed taxes and incentives as well as market-driven costs.

On the government side, the rating favors lower taxes and higher incentives. The “special emphasis” item may skew the results, but we do not know how much.

Lower taxes are conservative priorities. Government incentives which skew market forces and reward both politically trendy operations and big donors are not.

“Our Sources” for data and assessments include a lot of progressive organizations. That’s fine, they should use who they wish as long as they acknowledge them. The Tax Foundation can be characterized as conservative, which in this case means neutral.

Presumably, the Tax Foundation’s biggest impact on the rankings is in the category of costs of doing business. That is the category in which Virginia has its worst score. Conservatives don’t know whether that partially reflects a good thing — lack of government incentives; or a bad thing —  high taxes on businesses.

But conservatives also notice that CNBC did not include state regulatory burdens in its cost of doing business category.

That is so obvious an omission that it must reflect a conscious decision to avoid the fact that regulations have costs.

CNBC refers to regulations as a “framework” affecting “Business Friendliness,” the same category that includes “how hospitable states are toward emerging industries including cryptocurrency and cannabis.”

It is a fatal flaw making this particular rating category useless. Like the overall ranking.