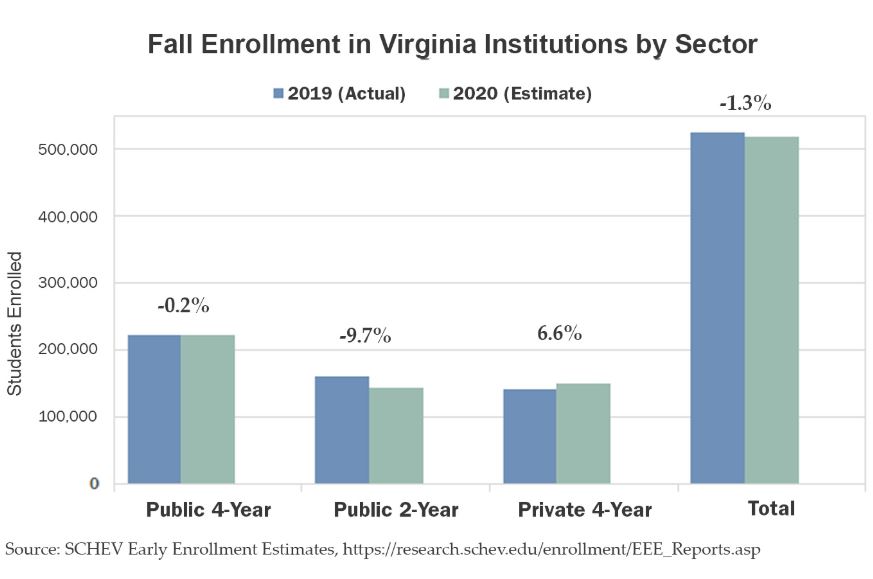 Undergraduate enrollment in Virginia’s nonprofit higher-ed institutions has declined only 1.3% this fall, far less than feared in many quarters, according to preliminary estimates released today by the State Council of Higher Education for Virginia (SCHEV). There had been widespread concern that measures to combat the COVID-19 virus would disrupt campus life and discourage students from attending.

The decline was concentrated in Virginia’s community colleges, where enrollment was down 9.7%. That was a reversal of typical patterns during an economic downturn in which unemployed workers go back to community college to brush up on skills useful in the workplace. By contrast, enrollment surged 6.6% at private four-year institutions and remained stable (down only 0.2%) at public four-years.

Other tidbits from the SCHEV report:

Any definitive conclusions regarding trends among private colleges, however, must await an institution-by-institution look.

Meanwhile, looking ahead to when the official November enrollment numbers are reported, SCHEV says it will endeavor to ask a number of questions:

Other questions worth asking: To what degree did colleges and universities either (a) discount tuitions or (b) relax admissions standards, and how did those policies affect the in-state, out-of-state mix?