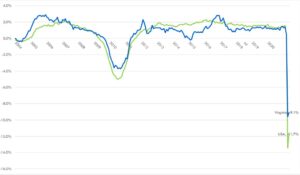 Virginia and US employment fluctuations since 2004, showing the dip in 2009-10 and plummet in the last four months. Source VEC. Click for larger view.

By the end of this amazing year, almost 1.5 million Virginians may have filed claims for unemployment insurance payments, leaving the state’s once-record unemployment trust fund balance of $1.5 billion reduced to $750 million in the red, legislators were told this morning.

That $2.25 billion swing is due to $2.6 billion spent out of the state fund, to cover basic unemployment benefits. To date, the federal government has supplemented that with another $6.3 billion paid to Virginian under special COVID-19 related benefits, which do not come out of the state trust account.

Those were a couple of highlights of a briefing Virginia Employment Commissioner Ellen Marie Hess provided to a panel of legislators in a virtual meeting. The state’s joint Commission on Unemployment Compensation had not met in a year, so the slides she had today show a stark change from previous rosy reports.

Keep that $750 million of red ink in just one state special fund in mind when the politicians come with their happy-talk about how well the state did as Fiscal Year 2020 closed out. To focus only on the state’s general fund when assessing this crisis is to wear blinders. The combined deficits in 2010 and 2011, after the last recession, were less than $200 million.

Hess and her staff have been crushed under a tsunami as an unimagined number of claimants sought a series of just-invented new benefits, using bureaucratic systems that are creaky even in quiet times. She provided a bit of insight to the challenge in a guest column in Saturday’s Richmond Times-Dispatch, and during the meeting legislators seemed reluctant to pile on with criticisms.

At this point, she told legislators, 91% of applicants are seeing benefits within 14 days of filing. The number of people exhausting all their benefits without returning to work is also shooting up.

The slides she shared, and she admitted this, may still be too optimistic, and neither in the slides nor her comments would she predict what comes next. Under normal circumstances, the state trust fund’s plunge into deficit would be addressed by massive new taxes on every Virginia workplace. At the peak after the 2008 recession, the average tax per worker was 330% higher than the current $70.

Nothing from 2008-2009 is applicable to this economic disaster, and that peak tax of $236 per job slot will likely be exceeded in the coming years. Hess said the higher taxes both rebuild the fund and repay any federal loans to keep it afloat. Only if the federal government were to waive repayment of those loans would the coming tax hikes moderate.

That is not something the federal government has done before. But precedent hasn’t mattered in previous legislation passed to respond to COVID-19, so perhaps the loans will be forgiven. It would still be wise for employers to expect “significant” (Hess’s word) tax increases come January.

That $750 million deficit projection as of December 31, a staff economist explained, is based on several steady state assumptions that could be blown out of the water by further economic restrictions. You can see in the slides VEC projects only small decreases in 2020’s ongoing tax revenue or interest compared to last year. It also could be changed by federal actions ordering additional months of payments or other eligibility changes.

As has happened with all the other such legislative bodies, the membership has changed to reflect the new Democratic majority in both legislative Houses. Republican Delegate Lee Ware of Powhatan has handed the gavel to Henrico Democrat Lamont Bagby. The three Senate members are all Democrats, so the partisan split overall is now six Democrats and two Republicans.

Some of the new members showed interest in diving right in to offer their help, calling for another meeting of the panel in a couple of weeks to discuss possible legislation to be considered at the August 18 Special Session. That led to a caution from some senior members over just what issues would be allowed for consideration, so far limited to budget matters and criminal justice reform.

But what can’t be addressed in August will keep until January, by which time a deeper deficit may be evident, the pandemic will or won’t be fading, and the bite on employers will be known, at least for 2021.