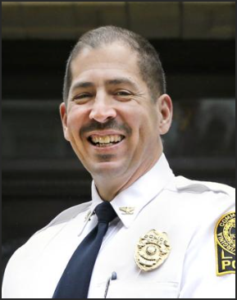 A new “resource” will be available to the LGBTQIA+ community in Richmond. Virginia Commonwealth University — yes, the same institution that recently lost $470,000 in a cyber scam — has assigned two campus patrol officers as “campus LGBTQIA+ liaisons.”

A recent university announcement noted that VCU Police Chief John Venuti has designated the two liaisons as part of the department’s “culture of inclusive community outreach for officers and staff.”

VCU News said only this: “While the department mandates Safe Zone training for all staff, Officers Hakilah Hudson and Briana Jackson will actively collaborate with offices and groups for outreach and events on both campuses and will be the points of contact for groups on and off campus.”

The VCU page on LGBTQIA+ Liaisons adds this:

The VCU Police Department serves VCU with PRIDE and believes in treating each and every individual with dignity and respect. At VCU Police, we believe every interaction with a community member is important and we believe in making sure individuals get the assistance they need to stay safe and be successful at VCU.

Many of our officers and staff members are VCU Safe Zone trained and VCU Police headquarters is home to the TDoR RVA Transgender Day of Remembrance Tree. The department is committed to working with students, faculty, staff and interest groups across the university and the LGBTQIA+ liaison officers are assigned to collaborate with various offices and groups for outreach and events. LGBTQIA+ liaison officers are the point of contact for on and off-campus groups.

The closest thing to an explanation can be found in a quote by Hudson in the VCU article. “With the growing concerns between law enforcement and the community, I wanted to be a link that builds those relationships back up. I want to bridge the gap between both groups by establishing an open line of communication and engaging in events that support LGBTQIA+ individuals.”

Bacon’s bottom line: Apparently, there are “concerns” about the relationship between VCU law enforcement and the LGBTQIA+ community. It is not clear what those “concerns” are. Are members of the “LGBTQIA+” community (as opposed to the old “LGBTQ+” community) at special risk of crime victimization? Have they been unfairly harassed by VCU police? Have LGBTQIA+ events been disrupted or hassled in any way? In other words, is there any justification for the staffing of two police officer positions other than the signaling of VCU’s virtue?

VCU police already attend mandatory “safe zone” training: two-hour workshops to “deepen their understanding” of sex, gender, and sexuality; recognize heterosexism, biophobia, and transphobia; and “examine and challenge” their own biases, assumptions, prejudice and privilege. Is that not enough? If not, why not?

When the cost of tuition, fees, room, board, books and supplies runs almost $30,000 a year for an undergraduate in-state student, VCU needs to do a better job of controlling its costs. If it wants to add two new staff to liaise and collaborate, it ought to have a well-articulated justification. No such justification is apparent.

This entry was posted in Education (higher ed), LGBQT rights, Police reform and tagged James A. Bacon. Bookmark the permalink.