Great Moments in the Annals of Virginia Transportation 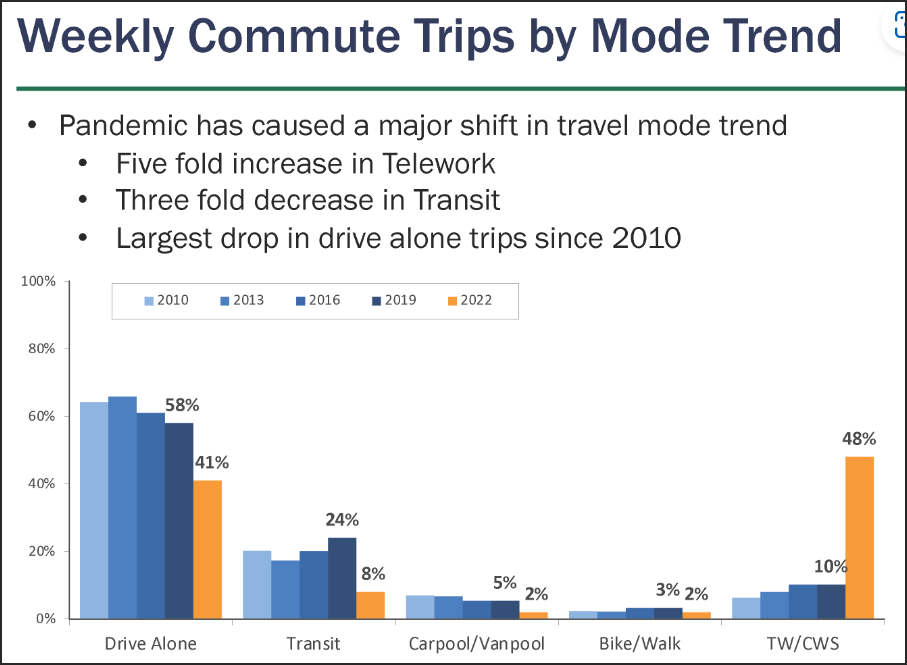 Item #1: The Metropolitan Washington Airports Authority (MWAA) will pay the lead contractor on the long-delayed Silver Line rail extension $207 million more as part of an agreement reached in July, reports The Washington Post. The Silver Line extension to Washington Dulles International Airport is four years behind schedule. Under the funding agreement, the cost of managerial incompetence will be borne… not by MWAA… not the lead contractor… not even the individuals riding the commuter rail system… but by users of the Dulles Toll Road on the theory that they will benefit from the reduction of traffic caused by the diversion of traffic to the rail line.

Which brings us to Item #2.

What are the odds that the projected Silver Line ridership will materialize? According to a Metropolitan Washington Council of Governments survey, telework has surged in the Washington metropolitan area, increasing five-fold since 2010, cutting into drive-alone commutes and devastating transit commutes. The percentage of commuters using transit is one-third of 2010 levels.

Despite the history of overruns, chronic losses, and plunging ridership, the state and localities continue to pour money into mass transit. State support for the Department of Rail and Public Transportation in Fiscal 2023 is $144.6 million. At least that’s down from $201.9 million in Fiscal 2022. (That doesn’t include funds provided by localities and regional transportation districts.)

Look, there was a powerful case for mass transit a decade ago. Mass transit supported denser development and redevelopment during a time when people wanted to move back into urban centers. But times change! The back-to-the-city movement is losing momentum due to high taxes, high crime, and horrible public schools. Meanwhile, the response to COVID-19 made telework a viable option. While some telecommuters may return to office work, commuting patterns will never be the same.

It’s time to reassess our thinking about transportation funding, which was predicated on never-ending increases in commuting and vehicle miles driven.

This entry was posted in Transportation and tagged James A. Bacon, mass transit, Rail to Dulles. Bookmark the permalink.