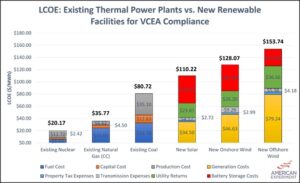 Center of the American Experiment estimate of the cost per megawatt hour of different forms of electricity generation. The red section it adds to renewables is the cost of battery backup. Click for larger view.

By 2050 Virginia’s transition to wind and solar power under the Virginia Clean Economy Act (VCEA) could add almost $200 a month on average to a residential electric bill. Previous estimates of the consumer cost of dumping all fossil fuels from power generation have focused on the next ten years or so, but a new analysis looks beyond that to the actual deadline for the completed conversion.

Commercial and industrial customers would see comparable explosions in cost. These projections are far higher than those prepared by our own State Corporation Commission for two reasons: the SCC estimates do not cover the later years when the utilities must reach full compliance, and therefore do not include all the coming new investments into the late 2030s and 2040s.

The Center of the American Experiment in Minnesota, which has looked at similar proposals around the country, estimates that Virginia energy ratepayers of all classes will need to pay out an extra $203 billion over two and a half decades, close to half of it the utility profit margin on the massive new solar, wind, battery and related transmission facilities.

The Virginia General Assembly is currently considering either repealing or amending the 2020 VCEA, which dictated that Virginia’s major electric utilities must eventually stop using coal, natural gas or other fuels that emit carbon dioxide. 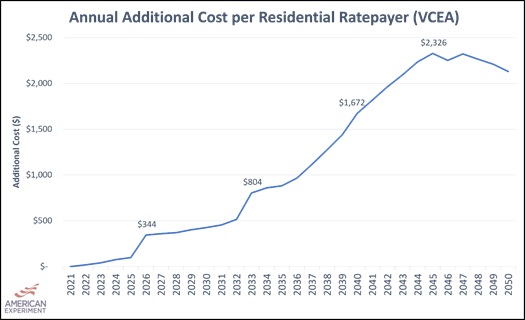 Center of the American Experiment projection of residential costs of compliance with the Virginia Clean Economy Act out to 2050. This is cost per ratepayer, not an estimate based on a “typical” bill as the utility likes to do. Click for larger view.

For the periods covered by the SCC reports, the CAE report lines up closely on cost. But its 2050 combination of assets includes far more solar panels and battery storage than anybody has talked about so far and adds 7,500 megawatts of land-based wind turbines, in addition to the coming offshore wind mandated in VCEA. It assumes no more than the 5,200 megawatts of ocean wind turbines already included in VCEA, because of the high cost.

It predicts a total of 105,000 megawatts of generation and storage will be needed to reliably serve Virginia, about four times the current fleet. The amount of steady and reliable generation not dependent on the weather will decline from 25,000 megawatts now to 8,000 by 2050.

The authors of this study are not utility engineers or expert accountants and were hired by a partisan group leading the fight to repeal the VCEA. They rely on models to design a likely generation network that complies with VCEA, and estimate its costs based on current industry information in the public domain. The old rule applies: all models are wrong, but some models are useful. This is useful.

Their main point is one that has been made by others. The VCEA will introduce such a huge dependence on wind and solar assets that are subject to weather interruptions that massive battery installations will be necessary to back them up. Those installations will sit idle most of the time with the meter running. The authors have looked at performance data on existing wind and solar installations to predict how often and for how long that will happen.

A 64-hour brownout? When your system depends on 51,000 megawatts of solar panels and 12,700 megawatts of wind turbines, calm and cloudy days are going to be a challenge. The nuclear and hydro plants which will remain in 2050 will not be enough to pick up the slack, and battery discharges are of limited duration. Since other states are also killing off their fossil fuel plants (and some are killing their nuclear) you cannot depend on imports to keep the lights on.

But it should be there. Intermittency needs to be assumed and priced in. Batteries are not generators.

This will not work. The VCEA-created system mandated in state law will be unreliable and incredibly expensive. The utilities know this but won’t say it out loud. The SCC experts know this but haven’t been asked to project to 2045 or 2050. But both the utilities and the SCC are dancing around the truth, and even some Democrats may be waking up.

The CAE report seems to treat the Virginia electricity system as an organic whole, not focusing on the different companies and territories. Most of these costs will be imposed on Dominion Energy Virginia customers, about 70% of Virginians, and regional price variations may grow. The report also disregarded the huge tax incentives for renewable investments the utilities may reap, in recognition that those merely shift costs from ratepayers to taxpayers but do not reduce the real cost.

Democrats in the state Senate are expected to kill the repeal or reform bills pending. That also just shifts something but doesn’t avoid it. It shifts from now to sometime in the future the point at which Virginians realize this is not going to work, they cannot afford it, and start work on something viable.