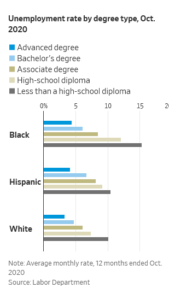 Here is another salvo in the culture wars that have been reflected on this blog. An article in a newspaper today begins with this sentence: “From advanced-degree holders to high-school dropouts, Black workers have substantially higher unemployment rates at every level of educational attainment than white workers….”

And which woke newspaper with a critical race theory bias ran this article? Why, the Wall Street Journal, of course!

The article goes on to say that the disparity between Blacks and whites increased this year during the pandemic. (Black unemployment levels exceed those of Hispanics at every educational level, as well.) Finally, not only are Blacks more likely than whites to be unemployed, they are more likely to be underemployed. “Black employees with full-time jobs also earn less than similarly educated white workers.”  The article quotes one economist as saying, “Frequently, Black workers need to send additional signals about their qualifications to get the same job. That’s why you’ll see a Black person with a master’s degree in a job that only requires a bachelor’s.”

The article suggests several reasons for these discrepancies: