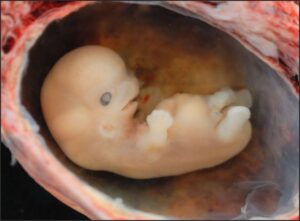 If this clump of cells has achieved “personhood” the legal implications are endless.

As time passes, it seems a safe bet to conclude that the U.S. Supreme Court decision in Dobbs v Jackson will be deemed an upheaval to American culture and politics greater than that of Brown v Board of Education.

Dobbs may have unleashed a kraken-worthy pandemic of civic monsters to rival that of Greek mythology. The decision is drawing embryonic and heated demands for a national absolute ban on abortions based upon a theory of “life at conception,” or fetal personhood, that augurs to redefine and upend well-settled related public policy and laws. The tumult emerging from Dobbs will make the half-century precedent of Roe seem peaceful.

Thirteen states have already adopted laws to ban all or most abortions, with eight protecting the fetus from the moment of conception without conferring personhood. However, Louisiana is presently considering legislation requiring the state to “fully recognize the human personhood of an unborn child at all stages of development prior to birth from the moment of fertilization.” Life at conception is sufficiently close – theologically and legally – to fetal personhood as to be only finely distinguishable.

The Commonwealth’s political leadership, for the moment, appears not to be poised to mimic Louisiana, but Old Dominion advocates are not hiding their aspirations for a “no compromise” ban on abortion as the state’s rule.

At a rally in Richmond, U.S.  Rep. Bob Good, VA-5th, a proud self-proclaimed biblical conservative, along with Del Marie March, R-Floyd, who has announced plans to introduce “life at conception” into the General Assembly, have urged adoption of a total ban on abortion in Virginia. Governor Glenn Younkin, seeking to become an erstwhile governor, publicly declared his pro-life belief and adherence to life at conception in a TV appearance on Face the Nation while reiterating his political preference for a 15-week ban. That compromise provides some cover as he explores his national ambition.

To be clear, abortion limits or outright bans are not the exact equivalent of life-at-conception demands but come close. Neither precept can be validated scientifically, as each relies upon notions such as ensoulment or personality making it more theological than secular. At the same time, life at conception, like abortion, does not appear in the U.S. Constitution, but is seen by its advocates to pose no barrier to the theological principle since the nation is, according to some, Judeo-Christian.

For the moment, we can leave aside the dispute concerning the religious beliefs of Jews and Christians on abortion limits to consider other possible consequences of amending the nation’s cultural and legal values to the principle of life at conception.

Recently, in Texas (naturally) a pregnant woman cited for traveling in an HOV lane countered the offense by claiming her unborn fetus qualified as a person for purposes of the state’s traffic regulations. Virginia has several posted HOV +2 and +3 interstates offering targets for challenge to police monitors. Federal and state tax provisions – dependent deductions – are certain to be affected with respect to the inclusion of unborn persons. But these likely signal only the most nascent conundrums to challenge existing law, jurisprudence, criminal justice, cultural, and moral precepts.

Article I, Sec. 2 of the Constitution provides that the census shall count the “whole number of persons” in each state. The Fourteenth Amendment reiterates that command and further requires that no state may “deprive any person of life, liberty, or property without due process of law; nor deny to any person within its jurisdiction the equal protection of the laws.” In the scheme of government, census data is crucial in light of the fact that the US experiences some 3.6 million births per year. Theology and jurisprudence are on a collision course without clear assistance from science on the issue.

A GOP Delegate has called upon Gov. Youngkin to use the power of the state’s purse to restrict abortion services at public universities. It should not be long before Virginia’s religious intellectual centers (e.g., Liberty and Regent universities) weigh in on the topic. Former Congresswoman (R-MN), Michele Bachmann, now dean of Regent’s School of Government, declared recently on Steve Bannon’s podcast that abortion was the cause of the nation’s immigration problem at its southern border (readers must riddle this observation for themselves).

Estimates of Virginia’s Catholic population range from 9-12%, but a recent Pew poll indicated that 67% of the laity believed the Roe precedent should remain. That opinion clearly differs from that of the church’s hierarchy. In the absence of credible and acceptable  scientific information, citizens will be left to elect among competing moral and ethical beliefs to inform political choices.

It may be that in vitro fertilization (IVF) probably presents the most serious and knottiest of difficulty for lawmakers and individuals desiring to experience parenthood, and physicians, to reconcile. Like the Texas woman challenging a traffic regulation, IVF, involving multiple embryos, divorce proceedings about embryo possession, among a few, are even more complex and nuanced. Disposal of frozen embryos is unsettled under Virginia law and decisions in several foreign state courts have not contributed to any common resolution even in the absence of fetal personhood. The Commonwealth hosts several such clinics and laboratories.

The national and state criminal justice systems could be burdened with a somewhat different set of conflicts with respect to life at conception in law enforcement, jurisprudence, and imprisonment. The Thirteenth Amendment proclaimed that “neither slavery nor involuntary servitude, except as a punishment for a crime whereof the party shall have been duly convicted, shall exist within the United States.” Pregnant women, from arrest, to trial, to sentencing present complicated personhood considerations, not to mention practical physical care procedures along the spectrum from arrest to incarceration. What is the response to the pregnant woman refusing to testify under Fifth Amendment privilege to protect the person in utero?

Amusement parks (Busch Gardens and Kings Dominion) with thrill rides must review current liability warnings to consider new restrictions for pregnant women; public transportation fares may be upgraded to accommodate fetal personhood passengers. Youngkin and his allies may be comfortable with a 15-week abortion limit compromise against the ultra-pro-lifers as progress, while it also offers deniability from extremism for acceptance on a national stage.

Commercial bargain offers of twofers in commercial aircraft may become threefers or more. Although women constitute at least one half of the U.S. population, their representation in the seats of power and decision making are far less. Males dominate legislatures and judiciaries passing laws and rendering judicial findings about a most intimate experience. The actual political and cultural fallout from Dobbs remains to be identified.

SCOTUS will face a myriad of legal conflicts emerging from the certain differences among 51 state jurisdictions which legislate on life at conception.  The present tenured justices at SCOTUS will be long-gone while their successors struggle to cope with the manifold cases and controversies spawned by fetal personhood. History may judge that this SCOTUS exercised a lack of judicial restraint in overturning Roe. Instead, Dobbs proffers an uncompromising prospect laden with unnecessary pain.

Jim McCarthy is a former New York attorney who now lives in Virginia.

This entry was posted in Abortion and tagged Jim McCarthy. Bookmark the permalink.