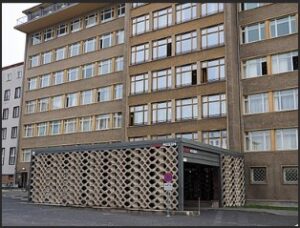 Charlottesville’s City Hall used to be open to its citizens. We could go talk to people. Ask questions. Learn.

No longer. Front door locked. A guard in an air conditioned box. A citizen has to justify going inside. Where? Seeing whom? Why?

The guard calls upstairs to where I’m supposed to go, but no answer. She calls somebody else to let me in the door. I climb the stairs to the second floor and find… a newly installed second locked door. With camera. And a buzzer system.

I need to deliver something to the City Attorney. Buzz. Nobody answers.

City Communications? Buzz. Nope. The corridor is a lifeless emptiness.

Eventually, a staffer trudges to the door, opens it. Apparently saw me on the security video feed buzzing all the buzzers.

I won’t name her. I will just say she looks wary, fraught. Even her hair. As if the anxiety in the air frazzles it.

I ask: “Why all these locked doors?”

“It’s security! Do you not read the papers?!”

In the papers of late to be sure, carnage. Mass shootings. Even faux-shootings, like in Harrisburg, Pa., this 4th of July. Firecrackers popped and somebody shouted, “Gun!” Cell phones, purses, picnic blankets abandoned, as the panicked crowd stampeded.

I ask who put in the barricades and cameras?

“Which City Manager?” Charlottesville has had six in five years. The current one is a rental.

Apparently the Stalinesque chic was the brainchild of the City Manager whom City Council fired two or three City Managers ago — for being Stalinesque. Purged the competent who threatened his hegemony; installed loyal apparatchiks.

A subsequent City Manager fired the Police Chief hired by the earlier City Manager for “reforming” the police department to the point of open rebellion. The former chief is suing the City for $10 million for race, color, and gender discrimination, among other things. And the City Manager who fired her, himself resigned shortly afterward because of Charlottesville’s toxicity, its “public vitriol.”

Charlottesville’s police force at this point is down about a third of its strength. Not so much defunded, as defamed. Police aren’t in it for the money. They do it for the honor of serving. Take away the honor, appreciation for dangerous and sometimes heroic duty — instead insult them with a Civilian Review Board second guessing every parking ticket for race discrimination? Of course they quit.

A threadbare police force. Acrimony, upheaval and dysfunction in city government. Shootings in the paper. COVID everywhere. Inflation. Hair- frazzling, to be sure.

Our late 1960’s City Hall always had a graceless cinder block aesthetic. Dressed up with new locks and cameras it now looks like a Soviet jail, or maybe East German Stasi. Government officials afraid of their own citizens always and everywhere seem to imprison themselves behind drab grey doors.

“All the Virginia City Halls are like this now,” I am told. A bureaucrat’s yearning for safety against the howling mob is understandable, but wrong. Virginia officials are not supposed to hide from us. The law says:

… By enacting this chapter, the General Assembly ensures … free entry to meetings of public bodies wherein the business of the people is being conducted. The affairs of government are not intended to be conducted in an atmosphere of secrecy … Va. Code §2.2-3700, Virginia Open Government law, aka Freedom of Information Act.

But “security” wins against openness, every time. A friendly gab to find out what’s up — no longer possible. City bureaucrats know what they know, do what they do, when and why they choose, in anonymity. Citizens are surplus. Access only by permission.

Writing to the Virginia politician John Taylor in 1814, John Adams observed gloomily that “democracy never lasts long. It soon wastes, exhausts and murders itself. There never was a democracy yet that did not commit suicide.”

If this really is happening all across Virginia, maybe it’s time at the very least to revisit the FOIA law. Require not just open information, but open doors.
It may not stop the downward slide into a grey Stalinist bureaucracy unaccountable to the citizens, governing with impunity. But its a start.

Jock Yellott is a retired attorney in Charlottesville and an occasional contributor to Bacon’s Rebellion.