In Canada, three-card monte is illegal. It is banned by name in Canadian law because the mark has no chance of winning. In fact, anyone who wins can be presumed to be a shill.

For the left, the cards are race, gender, climate and guns.

They have made accusations of systemic and individual racism the cornerstones of their strategy. They have made misogyny more complicated than it used to be, yielding yet more potential victims and oppressors. Climate is dogma — everyone will die soon unless we destroy the economy. Or maybe die anyway. But time is of the essence. The Second Amendment is objectively evil.

Victims are everywhere. They are necessary not just to election victories, but as objects of oppression to shut down debate. Progressives are destroying America with the outcomes of their policies, so discussions of those outcomes and those who discuss them are banished from the public square.

Policy prescriptions are what count. Adverse outcomes of those policies are never raised, except, of course, by racists, misogynists, climate deniers and gun nuts.

If we need a seminar in people of the left going to their thin card deck regardless of the subject of a public discussion, we can read Jock Yellott’s brilliant article on the dysfunctionality of Charlottesville city government using the desert that is city hall as the center of his allegory.

Then glance at the utterly predictable commentary from the left — “it’s guns.” Or go to the comments on pretty much any article on this blog.

Mr. Yellott reports on the complete dysfunction into which the government of Charlottesville has descended.

Charlottesville has had six city managers in five years. Each pledged to overturn the policies of the reprobate who preceded him or her. Several fired the police chief to mark their territory and hired a new one. A chief that the next city manager fired.

Fun to be a Charlottesville employee. Whether the chief of police — effectively a temp position — or just a mid-level functionary.

Mr. Yellott chose not to report on under-performing schools. Read that page and weep if you care for the futures of the children of that city.

We read about Charlottesville government less and less because of the collapse of investigative reporting there. We will seldom read about it at all in a year or so with the demise of the local newspaper. At least on the daily summaries of news that we find on the internet. Insert the tree falling in the forest analogy.

The comments of the left make the dysfunctionality revealed by Mr. Yellott 100% about guns, because it’s all they have in this case. The hammer and nail analogy.

If the city government were not dominated by a racial minority, they would play the systemic racism card. If there were not women in that government that would be the issue. If climate change is a contributing factor, they missed it.

There are no other cards in their deck.

The rest of us don’t want guns in the halls of government. But we offer an actual solution.  Screening of visitors and employees in and out. The General Assembly has figured it out. That is the solution you see when you go to visit your delegate or senator in the state capitol. Next case.

The left cannot bring itself to discuss a general breakdown of society that is magnified in Charlottesville because the city government, led by the woke, gives it permission and even racial-grievance encouragement.

They cannot write about the competition among the city’s politicians to see who can best lead the Charlottesville government in a continuing race to the bottom.

Adverse outcomes of progressive policies must be blamed on one of their cards. In the case of Mr. Yellott’s article, they blamed guns, and then congratulated one another on the brilliance of that analysis.

Policing. Mr. Yellott mentioned the Charlottesville police force, a key part of the criminal justice system in that city.

The other component, the Commonwealth Attorney’s office, is led by the Honorable Joseph D. Platania, a proud member of Virginia Progressive Prosecutors for Justice. Of course.

He joins others who “support and advocate for commonsense criminal justice reforms to make their communities safer and the commonwealth’s justice system more fair and equitable.” We’ll see below how the safer part is working out in Charlottesville.

The left describes policing itself as the problem. The force needs better leadership, they say. Better training. Better understanding of the upbringing, social pressures, wants and needs of the criminal. Of restorative justice. Of the basic unfairness of requiring bail.

Progressives believe that, and they are welcome in America to offer it as policy.

But as a result, Charlottesville police have jobs both dangerous and vilified. That force has only a third of its authorized end strength.  Try to imagine why. But the left, having virtually criminalized policing, cannot discuss that unless celebrating it.

They also can’t talk about the outcomes of under-policing. A narrative thing. Crime in the streets has few consequences in Charlottesville. 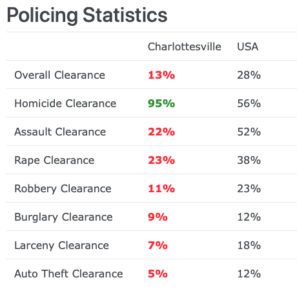 Good job on the murders. The rest of it needs work. If there were cops to work on it. And a Commonwealth’s Attorney inclined to prosecute.

Substance abusers and the mentally ill roam Charlottesville streets, especially its signature Downtown Mall, un-policed. A generous, well-meaning donor built a homeless shelter in an abandoned church a block from the mall. The city approved the zoning in that spot. The residents are pushed out the door after breakfast. Thanks.

From a story in The Daily Progress on September 1, 2021 headlined “Charlottesville Terminates Police Chief RaShall Brackney“

Brackney, who was hired by the city in June 2018, will be on paid administrative release until Nov. 30.

Assistant Chief of Police James Mooney, who was set to retire Wednesday, will remain in his position in an apparent reversal of decisions.

An outlier? Well, no.

In a council-manager form of government, the Chief of Police reports directly to the City Manager. Across the state, city councils take varying levels of “advisory” roles in appointments.

Poison politics. In Charlottesville, as in many of Virginia’s cities, city council elections feature promises to sweep incumbent appointees out of office.

City managers take note and try to stay ahead of the guillotine when the most aggrieved candidates win. The first to go is usually the police chief. City managers, like the Jacobins, don’t survive anyway.

Charlottesville has had six city managers in five years.

A recent timeline of Charlottesville Chief of Police appointments:

2018
May 15: City Manager Maurice Jones recommended RaShall M. Brackney to replace Al Thomas as Charlottesville’s chief of police. Jones said Brackney was the top choice out of 169 applicants.
May 16: Mayor Nikuyah Walker expressed concerns she had with the police chief selection process. In the video, Walker said there is a disconnect between the City Manager, the City Council and other leaders in Charlottesville. “We were kept out of the process,” she said, referring to the search for a police chief. “Council was not able to participate at every stage of this process.”
May 21: At its regular Monday meeting, the Charlottesville City Council (2018-2019) formally considered Dr. Brackney’s appointment. The council approved a resolution blessing the decision of City Manager Maurice Jones to hire her.
June 18: Dr. RaShall M. Brackney was sworn in.”

See above for Chief Brackney’s fate.

Bottom line, progressives have guns, race, gender and climate as the answers no matter what the question.

Charlottesville’s problems of governance were reduced by those citizens commenting on Mr. Yellott’s article to a Second Amendment issue.

My journalistic career has been marked by advocating for the poor in education and health care. Irrelevant.

By demonstrating that the chaos in Charlottesville government is not a guns issue, I risk be called a racist, a term in such common use that it is part of the background noise and waits for any public conservative no matter what the issue. Or perhaps a gun nut in denial. Accusations of misogyny and climate-denial are just a story away.

I don’t care. The braying of donkeys.

Progressives have only have four cards, and they play them. In an endless loop. Folding is clearly not an option.

This entry was posted in Crime , corrections and law enforcement, Culture wars, Governance and tagged James Sherlock. Bookmark the permalink.