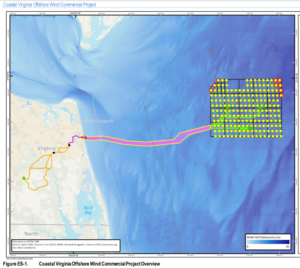 Illustration of Dominion’s wind project from its Bureau of Ocean Energy Management documentation.

Customers of Dominion Energy Virginia will begin to pay for its planned 176 wind turbines off the coast of Virginia Beach next September, years before the first electricity is produced, if the company’s request for initial project funding is approved by the State Corporation Commission.

As with all such projects now, the bill will be paid through a specific addition to monthly bills, a rate adjustment clause or RAC. The cost for residential customers will work out to $1.45 per 1,000 kilowatt hours, but that is just for the first rate year beginning in 2022. In a news release Friday, the company claimed eventually the “net” cost to residential users would be $4 per 1,000 kWh, but that includes assumptions about future tax benefits and future costs of the alternatives abandoned.

The gross cost to consumers may be buried somewhere in the mound of Dominion documents that now constitute the full application. Or it may be among the items of data which the company seeks to withhold from public view.

On Friday, the record of the case was just a few cover letters and the company’s motion asking the SCC to let it keep much of the key information confidential.  Monday up to 40 (40!) additional documents were posted on the SCC’s case file, full of some details, but reviewing a table of contents one can see example after example of information redacted, in anticipation of SCC approval of the motion for secrecy.

Construction costs by type and year? Projected operational and maintenance capital and costs per year  What needs to be secret about those?

Once information is deemed confidential, any courtroom testimony or debates among the parties involving those issues then take place behind closed doors. Formal interrogatories seeking  more data related to them stay sealed, as well.

It is not unknown for those requests for confidentiality to draw opposition, sometimes from the Attorney General of Virginia, SCC staff or from others who file as parties to the case. What can and cannot be withheld will likely be the first debate in this case, which state law dictates must be decided by nine months from now. But the case parties themselves have access, and providing raw data to the public has not always been a high priority.

What should be the key issues before the Commission really cannot be debated anymore. There is not much suspense in the case, really, because under the 2020 Virginia Clean Economy Act the project is presumed to be in the public interest, and its costs are deemed prudent if they stay under the quite generous price target of a levelized cost of energy of $125 per megawatt hour in 2018 dollars. The Democrats who ran the General Assembly that year drove a pillow soft bargain.

Will the 2022 General Assembly restore full SCC authority over the prudence of the project and its cost? With Europe now in an energy crisis due to persistent low wind volumes, requiring the use of coal to provide electricity to the big climate crisis pow-wow in Scotland (don’t you love that), can the word “prudent” even apply?

For a lay person being paid by nobody to undertake the task, the prospect of reviewing these initial hundreds of pages is daunting. It will probably take a full review of what is on the record before any organized reporting on this matter can be attempted. With the link to the case file, others can join the effort. The propaganda in its favor will be overwhelming, and that will need attention as well.