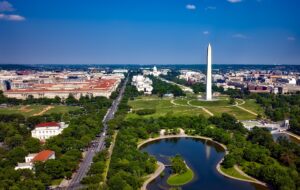 D.C. Statehood. There has been a long running chorus of cries for D.C. residents to have full representation in Congress. From “Taxation Without Representation” slogans on D.C. license plates to the Biden Administration’s calls for DC to become the 51st state … this debate has gone on for a while. Most discussion devolves into pure politics. D.C. would bring two more liberal U.S. senators and a liberal U.S. Representative who can vote. People either love or hate that idea. Back in May I wrote a column on this blog about Northern Virginia joining D.C. in the 51st state.  In this column I’d like to put aside the politics and focus on the ethical considerations for making D.C. a state.

Because they’re Americans. The nearly 700,000 residents of Washington,  D.C., pay their full share of federal taxes. Residents of D.C. were subject to be drafted in times of war, fought and died in our country’s battles and are required to obey all laws passed by Congress. In other words, D.C. residents have all the responsibilities of American citizenship. However, they are not represented in the U.S. Congress. They have no senators and their one representative can’t vote. The biggest ethical reason to make D.C. a state is so its citizens have all the rights of being American, including the right to representation in Congress.

The right to succeed. If one believes that statehood would provide the remedy to disenfranchisement of D.C. residents the next question is how that state should be formed. D.C. is not a state.  In fact, it’s not much of a city. At 68 square miles it doesn’t even make the list of America’s 150 largest cities. From Riverside, Calif., to Caribou, Maine, America has more geographically substantial cities than D.C. Is it ethical to make a large neighborhood into a state and hope for the best? I say no. If D.C .is to become a state it needs enough heft to be a real state rather than a jurisdictional oddity sandwiched between Maryland and Virginia. At the least, the new state of D.C. should comprise the existing Washington Metropolitan area. That area, also known as the National Capital Area contains D.C., the Maryland suburbs, Northern Virginia and one county in West Virginia. The National Capital Area is spread over 6,564 square miles and has a population of 6.3 million. Now that would be a real state.

The will of the people of New D.C. Any question of ethics needs to include the question of whether people living outside of D.C. want to be included in the new state. If 90% of the people in Calvert County, Md., would rather stay in Maryland than join the new state of D.C. it would be hard to ethically force them into New D.C. However, there are a lot of benefits to joining New D.C., including the fact that it would easily be America’s richest state. Who knows what the good people of Calvert County might decide. But most of all — it should ethically be their right to decide.

A unique situation. D.C. statehood is unique in that D.C. is specifically defined in the U.S. Constitution as not being in any of the particular states. It seems to me that the U.S. Constitution would need to be amended for D.C. to become a state. If so, how should that amendment work? Should the residents (or legislators) of Virginia, Maryland and West Virginia residing outside of the National Capital Area be allowed to vote? I say no. If the residents of Fairfax County want to be part of the New D.C. why should somebody from Richmond be able to stop them from their pursuit of happiness? The constitutional amendment needed to make D.C. a state should call for a one-time vote by residents of the National Capital Area and nobody else.

The great debate. Most people believe that a majority of citizens inside the National Capital Area but outside D.C. would vote “no” on joining New D.C.  I think this is shortsighted. The initial, knee-jerk reaction might well be somewhere between “no” and “hell no.” However, the proponents of New D.C. would start selling the idea of New D.C. to the impacted citizens. A new state constitution using the wealth of New D.C. to provide free college education to its residents might turn some heads. Local autonomy instead of Dillon’s Rule tyranny from Richmond might be very well received in Northern Virginia. Taxes raised for transportation in Montgomery County, Md., actually being spent on transportation in Montgomery County could be very attractive to the 1+ million residents of that jurisdiction. For once, the politicians would have to sell the idea of New DC., including its governance and revenue model, to the citizens it hopes to attract. Who knows — the political elites in Richmond and Annapolis might actually have to sharpen their pencils and promise changes that would keep the localities in their existing states. Imagine that — politicians being forced to listen to the electorate and act in the electorate’s best interests.

Just watching the Byrd Machine throwbacks in Richmond wet their pants as they contemplate the loss of taxes from Northern Virginia would be worth the price of admittance to this show.

This entry was posted in Courts and law, Demographics, Finance (government) and tagged DC, DC statehood, Rippert. Bookmark the permalink.