The Bear Truth About That Massachusetts Outbreak 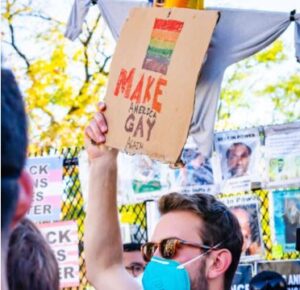 I have a little assignment for you before you read the rest of today’s post.

Yep, it’s a gathering of burly gay men who descend each summer on this Cape Cod enclave which is renowned for its eclectic shops and studios as well as its partying gay community. Like heterosexuals, gays come in all shapes and sizes and large, hairy men call themselves “bears.”

Much goes on during Bear Week that could spread germs. I’ll leave it there.

These are adults. They aren’t breaking any laws. I’m not judging.

I have nothing against bears or anyone else. But it’s worth noticing that Bear Week was held this summer in Provincetown, Massachusetts from July 10 through the 18th.

Contact tracing of so-called “breakthrough infections” of COVID infections in vaccinated individuals shot up to 364 people who were in Provincetown from July 3 through the 17th. Another 127 unvaccinated adults tested positive.

Of the infected people, 301 were male and the median age was 42.

Luckily, “only a handful” of those who tested positive were hospitalized, according to The Washington Post.

The CDC reports that “handful” was literally five. Four of those were vaccinated. That’s right, of the 469 mostly gay men infected during a week of revelry, five wound up in the hospital. The CDC does not have information on any underlying health conditions of those who were hospitalized or tested positive.

There were zero deaths, thank goodness.

But it was this outbreak that caused the breathless doomsday cult at the CDC to throw the country into a tizzy last week when they reversed themselves on the need for vaccinated Americans to sometimes wear masks. These purveyors of panic said vaccinated individuals in areas of high transmission – almost all of the U.S. – should wear masks indoors.

“This finding (that 74% of Provincetown’s infections were among vaccinated people) is concerning and was a pivotal discovery leading to CDC’s updated mask recommendation,” CDC Director Dr. Rochelle Walensky said in a statement.

Is it not possible that the partygoers in Provincetown were engaging in activities that might have made the spread rather easy?

Perhaps they were engaging in activities most of us avoid. Apparently the CDC believes the entire country should pay the price for Bear Week.

Here’s how conservative commentator Andrew Sullivan, who lives part-time in Provincetown, described the scene in a July 30 substack post that warned against applying what happened there in July to the rest of the nation:

Is Provincetown our future? Count me skeptical. In Fourth of July week, the town was completely swamped this year, followed swiftly by Bear Week; lines for the bars lasted for blocks; the bars themselves were packed; the weather was dreadful, forcing most of the crowd to pack tightly inside. A tiny town built for a few thousand residents has to absorb up to 40,000 in peak season. One bar in particular — the home for a dance party with the inspired name of “Fag Bash” — resembles a kind of dank dungeon where sweat drips from the ceiling and mold reaches up the walls. It might have been designed for viral transmission. A big swathe of the crowd had also just come from a week of Pride partying in New York City and were likely not, shall we say, at their immunological best.

Let me ask you something: Do you slow dance in the supermarket? Do you engage in deep kissing in your hair salon? Do you ever find yourself nuzzling strangers in a big box store?

If you’re vaccinated experts say you have an infinitesimal chance of a breakthrough infection if you avoid close contact with others.

I’m going to say this loud and clear: I am not wearing a mask in Virginia Beach because the partiers of Provincetown experienced a sharp outbreak that resulted in almost no serious illnesses.

The CDC and government officials should get a grip. Americans long ago realized that Covid was here to stay, even as they recognized the virus is serious, especially to the obese and the elderly. More than 90 percent of Virginians over the age of 65 have received at least one dose of a vaccine. Clearly, the vulnerable population understands the importance of vaccinating and is taking precautions.

Masks did not stop the sharp spike in cases in January and February and they won’t stop this current upturn, which, if history is any predictor, will go down by itself in a few weeks, as it has in the U.K.

Government officials need to stop trying to get the country to the unattainable goal of zero Covid. They also need to stop with the mask mandates and lockdowns that didn’t work before and won’t work now.

They should regard this one outlying incident of spread as the curiosity it is and stop using it to scare the general public.

We aren’t bears. Leave us alone.