The Systemic Racism of Monument Avenue 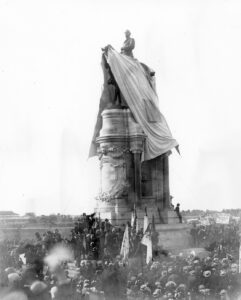 Richmond’s grand Monument Avenue, a double lane, tree lined thoroughfare, has been the epicenter of the Black Lives Matter campaign that has focused on the statues of several Confederate figures one the road, including Robert E. Lee, J.E.B. Stuart, Thomas “Stonewall” Jackson and Jefferson Davis.

All are up for removal, but the same foot-dragging that has for years protected the statues that some consider racist is at work today. Protestors have torn down Davis and have defaced the rest. On Sunday night, they nearly ripped down the Stuart statue as two city council members urged that it be removed on an emergency basis.

Lee’s statue has been ordered down by Gov. Ralph Northam, but the effort has been tied up in lawsuits by several property owners. One claims either that the original deed that gave the state the site for Lee included language that it could not be removed. Other plaintiffs, most anonymous,  claim that removing the statues would hurt their property values and their special tax status.

If anything smacks of white privilege and entitlement, this is it. But for more perspective, this article in The Atlantic neatly sums up the history behind the statues and the Avenue, noting that the issue has everything to do with rewriting Richmond’s history and making a marketing play to sell expensive and exclusive real estate decades after the Confederacy was suppressed.

After the war ended, African-American Richmonders were given a chance to help run the city and did so successfully for years. Then, white supremacists surfaced again and history was again rewritten. Restrictive covenants were introduced to prevent African-Americans from owning property along Monument Avenue. African-Americans were frightened to even be seen walking along the boulevard.

In this remarkable article, Kevin M. Levin, a Civil War historian who lives in Boston, writes that:

“On May 29, 1890, roughly 150,000 people gathered for the dedication of the Robert E. Lee monument in Richmond. It was an opportunity to celebrate a man who many believed embodied the virtues of the old South, the “Christian Warrior” who bravely fought to the bitter end for the Confederacy’s Lost Cause. The Richmond industrialist and former Confederate staff officer Archer Anderson predicted that the monument would continue to teach “generations yet unborn,” and that it would “stand as the embodiment of a brave and virtuous people’s ideal leader!”

Levin notes that Richmond had become a leading center of the “New South” in which local businessmen made deals with rich Northern industrialists. Lots of money was flowing

“By the turn of the 20th century, civic leaders in Richmond and elsewhere embraced the economic vision of a “new South” led, according to the historian Reiko Hillyer, by a “rising class of businessmen and industrialists who owed their growing economic power to alliances with northern business interests” and who “sought to promote an era of national reconciliation and a climate favorable to business and industrial expansion.” These men—bank presidents, manufacturers, lawyers, and real-estate developers—purchased lots and built impressive homes along Monument Avenue.”

The Civil War monuments were as much a real estate marketing ploy as they were authentic expressions of grief for defeated and dead Confederates. Of course, African-Americans had to be kept out during this period which resulted in the first Jim Crow laws:

“Real-estate companies also reassured potential buyers through restrictive covenants that “no lots can ever be sold or rented in MONUMENT AVENUE PARK to any person of African descent.” This was a reassuring message for white Richmonders during a time of unrest and uncertainty. Business and civic leaders worried about labor activism among the city’s black tobacco workers and elsewhere during this period of industrial expansion. Many still recalled with horror the brief but consequential period from 1879 to 1883, in which a biracial party known as the Readjusters controlled the wheels of government throughout the city and state. Large numbers of black Virginians voted, attended public schools, and were elected to local and state positions, all under the leadership of the former Confederate general William Mahone.”

It didn’t stop there:

“In addition to private restrictive covenants that ensured only white families would reside in the shadows of Lee, Jackson, Stuart, Maury, and Davis, the city of Richmond passed a number of discriminatory ordinances, including one in 1911 that restricted African American residents to those city blocks in which they already constituted a majority. In 1929, the city passed another ordinance that, relying on Virginia’s newly adopted “racial-integrity law,” prohibited a person from living in a neighborhood where he or she was prevented from marrying any member of the majority population.

“These restrictions all but guaranteed that most of the neighborhood around Monument Avenue would remain exclusively white for decades, and it also brought into sharp focus the racial and political inequities for black Richmonders. “I cannot go on Monument Ave.,” Robert Leon Bacon wrote to the governor of Virginia in 1955, “and visit a white girl for fear of being ‘lynched’ or beaten up or arrested or electrocuted.” Bacon called for “colored people to rise up and demand our rights and first class privileges, as citizens should always have.”

Such systemic racism prevailed into the 1950s and 1960s when Virginia’s white leadership proclaimed a policy of “Massive Resistance” to school integration. Other racist laws were finally struck down by the courts and federal government in the 1960s.

This is the backdrop of the current controversy that clouds Monument Avenue.

It is amazing that as police confront protestors, arrest them, gas them and shoot them with rubber bullets, some residents of the Avenue can file lawsuits and remain anonymous. Only two have shown enough guts the have their names listed as plaintiffs.

It is yet another “kick the can” down the road delaying tactic that has worked so well for decades. This time, however, protestors are having none of it.