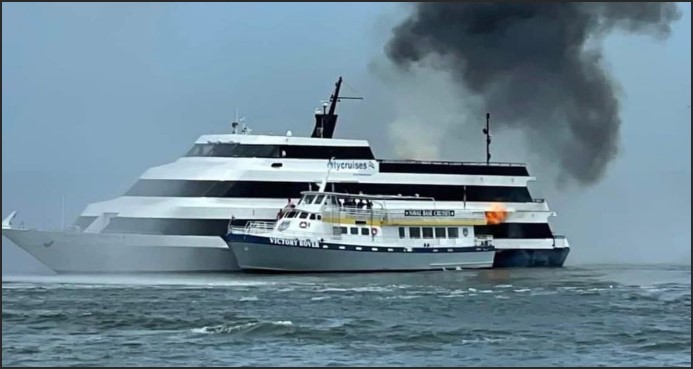 Every city with a decent harbor seems to have one: a vessel that takes passengers out for short lunch, dinner or party cruises.

If you’ve lived in Tidewater for more than a decade, chances are you found yourself at one time or another on board The Spirit of Norfolk. Since it arrived in town in 1978, the boat was popular for weddings, proms, reunions, office parties and, well, booze cruises. With three dining decks, a bar and dance floor, untold thousands of passengers have partied on board the “yacht-style dining vessel,” as it was billed.

The Spirit was docked at Norfolk’s Waterside summer and winter.

On Tuesday afternoon, with 89 school children on board — including fifth graders from Newport News and a large contingent of Virginia Beach kindergartners — the Spirit of Norfolk caught fire and was eventually consumed by flames. The cause of the inferno is under investigation.

The Spirit appears to be a total loss.

Here’s what one passenger showed me that was on the Victory Rover. The Rover picked up dozens of people off the Spirit of Norfolk after it caught fire- here you can see the flames. @WTKR3 pic.twitter.com/yDktJtNhVX

The story has a happy ending, though. The 106 passengers and crew got off the boat safely, thanks to the skill, quick thinking and remarkable coordination of the Navy, Coast Guard, local fire departments and of course, the crew.

Oh, and the rapid response of the Victory Rover, a rival-but-smaller cruising vessel that was taking passengers on a tour of the Norfolk Naval Station when the distress call went out.

When I worked at The Virginian-Pilot we would periodically have fire drills. We hated them. The alarm would blare when we scribes believed we were in a particularly brilliant stage of writing and so we would hunker down at our desks and pretend we didn’t hear the cacophony.

Eventually, someone would come along and holler at us to hit the sidewalk, where we’d fume until we could get back to our desks.

Fortunately, the crew on the Spirit of Norfolk paid close attention to their safety drills.

The parent of one 10-year-old who was on board told The Pilot that the evacuation was remarkably quick and calm.

Within a minute or so of noticing the severity of the fire, (Jason) Sleeth said he saw emergency vessels “screaming” towards the burning ship. He praised the staff for their quick response and ability to keep everyone calm as they disembarked onto another ship.

“That was my biggest fear, man, was trying to wrangle a bunch of kindergartners and fifth graders together to not freak out and do what we needed to do,” Sleeth said. “[The crew] reacted quickly, like they had been through this process before almost, and knew exactly what to do so I can’t thank them enough.

“My first thought was, ‘Holy cow this is going to be pandemonium’ … but the parents, the staff, the chaperones — everybody did an amazing job,” he added. “And the kids were very, very brave.”

Two Navy tug boats eventually held the Victory Rover close to the Spirit as the kids — wearing orange life preservers — were handed over the railing. Video footage shows an orderly, polite rescue, with no panic despite large clouds of black smoke and visible flames.

It appears they were not able to contain the fire in the engine room of the Spirit of Norfolk.

The boat is low in the water with fire running through the decks. pic.twitter.com/5cOByG2uq1

On Tuesday’s radio show Mike and I speculated about the near-tragedy, saying that we were sure the crew never expected a dire emergency on its short trips up the Elizabeth River.

On the contrary, said a caller named John, a former crew member on the Spirit.

John said they reviewed procedures “before every single shift.” And every Spirit crew member knew what to do in the event of an emergency.

“Fire is always a danger on the water,” John reminded us. “Especially when you’re carrying so much diesel fuel.”

No doubt the fuel was the reason the Spirit burned for hours and through the night. It was still smoldering Wednesday morning.

When I drove along Waterside Drive on Thursday, the waterfront looked lonely without the Spirit of Norfolk at the dock.

Tuesday’s emergency was a poignant reminder of the many people – civilian and military – in our area who are trained to save lives and willing to spring into action when needed. Because of them 89 schoolchildren are alive with a story to tell for the rest of their lives.

The charred Spirit of Norfolk is in the process of being dewatered as it continues to smolder at Naval Station Norfolk.

A press conference to share updates is set for 11 a.m. https://t.co/E7w9dFdJuQ

This entry was posted in Disasters and disaster preparedness and tagged Kerry Dougherty. Bookmark the permalink.