The Marijuana Legalization Debate in Virginia: Lessons from Colorado 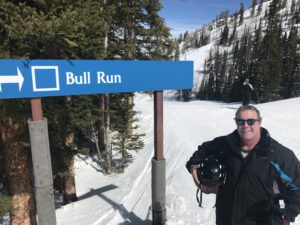 It’s a long way from Colorado to Virginia!

Elevated thinking.  I recently had the opportunity to do some skiing in Colorado. I hadn’t been to Colorado since the state legalized recreational marijuana use in 2014. I expected to see a Cheech and Chong movie played out on a vast scale high in the Rocky Mountains. That expectation went unmet.  Instead, I saw an American town where legal marijuana use has been incorporated into everyday life in a barely noticeable manner. Colorado has more pot shops than Starbucks outlets but you wouldn’t know that from a cursory visit. All of which got me thinking – what has been the marijuana legalization experience in Colorado and what lessons are there for Virginia?

Nil sine numine. “Nothing without providence.”  Residents of The Centennial State believe Colorado is guided by a “divine will.” After five years of “divine will” has legal pot turned into Rastafarian revelry or Puritanical perfidy? My unscientific poll of Coloradans riding various chairlifts and gondolas with me established a consensus of … “more good than bad”.

Timeline. Colorado didn’t jump straight to legalization of recreational marijuana use. The journey took years and came in “fits and starts”.

1975 – Colorado becomes one of 10 states to decriminalize marijuana based on The National Commission on Marijuana and Drug Abuse report issued by the Shafer Commission (during the Nixon administration).  The commission’s report favored ending marijuana prohibition. That recommendation was ignored by The White House and, apparently, the Virginia General Assembly.

Nov. 2000 – Colorado passes Amendment 20 allowing for the medical use of marijuana (54% support).

2006 – Amendment 44, a statewide measure for legalizing marijuana, fails with 58% of voters voting “no”.

Nov. 2009 – Breckenridge, CO expands decriminalization of pot to include no penalties for personal possession of less than one ounce.  (73% support)

May 28, 2013 – Gov. John Hickenlooper signs a series of bills which specify how recreational marijuana will be regulated in Colorado. Stoners across the state immediately light up in celebration and spend the rest of the day slowly repeating the name “Hickenlooper.”

Sept 9, 2013 – Final regulations from Colorado Department of Revenue are adopted.

5 Years After. After 5 years of legal marijuana use in Colorado there is no shortage of opinion on how the “green experiment” has gone. John Hickenlooper finished his second term as governor in January of this year and is now running for president. However, in April 2018, Gov. Hickenlooper said that he “wouldn’t rule out” making marijuana illegal again. He also said such a move was unlikely. In other words, the jury is still out.

The good. The money is coming in and the kids are all right. In 2018 marijuana sales in Colorado eclipsed $1.5 billion generating $267m in state revenue. The state and local taxes raised through marijuana sales were used to fund a variety of programs including the school construction program called out in the original legalization amendment.  A five year retrospective report looked at the non-financial impacts of legalized pot. There has been no increased use of pot by young people. Graduation rates in Colorado have increased over the five-year period. Total marijuana arrests dropped by half.

The bad. Stoned driving and the black market remain problems. Adult usage and marijuana related hospitalizations have risen. Approximately 7% of driving under the influence citations were for ‘marijuana only.” Fatal car crashes where the driver tested above the legal limit for THC were 56 in 2016 and 35 in 2017. Black market sales (as measured by plants seized on public lands) have increased 73% over the five year period.

The ugly. The technology of marijuana commercialization and increased potency of the plants themselves have greatly expanded the means by which cannabis can be ingested. Experienced marijuana users that I interviewed frequently told me that they had unintentionally overused cannabis. These long-time stoners have adjusted their behavior to meet the new realities of legal weed and have even coined some helpful catch phrases. For example, “indica will put you in ‘da couch” was a pearl of wisdom I heard a couple of times. Another concern is ease of use. Historically, smoking marijuana was a smelly and dirty business that required paraphernalia beyond the weed itself. Today’s legal market is based on disposable smokeless vape pens, edibles like cookies and gummies and carbonated beverages. Gone are the days of dank weed stinking up a car or the smell of marijuana smoke hanging over a stoner like smog in L.A. Anybody who wants to get surreptitiously high can do so without drawing any attention to themselves. Advances in the technology of THC delivery may turn out to cause more of an increase in usage than the mere fact that marijuana is now legal.

Lessons for Virginia. First things first – legalization is going to happen in Virginia. Michigan legalized marijuana last November and New Jersey and Pennsylvania have legalization bills in process right now. There may be other states. Meanwhile, Corey Booker is trying to make recreational marijuana use legal nationally while Tim Kaine is supporting national decriminalization. The dam isn’t about to break, the dam is breaking right now. The race is on for competitive standing in this newly semi-legal industry. While Virginia begrudgingly agrees to legalize hemp (see Steve Haner’s column) Colorado growers have 5 years of experience addressing the legal marijuana market which is expected to reach $146.4 billion by 2025.  Prohibiting Virginia farmers from participating in this market is short sighted and simple minded.

This is starting to look like the days of banking deregulation. While Virginia’s hapless state government slept North Carolina’s did not. The result? A whole lot of banks in Charlotte rather than Richmond. Virginia needs to accept that states like Colorado have made legal marijuana a success and move on. One possibility would be to restrict Virginia’s approved grow sites to impoverished rural areas. Implement an excise tax and spend that tax on education in those impoverished rural areas. Otherwise, when the inevitable legalization happens in Virginia, the stoners in NoVa and hipsters in Richmond will be vapeing Colorado grass instead of Virginia weed. And the fops and dandies in our General Assembly will still be scuttling about wondering what can be done to help rural Virginia.