The Greens, Their Quiet Partners, and Trains 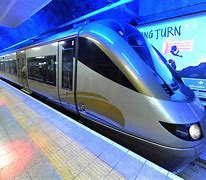 I love trains. Always have.

Took my first train ride at a very young age with my mother and brother from D.C. to Birmingham to visit mom’s family.

After the Navy, my private sector work was based in McLean. I had regular business in New York  I took Amtrak whenever feasible.

Trains on the eastern corridor of Amtrak are powered by electricity currently provided by gas-fired power plants. There is a faltering and breathtakingly expensive attempt in California to create a high-speed electric rail system. That is pretty much it for electric trains other than short-haul commuters.

But the freight rail locomotives that transport 43% of America’s long-haul freight and Amtrak passenger locomotives outside Amtrak’s Northeast corridor are powered by diesel. Lots of it.

Axios reported in August that “High-speed rail remains a faraway dream in Virginia.” In dreamy progressive fashion, that article reported “costs” of overseas high-speed train trips as if they included only the costs of the passenger tickets.

The damn-the-torpedoes greens, and the commercial interests that hope to get unimaginably wealthy feeding their obsessions, will leave no stone unturned or dollar unspent to transform trains to electric.

Virginia, of course, has its own “not-for-profit” pushing the profitable part of that agenda.

It files with the IRS as “Virginia High Speed Rail Development Committee.” Mr. Plougher appears from its Form 990’s to be its only employee. It claims charitable status as “an organization that normally receives a substantial part of its support from a governmental unit or from the general public.” It claimed 100% of that support was from the public.

Let’s see who the public is.

Under the corporate structure of VHSR, what they pay Mr. Plougher is tax deductible. Is America great or what?

Diesel locomotives. Let’s look at diesel fuel, a primary target of the greens.

Some of that was aviation fuel, some truck fuel; but this story is about trains.

Freight trains. Trains are used in the U.S. transportation system primarily for freight shipments. The Staggers Rail Act in 1980 deregulated trains and made them profitable, and competitive.

Productivity rose 172% between 1981 and 2000, while rates decreased by 55% (after accounting for inflation). Rail’s share of the American freight market rose to 43%, the highest for any rich country.

The greens say, offhandedly, that we will power all trains with electricity provided by green sources.

Passenger Transportation. I share the first of three Environmental Impact Statements filed in support of the electrification of the Amtrak corridor from New Haven to Boston. This first EIS is 321 pages long.

It was only for the electrification of Acela tracks, not the freight tracks.

For passenger trips, the pre-conversion energy consumption for the existing commuter trains between New Haven and Boston was 2.5 million gallons of diesel fuel annually.

The study projected an increase in the use of natural gas for energy generation of a billion cubic feet per year. For just Acela service. Just between New Haven and Boston.

The green new deal. Electric trains are, of course, a feature of the future foreseen by the Biden green new deal. “Amtrak Joe” is famously a fan of passenger rail, riding it daily from Delaware to Washington in his decades in the senate.

On cue, “Mayor Pete,” now and mystifyingly the Secretary of Transportation, has a vision. From another not-for-profit called the U.S. High Speed Rail Association comes this:

$80 billion is not even close if we’re going to meet Secretary Buttigieg’s goal of becoming a world leader in high-speed rail.

Just to catch up to where China is now, we’re going to need to invest a trillion over the next 10 years.”

Fortunately, we have better forecasting tools than that. We can look at the costs of:

So we know that a trillion dollars for Mayor Pete’s vision of a national network of high speed electric passenger trains is not close either. By a  lot.

a leading advisor to projects that are shaping the future of high-speed passenger rail transportation in the United States.

Another such organization, The High Speed Rail Alliance, also has Alstom as a “partner” along with Siemens, a major Alstom competitor.

Reliability of the grid. It does not take a scientist to know that without electricity, electric trains stop.

In the rail transport sector, more and more railway lines are electrified, and the electric motors are gradually replacing diesel engines. Such modernization of the railways leads to dependence on electricity and therefore their operation can significantly cause danger by the electricity outage. Almost all technological equipment on the rail is dependent on electricity. Therefore, it is important to pay attention to the resilience of the elements (of the grid).

Grid failures from dependence on green energy in Texas and California should provide a lesson to the greens. But they wish them away by appealing to future technology that is, to put the best face on it, visionary.

Transmission lines. Catenary lines carry electricity from the generated source to the electric locomotive. They are as vulnerable, and as dangerous, as every other overhead electricity line.

Third rails are not an alternative because they are, well, third rails.

Bottom line.  The costs of converting passenger rail to electric will be in the trillions of dollars. Any other estimate is deliberately misleading or fatuous.

The costs of doing the same to freight trains escapes even the otherwise limitless vision of the greens. So we will still need oceans of diesel. That makes freight trains, like airplanes, unmentionable in green-speak lest someone wonders where all of that diesel will come from.

Finally, next time you listen to greens discuss the environment, remember their partners who plan to make passenger trains green.

The color of money.

This entry was posted in Entrepreneurialism, Environment, Transportation and tagged James A. Bacon. Bookmark the permalink.