The Death of David Koch 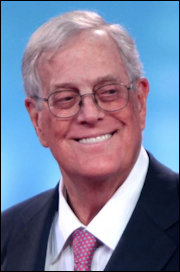 Imagine the coincidence. On Friday I was reading business writer Christopher Leonard’s excellent “Kochland” book on the hard-right, billionaire industrialists, Charles and David Koch. I put my Nook down for a moment to check the news. David Koch had died at age 79.

He, his brother, the rest of the family and their sprawling, secretive business empire based on oil trading and petrochemicals are fascinating topics. And, the Kochs, especially Charles, have had a huge influence in Virginia as they spread their gospel of free market libertarianism.

David Koch, who lived in New York City rather than Wichita, the headquarters of Koch Industries, had been known as a man-about-town.He was a bachelor until later in life and gave freely to medical research and the arts.

Gifts include $100 million for cancer research art his alma mater, the Massachusetts Institute of Technology where he still held the record for the most points ever scored in a school basketball game. He also gave $100 million to underwrite a ballet theater at the Lincoln Center in New York.

When he died, David and his brother were each worth about $50 billion. They got their money by running the family business, which buys and sells oil and distributes it through pipelines. They also have petrochemical plants where they make plastics used in windows, clothing and a lot more.

With Charles taking the lead, they developed a tough corporate control system that involved loyalty, secrecy and tough discipline. According to Leonard’s even-handed book, they Kochs were accused of making millions by cheating oil producers by under-reporting the amount of crude oil they received. The company settled the case. That and smart business led to success.

The Kochs became fanatics against government regulation, especially in the oil business, which they inherited from their father in the 1960s. They fought oversight and regulation. They later were pioneers in efforts to deny climate change was occurring and that humans were responsible for it. These are similar themes one often reads about in Bacon’s Rebellion.

In time, the Kochs, led by Charles, got heavily involved in politics. David ran for vice president in 1980 for the Libertarian Party. He lost.

They started a vast program of making big donations to push their political views. They helped create the Cato Institute, a Washington-based Libertarian think tank along with Americans for Prosperity, a large funding operation. They supported the American Legislative Exchange Council, which creates templates of conservative positions. They are then distributed to state legislatures, which only have to fill in the blanks and get them passed.

The Virginia General Assembly is one legislature that has been involved with ALEC’s policies but the Kochs have gone much further in the Old Dominion.

Their shining example is George Mason University, a former commuter school in Northern Virginia. Led by Charles, the Kochs put together funding that was funneled into the schools Institute for Humane Studies, which promoted such things has opposing minimum wage hikes and questions the idea that there is wealth inequality, according to reporting by the Associated Press.

A foundation run by Charles offered $10 million if GMU renamed its law school after Antonin Scalia, the late Supreme Court justice who was a conservative.

Another Koch effort involved the Mercatus Institute, a free market think tank at GMU. Not only did it receive Koch money, a 1992 agreement allowed the Charles Koch Foundation to hire two tenured professors of its choosing, according to the Associated Press.

The agreement was later modified that the Foundation could review the final applicants but the school made hiring decisions. It had similar agreements with a number of other colleges, including West Virginia University.

Koch money was controversial. It sparked a student movement at GMU called “UnKoch My University.” The group sued in court to force the school to release its Koch agreements under the Freedom of Information Act.

Among other groups accepting Koch money was the Thomas Jefferson Institute of Public Policy, a Northern Virginia-based free market think tank, according to the left-leaning group Sourcewatch. The institute once sponsored this blog.

A number of GMU professors have said that the Koch money didn’t really influence much as far as subject matter and it is true that plenty of left-leaning billionaires, such as Mike Bloomberg and George Soros, have made similar donations.

But in Virginia and elsewhere, the impact that David and his brother have made is remarkable.