The Border Crisis Is Here, Virginia 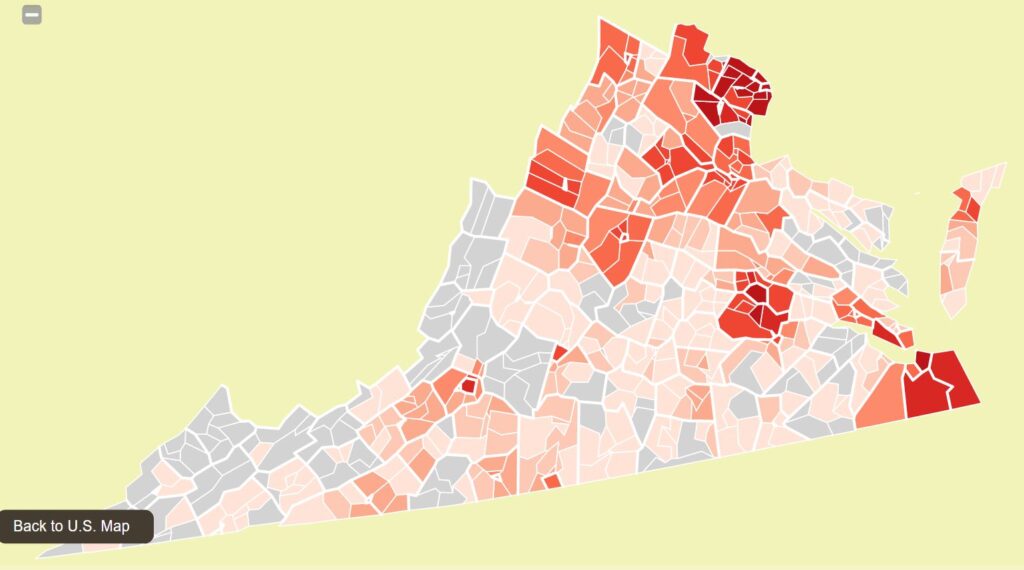 Off the top of your head, which states would you expect to be the top destinations for illegal immigrants? California, of course. Texas. Florida. New York. Would you expect Virginia to be in the Top 10?

Relatively speaking, Virginia has been less impacted by the mass rush on the border that commenced several months ago. Only 923 cases have been filed in Virginia in the last 90 days, ranking it 11th in the country. Still, the Old Dominion is in the front lines of the illegal immigration crisis to a greater degree than I ever imagined. Unfortunately, our public policy debate does not reflect this reality.

As tracked by the TRAC Immigration database, the biggest backlogs are in Northern Virginia, followed by Richmond and Hampton Roads. There are significant backlogs in the northern piedmont and northern Shenandoah Valley as well. Outside of Roanoke, the immigration case backlog is negligible in the other two-thirds of the state.

Based on the surging number of Hispanics in Virginia — 9.8% of the population in 2019 — I have long surmised that Virginia has become home to a large illegal immigration population. But it is difficult to sort Hispanics who entered the country illegally from those who immigrated legally, and those whose ancestors have been Americans for generations (in some case preceding English-speaking settlers).

Another imperfect measure of illegal immigrants in Virginia is the number of English Language Learners in public schools. While Spanish is the largest ELL language spoken, there are literally dozens of other languages spoken.

The case-backlog number provides a third metric for guesstimating the number of illegal immigrants, but it has limitations as well. It represents only a snapshot in time: it doesn’t reflect cases that have been adjudicated. Nor does it count illegals who slipped the net entirely.

Still, the numbers do shed light on some of Virginia’s social problems. For example, the “Richmond” county subdivision in the TRAC database has 3,545 backlogged cases — the second largest number of any Virginia subdivision in the database. We know from Census data that the Hispanic population in Richmond has soared in recent years. And we know from public school data that Hispanic students comprise a significant and growing percentage of the student body in Richmond public schools.

Academic performance, as measured by Standards of Learning exams and graduation rates, have been especially abysmal among Richmond’s Hispanic students. It is not unreasonable to assume that this failure can be attributed in part to the fact that many Hispanic students are illegals. Not only do illegals struggle as Spanish speakers in a school system for English speakers, some unknown percentage come from developing nations with notoriously poor school systems where their education may have been deficient before they ever came to Virginia.

Bacon’s bottom line: The public policy debate in Virginia would be better informed if it took into account the reality of large-scale illegal immigration. It is absurd to use unequal educational outcomes as proof of systemic racism against “brown” people in Virginia when unequal outcomes can be explained by the fact that a large percentage of “brown” people came here illegally, speak English as a second language, and likely suffer from the drawback of an inadequate education in their home countries.

This entry was posted in Immigration, Race and race relations and tagged James A. Bacon. Bookmark the permalink.