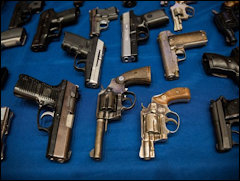 There was extensive commentary on my post yesterday that recommended expanded use of stop and frisk in an attempt to reduce gun violence. Given the demonstrated interest in the subject, I offer three suggestions that go further.

Increase federal prosecutions. Federal laws, penalties, detention hearings and prosecutions are a far more formidable deterrent to street use of guns than their state and local counterparts.

Virginia should increase its referrals of firearms violations to federal authorities in the same manner and using the same joint task forces as it does with drug violations.

Criminals do not have to be rocket scientists to understand the differences in consequences between prosecutions under state or local laws vs. federal firearms laws. Their lawyers will explain it to them.

Let Virginia Attorneys General prosecute gun crimes directly without local concurrence. The far left is conflicted between their hatred of guns and their desire to reduce prison populations. When they speak of gun control, they generally do not mean no bail and heavy sentences for gun crimes.

I will go out on a limb and suggest that perhaps a woke Commonwealth’s Attorney plea bargaining a felony gun crime down to a misdemeanor is not the way to reduce gun violence.

If they are serious about the issue, the Governor and General Assembly will add gun violations to the list in Code of Virginia § 2.2-511 (below) of crimes that the Attorney General can prosecute without the concurrence of a local Commonwealth’s Attorney.

Designate the Circuit Courts as courts of original jurisdiction for all gun crimes. Juvenile and domestic relations district courts currently hear all criminal matters involving juveniles. Amend the law so that the first courts of record, Circuit Courts, hear all gun cases regardless of the age of the defendant. This will bring consistency to pre-trial detention, bail and sentencing and provide a court record for appeal.

Example – Drug charges and joint task forces. Drug charges can be brought either by a state or a federal authority, and the decision as to which one depends largely upon the investigating body that discovered the alleged criminal activity.

In many cases with drug charges, state and local governments are a part of a joint task force that include federal authorities. They will use their discretion to determine whether or not it is appropriate to file state or federal charges or both.

Double jeopardy – no. Michael Vick was prosecuted, convicted and sentenced in both federal and state courts for dog fighting.

Federal gun laws. My previous columns discussed stop and frisk and the commentary led me to post the following federal statutes.

A. 18 USC § 922(x)(1). Punishable by up to 1 year imprisonment unless transferor had reason to believe juvenile would commit crime of violence with gun or ammunition, then up to 10 years imprisonment. May not sell, deliver or transfer a handgun or handgun-only ammunition to a person who is under age 18;

In addition to the federal laws governing firearms and minors listed above, various other federal offenses punishable by up to 5 or 10 years imprisonment, depending upon specific violation include:

A. 26 USC § 5861. Generally unlawful to make or possess any unregistered machine gun or any part designed or intended exclusively for use in converting a weapon into such weapon, firearm silencer, sawed-off shotgun or rifle which meet specific length criteria, or destructive device (as defined in 26 USC § 5845); see also 18 USC § 922(o): generally unlawful to possess or transfer machine guns made on or after May 19, 1986;

C. 18 USC § 922(k). Generally unlawful to possess or receive any firearm that has moved in interstate commerce which lacks a serial number or contains an altered or obliterated serial number.

Authority of Attorneys General for prosecution of gun violations. I also recommend revision to Code of Virginia § 2.2-511. (Effective January 1, 2022) Criminal cases.  That law allows the Attorney General to prosecute certain crimes without the concurrence of the elected local Commonwealth’s Attorney.  The list currently includes:

I ask the candidates for the General Assembly, Attorney General and Governor to support adding violations of gun laws to that list to account for rogue Commonwealth’s Attorneys who abuse their prosecutorial discretion.

Summary. I urge Virginia candidates for state offices to announce their support or non-support for:

Those measures can make a major difference both in deterrence to reduce the number of guns on the streets and in appropriate and consistent prosecutions of gun-related crimes to keep gun violators off the streets.

This entry was posted in Courts and law, Crime , corrections and law enforcement, Gun rights and tagged James Sherlock. Bookmark the permalink.